Spotlight on TOUCH OF A GHOST by L.M. Brown 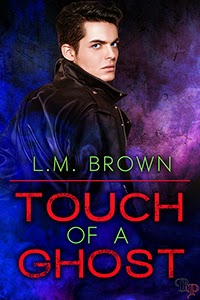 Blurb
What if you could only touch your lover one night of the year? Halloween night is all you have when in a relationship with a ghost.

Drew Jessop wants a life without ghosts. He doesn’t want to see, hear, or talk to them. Ignoring them should be relatively simple. But Drew soon finds that Benji Richards, an eternally gorgeous ghost from the fifties, is not so easy to ignore.
Halloween night is approaching and both Drew and Benji know what it could mean for them. From sunset to sunrise, it is the one night of the year when a mortal can feel the touch of a ghost.

Excerpt
Drew leaned forward and put his empty bottle on the table. The match had finished and the commentators were recapping the highlights, so Drew reached for the remote control.
"Well, thank you for having us." Flora stood up and stretched, as though her joints were still giving her grief as they had apparently done in life.
Drew turned off the television and picked up the crisp packet together with the nearly empty bowl. He tossed the last few crisps into his mouth as he stood up and walked into the kitchen. He left the beer bottles on the table as he contemplated whether to have another. Remembering he had an early start in the morning, he decided against drinking too much. He had a feeling Flora might have an opinion on alcohol intake too. However, when he turned back toward the living area, Flora had vanished.
Benji, on the other hand, still lingered. He remained on the sofa, his arm stretched along the back and his chin resting on it as he stared at Drew directly.
"You're very rude, you know?" Benji commented idly. "Not saying a single word to us all evening like that. You could at least have said hello."
Drew ignored him as he turned off the lights.
"I know you can see us. Your eyes give you away."
Drew suspected Benji might be guessing, but if he said a single word in response that guess would be confirmed. He had to keep quiet. That way he could still maintain a normal life.
"Not going to admit it, huh?" Benji said. "Well, I'll stop by again tomorrow. Maybe you'll be more talkative then. If you are, I might just tell you how I know you're gay, if you ask nicely."With that comment, Benji flashed Drew one final killer smile and vanished from the room.
Drew reacted to Benji the same way he would any other handsome man. His mind may tell him Benji was off limits, but his body thought otherwise. Drew wondered whether he could keep up the pretense of not seeing and hearing the ghosts who were as real to him as the rest of the human race. If this evening was anything to go by, it might not be as easy as he thought.

Bio
L.M. Brown lives in England, in a quaint little village time doesn't seem to have touched. No, wait a minute—that's the retirement biography. Right now, she is in England in a medium sized town no one has ever heard of, so she won't bore you with the details. Keeping her company are numerous sexy men. Shejust wishes they weren't all inside her head.
L.M. believes there is nothing hotter or sweeter than two men in love with each other…unless it is three.
She loves hearing from readers so don't be shy.
Where to find L.M. Brown:
Website & Blog—http://lmbrownauthor.wordpress.com/
Facebook—https://www.facebook.com/L.M.Brown.author
Twitter—@LMBrownAuthor