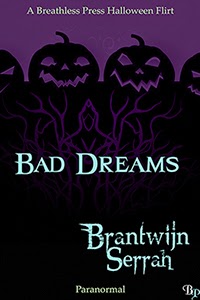 Blurb:
Priya can't sleep, but that's not the worst of her troubles. She's starting to hallucinate, and every night she's seeing a very wicked male...

The doctor calls it “sleep paralysis.” Her husband doesn't realize anything's wrong. But night after night, Priya finds herself stuck between sleep and waking, perfectly aware and perfectly helpless, as a looming dark creature hovers over her. He promises pleasure so sinful, Priya can't resist. Bound in his coils, she's starting to lose herself...

Dreary and exhausted, Priya couldn't find the energy to do anything besides plod off to bed. She crawled under the covers on her belly, praying there would be no delirious, dark imaginings when she closed her eyes.
Then—seemingly immediately—the paralysis took her. It replaced her weary, aching fatigue with a rabid, feverish, and animal need. Her body thrilled in madly constrained helplessness; she flushed hot under the weight of gleaming, glinting eyes.
She found it difficult to breathe. A heavy, winding coil, serpentine, wrapped around her throat, and more twisted around her wrists, pinning them behind her back. Priya wanted to scream, her higher brain waking into a red panic. Deeper inside, though, like a naughty child set loose to misbehave, the primal Priya, the visceral, hungry, and joyous Priya needed it, fighting to move if only so she could squirm happily against her restraints.
The fear and the pleasure were hard to separate. The world of the dream flooded her mind, dark and vague. Her thoughts and will were tugged down and down, while the shadows of her bedroom swam above her.
A body lay on top of hers, felt more than seen. Those silvery eyes locked with hers, like a hypnotist entrancing her as prey, a python with a bird. Her nakedness was all she could think about, vulnerable and open to the thing pinning her down. As the strange presence caressed her, she remembered...she'd wanted this. She'd asked Ron to blindfold and bind her, and now she was bound quite tightly, powerless as the demanding malevolence took everything he hungered for.