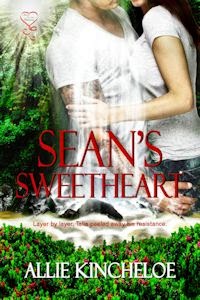 Sean has spent five years cleaning up his life. He’s shoved his past behind him and built a profitable business in the town’s most popular dance club. Falling in love with a college sophomore wasn’t in his plans. But, from the moment he rescued Talia, she brings out his every protective instinct. He tries to resist getting involved on a personal level. Talia’s persistence, however, is stronger than his will.
Despite just ending an abusive relationship, Talia finds an instant connection with a man unlike any she’s dated before. Older, tattooed, and totally inappropriate for her, Talia couldn’t keep Sean off her mind, especially once he calls her “sweetheart” in that deep drawl of his.
When Talia is in danger, they discover just how strong their relationship is. Can Sean and his sweetheart make things last when horrors from their pasts come back to haunt them and family seems determined to keep them apart?
Excerpt:

He’d have to piss her off more often if she’d look at him like that. It was a heck of a turn-on for her to be confident enough to stand up to him. He liked his women to have some spunk. Damn, she’s gorgeous when all worked up. He wondered if her eyes filled with such fire when she made love.

He moved closer and she retreated in response until she bumped into the counter. Tilting forward and placing his hands on the granite next to her hips, he surrounded Talia with his arms. He whispered low in her ear, “Anyone ever tell you how stunning you are when you are mad? Your eyes are sparkling and so damn expressive. Sweetheart, you’re really making me forget that we need to be just friends.”

He nuzzled her throat, inhaling her sweet scent. Her hands reached up to fiddle with the button placket on his shirt. When she leaned toward him, he knew she’d forgiven him. She shuddered and he pulled back to look at her. When she licked her lips, he couldn’t take it anymore. Fuck being just friends. He needed to taste her again. Groaning, he bent his head toward hers. A mere second before his lips touched hers Zane kicked the door open and walked in with another box.


As a busy mother of five, Allie sneaks time to write between breakfast and tickles. Always a Kentucky girl at heart, she currently makes her home near Nashville.
Author links:
http://www.alliekincheloe.com