Spotlight on FOR ONE NIGHT ONLY by Allie A.Burrow 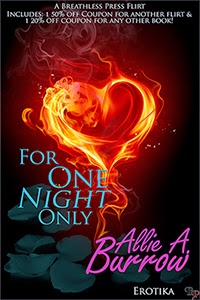 Kate Powell only went and fell for the soldier she’d met just once before he had to jet off on a year-long posting overseas.

Seven months in, and Kate is hornier than a blue wildebeest in mating season with only her battery-powered friend for relief. Her skills as a pen-pal scale new heights, but then a text message arrives out of the blue.

*Allie has chosen to donate all royalties from 'For One Night only' and 'Serviced: Volume 1' to the UK charity Help For Heroes*

Safely enveloped in the darkness of the alcove, the bass pounded through the soles of Kate's boots and echoed inside her ribs. She lunged and caught Mark’s face in her hands, pulling him down to kiss him, her tongue forcing a route past his surprised lips and delving into the wetness of his mouth. "Take me," she breathed. Her hand stole over the carved ridges of his stomach, following the arrow-shaped path down to where it disappeared inside his jeans. "Please..."

His mouth opened and closed and he glanced over his shoulder at the heaving dance floor. "But—"

"No buts." She reached for his fly, undoing it quickly, but instead of finding another layer of clothing, his dick sprang free and elicited a gasp from her throat. "I need this"—she fisted her hand around it, stroking him, and his eyes squeezed shut, his jaw jutting out as his head tipped back—"I need you...inside me"—she swirled her hand over the engorged head and his entire body jerked—"now."

Mark's eyes flew open and even in the dim lighting, she saw his pupils dilate, the naked desire on his face almost frightening. His fingers skipped over the back of her neck and lost themselves in her hair, getting tangled in the shoulder-length tresses she had loosely pinned up. The gentle touch was at odds with the fierce hunger in his gaze. Electric shocks surged through the many nerve endings, connected directly to her core, and she had to lean into his hand, let him support the weight of her head, suddenly too heavy to keep upright under her own steam.

He tilted it back and locked his gaze onto hers, issuing her with a challenge. "If we're going to do this"—he leaned into her, his lips rasping her ear—"right here, right now"—his gravelly voice resonated within her, hungry, powerful—"we're doing it my way."

Staggered by the transformation from man to soldier, her need for him ramped up another notch and it was all she could do to move her head the tiniest fraction. His eyes searched hers for an answer, the wait agonizing, until finally, he dipped his head. Achingly tender, his lips flitted over the top of hers, like rose petals blowing in the wind. Her eyelids fluttered closed, cracking under the strain of keeping them open.

Sweet, yet maddening, Kate yearned to take control and deepen the kiss, but he broke off every time she tried before catching her lower lip between his teeth as if to punish her. Their sharp edges sank into her swollen flesh without breaking the surface, his tongue immediately soothing any pain. The all-conquering, take-no-prisoners warrior had arrived.

About Allie A. Burrow… 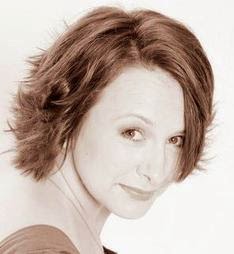 Allie A. Burrow writes sensual contemporary love stories that are both sweet and romantic but with a liberal dash of heat added. When not burning up the pages, you'll mostly find her marauding as Aurelia B. Rowl where she pretends to be far more sweet and innocent and writes young adult, new adult, and contemporary romance stories.

She lives on the edge of the Peak District in the UK with her very understanding husband, their two fantastic children, and their mad rescue mutt who doesn’t mind being used as a sounding post and source of inspiration. Too often lost in her own world, she regularly wows her family with curious, hastily thrown together meals as a result of getting too caught up with her latest writing project… or five!… and she has developed the fine art of ignoring the housework.

To find out even more about Allie you can visit her website www.allieaburrow.com. You can also check out her main writing persona, Aurelia, by visiting www.aureliabrowl.com

You can also find her hanging out on: