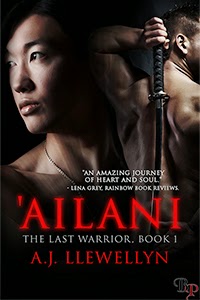 Thanks so much for having me here! My new release with Breathless Press is 'Ailani: The Last Warrior, the first book in my Hawaiian paranormal trilogy. It's about Lio, a young man who has a bad breakup, but soon discovers that because of it, his life is about to change in more ways than he could have ever dreamed.
Sometimes, you have to let those doors close on love so another one opens...even if it is a door to scary dreams and a whole realm of paranormal reality that most people refuse to believe exists.

I wrote it during a visit to Hawaii early last year. What surprised me was how the characters gripped me and the storyline came together. I consulted a couple of kahuna, Hawaiian high priests and discussed my ideas. Lio becomes a Hawaiian Superman, called upon by the pantheon of Hawaiian gods to help people in distress.
Not one of the kahuna acted like the idea was outlandish. They listened to me and gave me great advice and information. That was a wonderful surprise!
I hated leaving the world I built for Lio and his new lover, the sexy and dynamic Kord. Reality is not at all what it's cracked up to be...

LOL! With writing? Oh yes. I get up very early and feed my animals and I make coffee. Then I write for an hour. My dog, Athena, paces. It sort of helps me write at breakneck speed. Then I stop to take her out for her first walk of the day at 7.30am. I love that time of day. Even in this searing summer heat we're having in LA, the day is fresh and cool. I can tell who's been illegally watering their lawn and who hasn't...and I do my best writing during those wonderful walks with her!

Nobody really in my private life. My whole family was against it. I suppose because I was a morbid child and my early stories were all about horses and death. The heroine always found out she had a terminal illness and died at the end. So did the horses!
As I grew older and discovered romance novels, by the time I was twelve, Victoria Holt's novels were my passion. She influenced me hugely. She always set her stories in interesting places and the locations were as much a part of the story as the people in it. Those are the stories I like to read - and write. There is a reason that all these years later her stories are still considered among the best gothic romances ever published.

I do a lot of volunteer work, including my local library, Braille Institute, and a feline rescue. I have very little spare time, but I enjoy reading and surfing and hiking with friends and with my pup.

So many books! The two sequels to 'Ailani are coming soon to Breathless Press. Palehua: The Last Warrior 2 comes out soon and then Makahiki: The Last Warrior Book 3 is in edits as we speak. I also have Back to Black: Makaha Beach Detectives, the first book in a brand new series of contemporary M/M mysteries set in Honolulu is coming out with Breathless Press soon. Readers should check my website for info - and also I have free blog stories and a couple of free short stories there.

After a bad breakup, Lio rents a cheap house with magical views. It seems the perfect solution, but the house has a haunted connection with an ancient statue. Once unearthed, it gives Lio the power of…THE LAST WARRIOR…

When Lio's lover cheats on him, he's forced to give up what he thought was the idyllic romance he's lived with Maks, including their stunning, scenic Waikiki apartment. He rents a cheap house with magical views on the other side of the island. So why is it so cheap?

He soon becomes haunted by dreams in which a fearsome yet sexy Hawaiian man begs him to rescue him. Lio is certain he's going nuts until one night in the midst of a tropical rainstorm he follows the man's urgings and digs a hole in a church graveyard. He finds a gigantic, ancient stone statue with scary eyes…that soon gives Lio the power of…THE LAST WARRIOR…

We shared a slice of the pie I'd never tried before. It was like eating a giant orange Creamsicle. That's when I remembered why Hau'ula was familiar. I'd come here many, many years ago on a school excursion.
"Isn't there a great trail into the rainforest around here?" I asked him.
"Why, yes." He grinned at me.
I recalled quite clearly going with my class. We'd bought ice creams from a portable ice cream stand as we were leaving. Orange Creamsicles.
"Do you hike much?" I asked.
"Every chance I get."
"Wow, that's great."
"You like to hike?" he asked, pushing the last bite of pie toward me.
"Yeah, my ex hated it, though."
"I'm always up for a hike," he said. "Give me a shout some time."
Speaking of shouting, the volume rose considerably with some newcomers so we gave up our table. Outside, I inhaled a mouthful of sweet night air.
He was giving me so many mixed signals, or so I thought. Sometimes he reached out to me, then pulled his hand away. I was certain he was staring at my mouth in a hungry way. I sure as hell wanted him to kiss me. He smiled at me a lot. Maybe he was being kind, but I felt certain we were on a date. When he took me to his own home, I didn't think I was wrong. His beach cottage sat right on the reef, and I was stunned by his uninterrupted view of the ocean.
Kord's life seemed to be straight out of my childhood. Everything on the walls and sideboards was found art. He'd discovered gigantic shells, sea glass balls, bleached pieces of driftwood that almost looked like antlers. He'd even made a hammock out of an old fisherman's net.
He showed me his home office, which took up most of the space. He pointed to the garage. "That's where I build stuff."
I had a sense he didn't bring many people here. I almost felt glad I didn't see any chick stuff. His home spoke of a solitary existence.
"Take a seat." He pointed outside. I swung in one of the aged rocking chairs on the lanai as he brought me a beer. Longboard. My favorite.
"You had a recent breakup too," I said. "Isn't that what you told Marcella?"
"Sure. It never works out for me with women." He scowled.
"Why's that? You're a great guy. Handsome, hard-working—"
"Thanks. That's part of the problem. I love to work."
The words swayed between us like a coconut palm. "I have a hard time with women because...because..."
He didn't finish the sentence. He didn't want me to know he was bi. I sensed he didn't want to give me ideas. It was okay. I didn't need any. I was too busy licking my own wounds and couldn't have handled any confusion.
When he dropped me home and kissed me on the lips, I felt my spirit and my body reacting.
"Have a great night," he said, then watched as I let myself inside Dad's house.
As I closed and locked the door behind me, I felt something shifting. I couldn't explain it as I leaned with my back against the blue stained-glass mermaid and felt her coolness seep into my hot skin.
Aaaahhh...something had changed. Something good. I touched my lips. We'd had a great date. No, not a date. He was being kind.
So why did he kiss me?
We'd had a swell time. A gentle time. I hadn't had such a sweet evening with a man in a very long time. When I'd cleaned my teeth, I fell into bed. I could almost feel his dark hair on my face, his lips on mine. I tasted salty tears. Yeah...something was changing. I didn't know what.
I dreamed of fishermen's nets, mad laughter, and mud.
At around three o'clock in the morning, I awoke from a strange dream.
No. They were not coming back. I wouldn't allow them to come back. Not the dreams. Not those ones. I closed my ears to the voices whispering...
Remember...remember...
I worked very hard to forget. To think of nothing but the soft press of Kord's lips, wishing for more. So much more.

A.J. Llewellyn is an author whose obsession with myth, magic, love, and romance might have led to serious stalking charges had it not been for the ability to write. Thanks to the existence of some very patient publishers, A.J.'s days are spent writing, reading, and dreaming up new worlds. A.J. has definitely stopped Google-searching former boyfriends and given up all ambition to taste-test every cupcake in the universe to produce over 150 published gay erotic romance novels.
A.J. wants you to read them all.
You can find this author lurking on Facebook and Twitter—part-time class clown being another occupation. When not writing or reading, A.J.'s other passions include juggling, kite-boarding, and spending a fortune buying upgrade apps for Diner Dash.
Please connect with A.J. here at:
www.ajllewellyn.com
www.facebook.com/aj.llewellyn
www.twitter.com/ajllewellyn