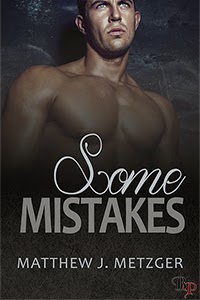 But then the mistake that destroyed Craig's life in the first place comes crawling out of the past, and in coping with that, Craig learns that there are both bad mistakes and good mistakes. And some mistakes are for the best.

2.  What was one of the most surprising things you learned in creating your story?
Learning about Damian was pretty surprising. I usually know a lot more about a character than ever makes it into the story, but this time I felt like I was learning about him as Craig did. I had no idea what his last name was until he eventually came out with it; I didn't know he had a stepfather until he complained about him. It was a big divergence from the norm, and a fun ride to be on!

3.  Do you have any interesting or quirks or rituals?
I don't think so? There's nothing particularly odd I do when I'm writing - I think, anyway! - and there's nothing I have to do first, or have to be wearing, or anything like that. Maybe I'm just a bit dull when I write!

4.  What authors or friends influenced you in helping you become a writer?
Well...nobody really. I'm not a big reader - haven't been for years and years now - and there's only one friend I really share my writing with. I'm very solitary about it. I suppose I've always been writing, and always known that I always would be, so there was no need for anybody to guide me towards it. It just sort of happened.

5.  What does your family think about your career as a published author?
It's mostly the thing nobody's really interested in or talks about. My family are all scientists and engineers - I'm a statistician by day myself - and creative writing was never seen as something to be impressed with when I was younger. Now there's a passing 'oh, how's the books going?' at Christmases but otherwise they don't care. They're more interested in my day job - and I don't mind, it's kind of nice to have the writing to myself.

6.  Besides writing, what other interests do you have?
I'm a huge traveller. I absolutely love travelling and seeing the world. I'm currently saving up for a month-long trip to New Zealand, and I have a couple of long weekends planned for Iceland and Germany in 2015. I want to start writing science fiction again so I can explore other parts of the world and how they - especially the second and third world - would look in a more advanced era.

7.  Can you tell us what is coming up next for you?
Hopefully my immediate next novel is Private, a young adult novel about coming out in a conservative military family, but that's still seeking a home so I don't know whether I've been successful with it yet.

In terms of adult romance, I recently finished Thicker Than Bone - and lots of detail and deleted scenes can be found here - which is about Ali Barraclough's choice when saving his brother's life means saving the life of the man who tried to kill Ali's boyfriend four years ago. It was both fun and heart-wrenching to write, and Ali and boyfriend Yazid are a gorgeous couple, so I'm looking forward to shining it up and getting it out there!

8.  How can readers connect with you online?
I can be found on Facebook, Twitter, or at my website. The website especially is brand new and shiny, and I'm filling it up with deleted scenes, chatter about books and all sorts pretty quickly at the minute.


Craig's life is defined by ugly mistakes. This 'arrangement' with sex-mad Damian is another - but maybe some mistakes aren't so bad after all...

Craig is not good at commitment. Relationships are to be avoided at all costs—but when Damian and their evolving coffee-order code fail to elicit anything more serious than Damian's last name, Craig begins to think that this is not a mistake at all, but an opportunity for guilt-free fun, without the prospect of breaking any hearts. Craig cannot afford to be found out, but it looks like Damian isn't interested in asking the right questions.
Then his mother dies. The mistake that ruined Craig's life in the first place is dragged kicking and screaming out of the past—and this casual arrangement with Damian begins to show its true colours.

Excerpt:
As the song changes, the dancers shift, and a neon light ricochets off that fair hair. Craig necks the rest of his glass and moves. He rolls off the bar, predatory, and advances on the shadowed dancer like something on the hunt. Damian is dancing with someone, not quite touching but almost there, and Craig hooks a finger into the top of Damian's tight jeans to turn him, cupping those narrow hips in both hands.


"Hello," Damian says—or, rather, mouths. The music is too loud, but Craig doesn't need to hear him. The way those lips lift at the left side of his face is enough, and then Damian drapes both arms oh-so-casually over Craig's shoulders and begins to sway idly against him. He's wearing those jeans that do something sinful to his arse, and Craig slides both hands into the back pockets. Damian just grins.
"Buy you a drink?" Craig asks against Damian's ear, audible only by the extreme proximity, and bites the lobe lightly when Damian squirms against his hands. Damian has a bony arse, all things considered, but he can move his hips better than any woman in the frankly sensual way he dances, fluid as water, and it more than makes up for it. He twists and flexes as he sways, and if Craig didn't already know his measurements, he'd be able to calculate them now.
Damian nods. Craig guides him to the bar, one hand still in a back pocket, and they lounge against it waiting for the bartender to be free. Damian slips a hand between Craig's shirt and jeans, and his fingers are hot.
"What are you doing here?" he asks, just about audible now they're off the dance floor itself. Craig smirks. Damian's asked this question every Friday night since the second time Craig picked him up, and Craig never gives the same answer.
"Keeping tabs," he says this time, and Damian grins. He's had a few drinks already, judging by the lax way the smile blossoms, and the way he tips his head like his tight, almost strict, control over his own body has slipped a little. It's enticing, and Craig pulls him in and nips at his neck. When there's no shivery wriggle, he bites harder, and Damian sighs. Yep. Not quite drunk yet, but definitely heading there.
"On what?" Damian murmurs and kisses Craig's stubble.
"On who else you play around with."
Damian laughs. There's no illusions here - no strings - and it's what Craig needs. There's no expectations with Damian. They don't go on dates, and they don't know each other outside of sex and a coffee code about sex. Damian doesn't come here to pick up Craig, specifically. And when one of them loses interest and this all stops, it won't matter. There'll be no hideous fallout.
That knowledge is freeing, and it's why Craig keeps a hand in Damian's back pocket— literally—and orders for him at the bar. He knows what Damian drinks by now. The nasty, paint-stripper variety of vodka that Edge of Pleasure serves. Sometimes with a mixer, sometimes straight. Craig always orders it mixed with something, because he hates the taste of vodka alone on Damian's tongue.
"You trying to get me drunk?" Damian asks when Craig slides two double vodka and Cokes along the top of the bar.
"Yeah."
"Why?" Damian asks, but knocks the first one back despite the question.
"You're easier to handle when you're smashed," Craig says honestly.
Damian smirks, knocking back the second before looping his arms around Craig's neck again and whispering in his ear. "You can't handle me drunk or sober."
"I can try."
"Mm, you could." Damian peels himself away. Craig watches him, watches who else watches him, and follows to cup those narrow hips and dance with him. He doesn't really know the music, and he's not much of a dancer, but it's easy enough to match Damian's rhythm and get his attention now and then with another bruise on his neck or another kiss.
Craig hooks a finger into the top of Damian's jeans and keeps him close. He kisses his neck and glowers over Damian's shoulder at another man who keeps hovering. Craig has plans for tonight, and the only unpredictable variable is when Damian has had enough of dancing.
Or rather, enough of dancing vertically.


Matthew J. Metzger is the front for a twenty-three-year-old British author writing on the side of a demanding day job, and not wishing to be fully out of the closet just yet. Matthew is as much a creation as the characters in his books, and was invented in time for the release of his debut young adult novel, Our Last Summer.
Since then, Matthew has published on many more novels in the gay romance and young adult genres, with his work focusing on the grittier contemporary issues such as disability, illness, mental health, domestic violence and conflict in relationships. His trilogy on music and depression, beginning with Vivaldi in the Dark in December 2013, has been billed as both heartbreaking and intense. His fifth novel, Enough, was a bestseller within two weeks of publication, and at the opposite end of the spectrum is far more light-hearted. He is currently working on four new projects for 2015, about cancer, superheroes and unrequited love, coming out, and breaking up. (Not all at the same time.)
When he's not writing, Matthew is sleeping or working. Most of his time is spent thinking about writing or actually doing it. He can be stalked on Twitter and Facebook, as well as his Wordpress blog, and welcomes contact from readers and fellow authors alike.