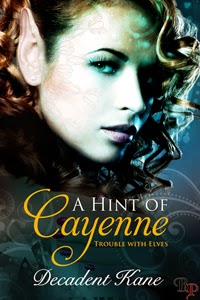 A Hint of cayenne is a unique tale about an elfess and her struggles to not lose her heart as she does everything within her power to take care of her family.

That the original ending I had for the story, wasn't actually the ending- they had plenty more to say and that took me a couple months to figure out.

I have to eat smarties as Ai work at the computer.

There are so many I can hardly list them all here- but know they all deserve recognition so I humbly decline naming any one person or two people, etc....

Some of them are speculative, especially since I write with more heat in my books, but many have come to support me and my decisions.

I'm working on a story about the Drow king and another about demons.


Two bounty hunting elves must put aside their attraction when a malevolent fairy comes up for grabs. Cayenne and Hawthorne both need the twenty gold reward, but only one can walk away with it.

Cayenne and Hawthorn go toe to toe as they compete against each other, and their attraction, for a bounty that could solve everything...for one of them. Hawthorn has a gambling debt to pay, and Cayenne wants to provide a real home for her sister.
Heat flares between the two despite their differences, which infuriates Cayenne to no end. Hawthorn wants to wring Cayenne's neck, right after having his way with her. However, his gambling demons come back to haunt them both. The dark drow don't take kindly to having someone welch on their debts. Can Hawthorn get out of trouble with a dark elf before Cayenne and her sister pay the price?

He didn't want to have to drag her all the way to a tree. It was bad enough he'd need to tie her up. Elfess plus honey would be a nice treat for the malevolent fairy. He'd be more than willing to come back for a fresh bite. The disease inside him wouldn't settle for anything less once it smelled the flesh and honey mix, like sugar to ants. There was no other way the bounty would come back otherwise, and if he didn't pay off his gambling debt, then someone would be sent for him. Sent to hurt him until he paid. Mother Earth forgive him for his trespasses against this female. If he thought the bounty would come for a male dipped in honey, he'd do it himself, but the fear she would put off would be all consuming for the wicked Malevolent that had taken over the creature.
He waited for the trees to surround them, for plenty of space between the hunter office and Cayenne. When she figured out what he was doing to her, he wanted to be far enough no one would hear her foul mouth.
"So where are we headed?" Cayenne asked.
"Go for that skinny tree over to the left." His voice came out low and even, thankfully. He chose the skinniest tree he could so the rope would fit around it and her. If he worked fast enough and took her by surprise, she wouldn't know what he was doing until it was too late. Besides, she carried a good right hook, and he didn't want to feel it again so soon.
Cayenne sauntered over to the brown trunk and stopped. She glanced up the tree and then back down to the ground. "What's so special about this one?"
Thorn took a deep breath. His heart protested loudly in his chest. If he was going to do this, now was his chance.
He rushed her with the rope stretched out in his hands. She slammed into the tree with an oof. He kept his body pressed roughly up against hers, twisted the rope around her wrists, and then closed his arms around the trunk. His fingers worked quick to tie the knot on the other side.
"What the fuck are you doing?" Her voice came out in a high shrill.
He didn't answer her. If she was confused and irate, it would increase the lure like whip cream on a human sundae. He hoped she didn't become too afraid, and as soon as the spell was broken, he'd tell her he'd come back for her. Cayenne struggled against the restraints.
"Hawthorn! You bark rot! What have you done?"


An elfess in human form, Decadent enjoys dipping her fingers into the human realm where she took pen to paper and began the tales of the trouble with elves. Her obsessions include reading, Dean Winchester, and honey.
She will devour your soul with glimpses of the feral ridden drow elves, with their dark skin and soul consuming. She'll sneak morsels of naughty thoughts to you via goblins, and seduce you into stepping inside the elven realm where females disappear when lust takes over among other elfish troubles.
Beware the sprites.
Follow the wisps.
But never look a drow elf king in the eyes...
Find Decadent Kane
FB : https://www.facebook.com/profile.php?id=100008217340227
Twitter: https://twitter.com/DecadentKane
Blog: http://decadentkane.blogspot.com/
Goodreads: https://www.goodreads.com/user/show/23398789-decadent-kane
Newsletter: https://www.facebook.com/DecadentKane/app_100265896690345