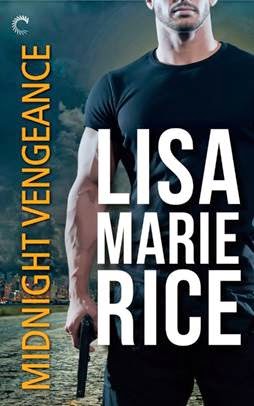 Can you tell us about your new release, Midnight Vengeance?


Oh yeah, gladly! This is one of my favorite books, probably because it gestated so long. We first met Jacko a couple of books ago, a really rough and tough former SEAL whose molecules were rearranged when he spent an hour listening to his boss’s wife playing the harp. Allegra’s music is beautiful, ethereal, miles away from the heavy metal that is Jacko’s usual soundtrack.

You start a novel at a moment of change for the characters. Jacko has been wildly attracted to a beautiful woman who is worlds away from his usual casual girlfriends—biker chicks who like it rough. Lauren isn’t anything like them and clearly he’s not her type either. Jacko should stay far, far away from someone like Lauren and he would—if he could. The thing is—he can’t.

No matter how many times he tells himself to walk away from her, his feet simply won’t obey. Which is crazy, right? Because what would a beautiful woman, a frigging artist, want with him?

And Lauren in turn doesn’t quite know what to do with Jacko. She’s not his type. His type is young and fast and stacked. Sure, Jacko is around a lot. A lot. Every time she turns around, it seems, there he is. Helping her, driving her around, just…there.
Now how much fun is this scenario? Two people from different walks of life circling each other, each scared to make a move.

Luckily, a homicidal maniac steps in and acts as Cupid.

Jacko is just taken unawares by the depths of his feelings. He has no place to put them, no space in his head that recognizes them. But the feelings are there and they are real.
Jacko is unlike anyone Lauren has ever met. Her former boyfriends were high-born and gently bred and their shooting skills and combat skills never entered the equation.
But Jacko has hidden depths and when danger comes knocking Lauren has a chance to see just what Jacko is made of.
What made you start writing sexy romantic suspense?

My inspiration came from books more than movies, actually. Writers such as Nora Roberts and Suzanne Brockmann really fired me up. Somehow Hollywood has yet to do really deep and really good romantic suspense. Maybe because a romantic suspense gives equal space to hero and heroine—it’s a journey of two people-- and movies focus more on the heroes.

To me, writing sexy romantic suspense is a no brainer. Make it over the top in every way. Make the hero and heroine super brave and smart, make the villains heart-stoppingly dangerous, make the love story burn bright with romantic and sexual energy.

You’ve said before that it is really fun “being” your heroines while writing about them. Can you tell us about the process of becoming your character?


Heroines are often a little idealized, just as romance heroes are idealized. I like putting myself into the head of my heroines and I loved being Lauren. She’s under huge stress and on the run. She’s in survival mode and her life is stripped bare, completely raw. She has to see to the heart of things which is why she can completely appreciate Jacko, a man whose path she wouldn’t ordinarily cross in normal life. But her life isn’t normal. She is forced to see things more clearly and she sees Jacko—sees his strength and deep character and sense of loyalty.

When I sat down and ‘became’ Lauren I put myself in the shoes of a young woman in constant danger and I became very grateful for all the good things in my life and for the fact that I didn’t have a crazy guy gunning for me.
Of course, if you do happen to have a crazy guy gunning for you, having a guy like Jacko by your side, in love with you and more than willing to give his life for you, would be a big plus.

Writing these books I also get to live through these intense love affairs and that is a huge plus!

Do you ever have to do any research when it comes to your character’s professions?


I think anyone who has read my books realizes that I do a lot of research. I mean a lot. Many of my heroes are former military and I have done a lot of reading of soldiers’ memoirs and books on geopolitics. I also happen to find them fascinating. I’ve had scientist heroines and I make a point of reading up on at least the basics of their professions. I research everything in as much detail as I can because I like to give details in my writing, I try to make the reader feel like she is right there with the hero and heroine, saving each other and saving the day.

Where is your favorite place to write?

Definitely my favorite place to write is my study. I have a fabulous study that looks out over a gorgeous terrace and treetops and in the distance a sweeping valley. The Ionian Sea is a bright blue line on the horizon and if I had binoculars strong enough, I could 15 miles away the Greek temple where Pythagorus taught math.

What do you drink and snack on while you are writing?


I try to eat regularly and try not to snack while I’m writing and certainly never eat at my desk. But I do drinks tons of tea, probably too much. Earl Grey and chai tea are my favorites. I try to get up at least once an hour to stretch and walk around and have to force myself not to go into the kitchen and get myself a snack. Alas, I live in Italy and the food is fabulous, so I need to exercise huge restraint. (I know, poor me!)

What are your top tips for aspiring writers?


It sounds trite but write write write and read read read. The usual estimate is that you have to write a million words of bad writing to start writing well. I know it sounds like a lot but most prolific writers wrote a lot before they started publishing. Nowadays you can write fan fiction and join writing groups and you should just write your heart out. And one day, it’s as if you slipped into a new and higher gear, and the writing takes off.

Read a lot, always. Study writers you admire, figure out how they manage to keep you enthralled and touch your heart. It’s a gift but it is also a technique. Learn all the techniques then pare away what doesn’t work for you until you have the beating heart of what you are meant to write.

If you weren’t writing books, what else would you like to do?


Well, I had a previous life as a simultaneous interpreter and translator, so this is Life 2.0. I travelled extensively, interpreted fascinating people, including heads of state, worked for international institutions and learned how the world works. So I guess you could say I’ve already ticked off everything on my Bucket List and now I’m doing precisely what I was meant to do. I love writing books and hope to die right in the middle of writing another romance!

What are you working on next?

I’m writing the sequel to Midnight Vengeance, Midnight Promises, and I am having a ton of fun. Look for it in January 2015!

Learn more about Lisa Marie Rice by visiting her website:  http://www.lisamariericebooks.com/
at August 22, 2014