Q &A with Lorelie Brown! 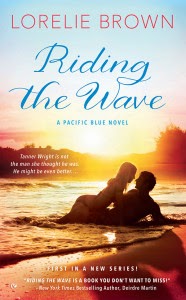 Riding the Wave is about Tanner Wright, who’s returned to his hometown after nearly a decade, and Avalon Knox, his sister’s best friend and the photographer assigned to shadow him on his way to a World Championship Tour win. He hopes. But there’s dark secrets (yay!) and angsty sexing (double yay!) that may interrupt his plans.

Buy link for  Riding the Wave

2.  What makes your story special to you?

I love surfers, and I love beaches and I love Tanner and Avalon. Tanner is a good guy who’s been hiding a secret kind of against his will. Avalon’s the type of girl who’ll do absolutely anything for her friends. When those two things go head to head, all sorts of sparky things happen. Whee!
And really, surfers wander around beautiful places shirtless, doing stunts of physical prowess. How are they not already everywhere in romance?? I’ve only found a couple, a gross injustice that I needed to rectify. ;)

When I was twelve, I wrote what was essentially fan fic of Anne Rice’s Vampire Lestat books. I remember reading parts to my aunt and grandmother. They were pleasantly surprised that what I’d written wasn’t completely terrible. (That’s grand praise in my family, seriously.) I was hooked. By high school I even knew I wanted to write romance. I feel like that insanely lucky girl who gets to marry her high school sweetheart.

The kids are off to school around 7, and I usually go to the gym. I’m at my desk by 9. I’ll intersperse lots of twitter and a little tumblr and write lots of words. Lunch break is around noon, sometimes with a side of Netflix to go with. Then I can usually get a couple more hours in before the kids come home from school. If I’m really deep in a project, I’ll do another couple hours after homework and before dinner. And then maybe an hour or two after dinner. With music on noise-cancelling headphones.

I write a lot of my romance novels to the background of Discovery ID murder shows. It’s probably a little odd. That dramatic, emotional grovel scene I hope you’ll like so much? Written with Deadly Women playing on Netflix. Coz nothing says love like a little stabbing!

How little control authors have over the process. Of course this is changing with the advent of self-publishing, and I’ve also been really lucky with publishers who include me in the process. But I still remember the first time I realized that authors don’t always even pick the title of a book. Total “wut??” feeling.

They’re really proud of me, but at the same time they seem kind of baffled that it’s in the romance genre. Yet totally unsurprised also, because I’ve been reading romance since I was like 14, despite their protests. Both my mom and my dad had journalism careers initially, then moved into law. They’d be way more comfortable if I wrote non-fiction! But they do their best to support me, too.

I’ve been training for my first triathlon this August! I’m really looking forward to the swim portion, feeling fairly confident about the run, and completely terrified of the bike ride. LOL. It’d probably help if I could make myself bike more than once every other week…I’m probably so screwed.

The sequel to Riding the Wave is already written and I’m working on edits for it right now! Ahead in the Heat will be out in January. A surfer coming back from a shoulder injury battles inappropriate feelings for his physical therapist.
But first, from my co-written work as Katie Porter, comes Own this August. It’s the first in our Command Force Alpha series. Domination, submission and sensual persuasion are risks eagerly explored by a special ops protégé and the wild-child daughter of CFA’s stalwart leader.

Woohoo! Can't wait to read this whole series, Lorelie! Not a surfer, but can't wait for you to pull us into the world of surfing!