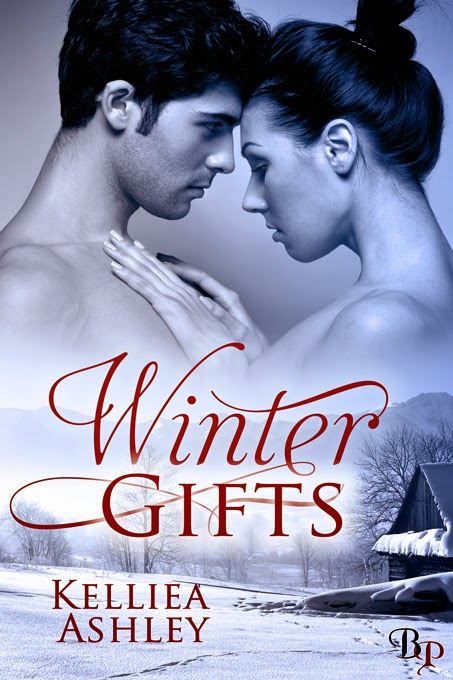 Thank you for hosting me today. I'm super excited to share my very first print book with you. Winter Gifts is my very first e-book that made it to publication. I'm very partial to it for more reasons than that, though. I had the privilege to try my hand at dairy farming for almost five years. Maxine Grant's story of finding love while enjoying her way of life on her family's farm came from my love of the animals, hard work, and communion with nature.

Maxine's character taught me how proud I am of who I've become and where I started from. She's proud of who she is and will fight to keep the things that matter to her.

I read about other authors who need music or total quiet or the perfect place to write and it perplexes me. It might be that I've taught myself to block out everyone and everything while I write, but I can jot down my ideas anywhere. Yes, my husband has complained that I also block him out, but he is very understanding.

I've always wanted to write romance stories, but that hobby exploded when I found a best friend who enjoyed the same thing. Our parents joked that if we were too quiet, then they knew we were either reading or writing.

My family is very supportive and proud of my work. I was nervous at first when they found out. The idea of my aunts reading my stories made me a wreck until my aunt started bugging me to tell her the plot to my next book. She is my biggest fan now.

I work full time at a pharmacy, so between that and writing my free time is spent with my husband and our two furbabies. We have a dog named Sam and a cat named Copperkitty.

I have several flirts coming out for Breathless Press in the next few months. I'm working on a Haunted House story, a Christmas story, and the next installments for my two series. There's always something that peeks my interest and makes me want to write new story lines.

I love to hear from my readers either on my websites, or in reviews. I want to thank Romance Reviews for being so kind as to invite me by today. I can't wait to talk with all of you soon.

A blizzard, a hunky chef, and an accident-prone milkmaid—ingredients for a passionate fling, or a recipe for a blazing romance, hot enough for a lifetime of winters?

When Maxine Grant finds herself out in the freezing rain of a winter storm, an unlikely hero comes to her rescue. Brice Vanzetti is not only a moody hunky chef, he’s the owner of a new black Lexus sporting a red scratch on the bumper. A red that perfectly matches Jilly, her beloved car. Maxine isn’t looking for a knight in shining armor, but is it too much to ask that he comes with a sense of humor along with the hot, hard body?
Brice already has a lot on his plate just keeping his restaurant running. He doesn’t have the time to deal with a woman who drives a rust bucket and doesn’t know when to come in out of the icy rain. She may have left a mark on his car, but Brice is determined she won’t put a dent in his resolve to remain a bachelor. No matter how sexy she looks when she’s mad!
Forced to seek shelter together in his house, more heats up than Brice’s hot chocolate! Stormed in with nowhere to go, Brice and Maxine can keep their differences between them, or give in to the sensual heat and accept the gifts winter has bestowed upon them.


Excerpt:
"Miss Grant, what can I do for you this morning? Let me guess, you want me to turn my car around so you can hit the front bumper?" His unfriendly sarcasm irked her right out of her friendly mood.
"Can I come in a second?" Max wanted to toss her check in his arrogant face and leave before he could get another slam to her character in, but she held her ground. He seemed to consider her for a moment and then stepped back to hold the door open for her. At least his father had instilled some good manners on the handsome devil. Max moved to step past him, but her heavy boots caught on the strip of metal separating the restaurant's carpet from the cement. She would have pitched forward and fallen flat on her face if his muscular arm hadn't snapped out to catch her.
"Damn, you're a walking disaster waiting to happen!" Brice righted her before letting go of the door. "Why don’t you stay right here and tell me why you've come to see me." He placed his hands on his hips in a confrontational stance that would have made a full-sized man nervous. Max took a deep breath and turned toward him.
"Thank you." She grudgingly remembered her manners before giving in to the strong urge to kick him in the chins for being rude. So much for those manners, she mentally shrugged as she clenched her fists at her sides.
"Out with it. I've got a lot of prep work to do this morning." His impatience was evident in the harsh set of his jaw as he watched her with suspicious eyes.
"You're such a joy to talk to." She met his sarcasm with her own. "I came to give you this." She yanked off her mitten before pulling a folded check out of her pocket. She held it out to him. He looked at it as if it were a poisonous snake she'd whipped out instead of a check. She heaved a frustrated sigh. "I called a friend, told him about the damage to your bumper, and he gave me an estimate. This will cover the cost as long as you don't have them replace the entire bumper. Take it, it won't bite." She coaxed him with the tone of voice she used on the kids when they didn't want to try new things.
"I told you not to worry about it." He stood like an immovable statue. One that wasn't the least bit grateful for her offer to pay.
"No, you told me I couldn't afford to pay for it. I can." She waved the check at him.
"You're from the Grant farm, then." His gray eyes narrowed at her. The flesh on the back of her neck rose and she shivered in her coat.
"Yes. I want to pay for what I did to your car. Let me." She thrust the check at him once more.
"Your money isn't wanted. I'll handle the repairs myself. You can leave, now." He dismissed her and started to walk past her.
"Excuse me?" She grabbed his arm, her fingers registering the tight muscle beneath the soft gray sweater he was wearing. She fought the urge to let him go and run for the door, but instead she held her ground as he stared down at her fingers. "My money is just as good as anyone else's around this town. I damaged your flipping car, so I'm paying for it." She let go of his arm awkwardly.
"My 'flipping' car?" Brice stared down at her with an inherited arrogance that annoyed her, pricking her temper into over drive.
"I work with kids. I don't swear, but your crumby attitude is testing my control here. Take the stinking check, Vanzetti." She thrust the check out to him once more.


Kelliea Ashley lives near the Canadian Border in upstate New York with her husband, a cat named Copperkitty, a dog named Sammy, and several fish, who do not have names and are very lucky her husband feeds them.
Kelliea grew up an only child with a devoted single mother. She looked at books as companions and writing as a favorite escape. She has always been a bookworm who steadfastly refused to give up her paperbacks until her loving hubby bought her a Kindle for Christmas. Secretly she still adores the smell of a well read book, but sh… don’t tell her husband.
She has a habit in the form of chocolate and loves a glass of sweet red wine. Romance has always been her favorite genre because she sees the miracle and magic in finding ones’ true love.