Q & A with Iyana Jenna 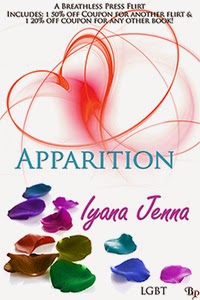 Hi! My newest release is titled Apparition. It’s about a couple, Drew and Zach, who live on different cities but on Halloween, Zach suddenly appeared in Drew’s place and vanished again just like that.

I don’t know if it’s a quirk or not but it’s been years I only write on my cell phone on my way to the office and back home. I can’t write when I face the computer but perhaps that’s because there are too many temptations, the Internet, for example. LOL.

I was greatly inspired by JRR Tolkien’s The Lord of the Rings. All right, it started with fan fiction, but the most important thing is that it gets you to write, right? :)

I think their reaction is more or less the same as mine, amazed! I sometimes still can’t believe myself when I see my stories on Amazon. But I know my family supports me. My mom is always excited if I tell her about the ranks my stories get. Sometimes I don’t talk about them for a while and she’ll ask.

Reading, that’s for sure. I also like watching movies or TV series, listening to music, and lately making some snacks or pudding as a challenge with my colleagues. :)

I will have another release with Breathless Press but I don’t have the date yet. It’s called Not Mistaken Identity. It’s still in the editing stage, an m/m short story about an actor who is being abducted by a fan who keeps seeing the actor as the character he plays in a series, instead of the real person he really is.

I would really love it if anyone wants to connect with me. The following are some places readers can find me.
Blog
Goodreads
Facebook
Twitter

More than 600 miles separated Drew and Zach, but on Halloween, Zach came to Drew and left again, just like that.

Separated by more than 600 miles, Zach and Drew were forced to keep in touch through phone, email, and Skype. As Drew showered for one of their "dates," he wasn't alone. Imagine his surprise when he discovers Zach’s car crashed, leaving him in a coma. Who was it that joined him in the shower, then? Would he have a chance to be with Zach again?


"Zach..." He closed his eyes, snaked his arms up, and wrapped them around Zach's neck. Zach nuzzled into Drew's armpit, kissed his nipple, and bit it lightly, eliciting a deep growl from Drew's throat.
"Christ, you're so hot. I want you so much." Zach's hand slithered down and took Drew's length and slowly stroked it up and down. Drew threw his head back to rest on Zach's shoulder, moaning and gasping as the orgasm built in his cock. His hands ran through Zach's hair, grasping it, taking Zach's face down to his own, seeking out Zach's lips and kissing them.
"I want you too," Drew said, breathing into Zach's mouth. "I want you inside me. Please." He took Zach's hands, sniffing, licking them, tasting himself there, and he got harder. Zach kissed him more intensely, their tongues dueling inside as if wanting to melt them into one. Zach pressed his hard-on against Drew, who mewled wantonly and began to rub himself shamelessly. "Yes, oh yes. Like that, Zach."
To Drew's dismay, though, Zach seemed to fade until what was holding Drew was merely a wet trail of shadows. A whisper breathed in Drew's ear, "Later." Zach was gone.


Iyana lives in Jakarta, a city famous for its traffic jams, a lot of cars and motorcycles, and people selling stuff on the roads. You can spend two hours on the road going to a place you can reach in half an hour in a normal situation. Thanks to the traffic jams, though, Iyana can come up with a lot of stories, mostly shorties, as she prefers to spend the time during her trips writing into her cell phone rather than sleeping.
Another thing Iyana loves is kitties. Right now she has five of them. Their names are Larva, Nyil, Cil, Mermood, and Horus. When she doesn't write, she plays with them, or they would play with her when she writes.