Surviving the Storm: A Guest Post by Kate Kadence 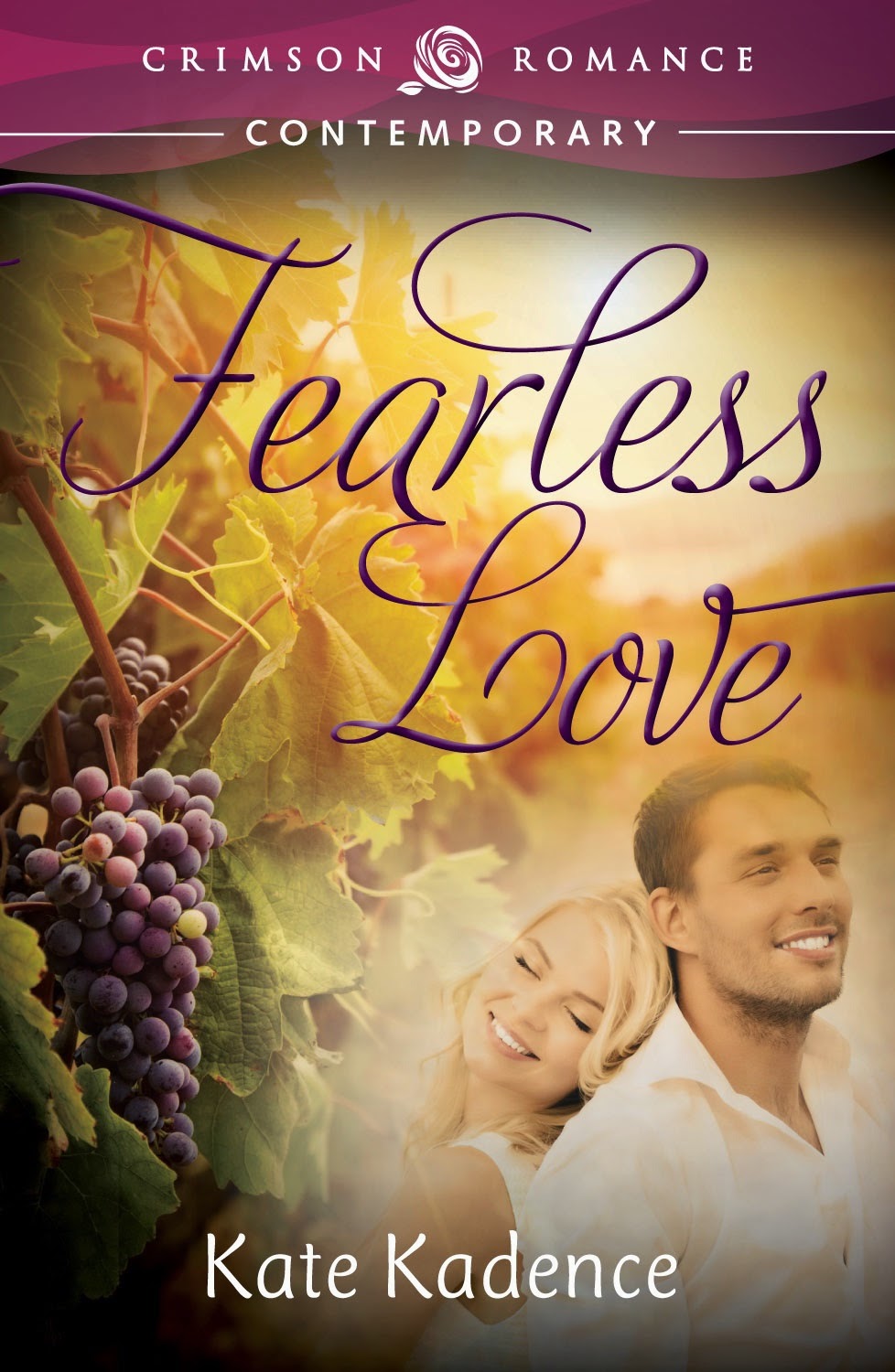 Thank you Romance Reviews Today for having me on your blog! I’m so happy to be here with my fellow book lovers. My debut novel, Fearless Love, just came out on June 16th. It’s about independent photographer, Madison Carmichael, who locks heads with jet-setting playboy, Jake Colt, when he ruins the biggest photo shoot of her career and also happens to be the new owner of her parent's winery. Madison has all kinds of adventurous dates with Jake that challenge her dislike of the uncontrollable aspect of nature; something I can relate to after my first sea voyage with my husband’s family, complete with the fierce tail end of a storm.

I adore being out on the water but it doesn’t always return the favor so I probably should have been a tad more hesitant when my then boyfriend invited me on an overnight trip with his dad and a couple of his friends on his father’s boat. I was so thrilled for the invitation, though, that I didn’t think twice about saying yes. Until we were ramming into choppy waves and I was trying my best to keep from throwing up over the side of the boat in front of my boyfriend’s dad, who I had just met for the first time ever and was trying to impress.

By the time we dropped anchor, I was desperate for land. After a quick excursion on the island, powerful winds, which in my memory are classified as gale force, started raging around us as we tried to make our way back to the boat. At that point, our friends were going faster in their kayaks with their paddles out of the water than we were in a small motor raft as we struggled to help them.

Somehow, we managed to make it to the boat, which by then was falling apart with zippered plastic windows tearing free and loose items threatening to blow off into the ocean. In a scene of utter chaos, with my husband and his father the only ones unruffled by the dismantling vessel, we all worked to stow everything we could below deck and ‘batten down the hatches’ with bungee cords no less. In a moment I will never live down, and which was actually included in my father-in-law’s wedding toast, I sprawled out, belly down and spread eagle, on a surfboard to keep it from flying off. Yes, it was really in danger of doing so … at least I was certain it was at the time.

With everything tied down, we hunkered in the for the night and my husband’s father started making dinner while the rest of us tried to relax. But that was hard to do with a spotlight shining on us from the largest, most expensive yacht in the area warning us we had broken anchor and were drifting toward them. In the pitch dark, the guys were on deck trying to bring up the anchor so we could move to a nearby cove.

When we finally sat down to eat, my husband and his father chatted and relished the food like nothing had happened while the rest of us stared at each other with little ticks in our eyes wondering if anything else could possibly go wrong. Bad question.

In the quiet of the morning, over a fresh cup of coffee when we thought it was all over and felt like true survivors, the carbon monoxide alarm went off. Perfect. We finished cooking breakfast on the BBQ on deck and spent the entire ride home outside. At least that provided us with the perfect view of a pod of dolphins playing at the bow of the boat as if they knew their peaceful presence was sorely needed to remind all of us why we even like the water.

The minute the boat pulled into the harbor, our friends made a break for it. They haven’t been out on a boat with us since then. Huh, I wonder why?

As my husband and father-in-law set up lunch on the torn apart boat, I realized that this family who maintained such serenity in the storm was the exact family I wanted to call home. Because sometimes those uncontrollable moments become the best stories you could ever share.

What about you? I’d love to hear all about everyone’s wild and crazy date stories. Don’t forget to check out Madison and Jake’s adventures in Fearless Love on Amazon, Barnes and Noble, and iTunes.

Blurb: Madison Carmichael’s carefully controlled world has just spun off its axis. Not only has jet-setting playboy and investor Jake Colt landed his helicopter in the middle of the biggest photo shoot of her career, she is shocked to discover he purchased her parents’ financially troubled winery.

Madison refuses to let this interloper take what belongs to her family, no matter what passions he stirs in her heart. She’ll do anything to get him out of Serenity Creek and her family’s business, even if it means striking a deal that goes against every grain in her body with the arrogant man himself.

Jake has no interest in handling the Carmichael winery acquisition, but he has little choice considering the business agreement he made with his father. As with all of his father’s dealings, there are strings attached, and Jake is determined to cut them at all costs.

If he is going to spend time in the backwards town that reminds him too much of the one that betrayed him all to turn some two bit winery around, he is going to do it on his own terms, which includes encouraging the feisty woman who has captured his attention to break out of her shell and live a little.

But when two opposing forces clash, sparks are bound to fly . . .

Excerpt:
“Coffee and breakfast as promised.” She held out a cup to him and shook the bag in her hand.
Jake traded one backpack for the cup. “Thank you.”
She held the backpack at arm’s length. “What is in here and why do I need it?”
“It’s a surprise.” He took a long sip of coffee.
“I don’t like surprises.”
“I know. It’s something I’m hoping to change.”
How did she respond to such a statement?
He hitched his backpack over his shoulder, already walking to the door. “Come on, we can eat on the way.”
She sighed, having no choice but to follow him and whatever crazy events he had arranged.
She settled in next to him in his rented Range Rover. Of course, he would drive such a car. She ran her hand along the buttery smooth, gray leather seat. A far cry from the battered, brown upholstery in her own car.
He drove them out to the main highway while nibbling on one of the delectable croissants.
She grabbed a piece of her own and glanced over her shoulder at the backseat where a picnic basket rested on the floor.
“What’s that?” she asked, pointing to the container.
He dismissed her question with a wave of his hand. “That’s for later.”
No way could he be this irritating by accident. “Are you seriously not going to tell me anything about where you’re taking me and what we’re doing?”
“Yes.”
His simple answer annoyed her more than a long explanation of his reasoning.
She hated not being in control. How had she lost it so fast? She had to gain direction of the situation again and get things moving toward where she wanted them.
“Are buying wineries and aggravating women your main goals in life or do you have other interests?”
He chuckled. “Believe it or not, I’ve never worked with a winery before and most women find me anything but aggravating. Or so I’ve been told.”
“They’ve lied.”
He glanced over at her. “Really?
No. She knew perfectly well what most women must say about him. But she was trying hard not to be one of them.

Kate Kadence lives on the California Coast where she loves to write and enjoy beautiful sunsets with her family. Find out more at www.KateKadence.com.

Thank you Romance Reviews Today for allowing me to be a guest on your blog!