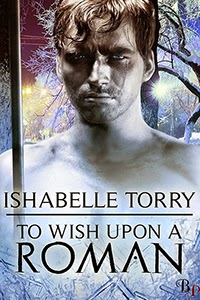 My newest release, To Wish Upon a Roman, features a cursed Roman general and the modern day descendant of the witch responsible for the entrapment. After seventeen hundred years all Hadrian wants is his freedom. At least until he meets Lucy-perhaps enchantment isn't so bad after all?


The most surprising thing I learned was about naming. The cursing witch's name was originally Esmeralda. However, after a fact check I learned that Esmeralda was a name popularized by The Hunchback of Notre Dame in the 17th century. So that meant my witch required a name change to Genevieve. Which was awesome anyway because it was my grandmother's name.


3. Do you have any interesting quirks or rituals?

I don't really have any rituals, per se. However, I cannot write with actual music playing. The television is fine though! However, I do use music to motivate me, just not simultaneously with writing.

Ahh, another shout out to Virginia Henley and Madeline Baker for introducing me into the wonderful world of romance. Pre-romance, R.L Stine topped my list of favorite authors as a child. But it was my friends, family, and even several teachers, that urged me in the direction to write. Without their encouragement, I may have never been anything more than a closet writer, never seeking publication.

Awesome! They couldn't be more excited for me. Of course, now that means I am the official proofreader for all English based school assignments!


6. Besides writing, what other interests do you have?

Aside from reading and writing, I must admit I am a Netflix junkie. I have a list of series I'm in the middle of checking off, and always looking for more!

Currently, I have a paranormal featuring an angel in the works, and am heavily considering a series. But I can't say anymore…it's a surprise!

I currently maintain a Facebook page, as well as Twitter. I welcome readers to drop by and give me a like, as well as encourage any comments! I love me some comments!

When Lucy received the locket from the estate of her aunt, it came with a warning to never speak his name...but where's the fun in that?

Trapped for seventeen hundred years, General Hadrian Marias awaits his release from a crystal prison and a chance to find the reincarnated soul of his wife, Lucia. Instead, upon being summoned into the modern world, he finds Lucy—the descendant of Genevieve, the Celtic witch responsible for his entrapment. Everything he knows about Lucy stems from his experience with Genevieve, but he soon discovers the only thing Lucy shares with her ancient ancestor is an uncanny resemblance. He quickly finds himself drawn to the feisty vixen. But can he ever forgive himself for losing Lucia of the past, and move forward with Lucy?

Lucy Brady was devastated to receive word of her aunt's death. Her only joy, a family heirloom passed down from generation to generation. Inside the golden locket hides a crystal containing the essence of Hadrian. Even though warned to never say his name, she chalks it up to superstition and inadvertently summons an ancient Roman general who demands his freedom from her tyrannical bloodline. Deeming the general's appearance a prank, Lucy agrees to grant his freedom—in lieu of sex for a fortnight. Will the next fortnight of passion be enough to keep Hadrian at Lucy's side? Or will he choose absolute freedom from her bloodline?

Hadrian was infatuated by the witch's sudden change. Her demeanor had gone from a scared rabbit to a cunning wolf as she slowly advanced in his direction. She looked ready to pounce.
Damn the gods.
He shook his head in frustration, swearing at his lack-wit brain. He assumed the dark woman with the strange clothing and heavy face paint had been Genevieve's kin, but instead the innocent angel before him was the vile sorceress's descendant. How could he have missed it? She even had the same violet pigment as Genevieve. He now knew for certain this pale beauty was his newest captor. "Release me."
"You never answered me," she purred prettily, taking slow deliberate steps toward him and emphasizing the sway of her hips.
Hadrian grunted. The witch recognized her powers already. She was another generation warned in advance; already knowing he couldn't harm her physically as long as she controlled him.
Damn her smugness! He took a step back with each forward step she took. "Stay back, witch."
He didn't mean it. He felt himself harden with her approach. He hated her. Nay, he didn't, but he should. Something about her perplexed him. She has her ancestor's looks. Genevieve. His last step back was blocked by the loveseat. He thought to sidestep the smiling vixen, but a squared table blocked his path.
Curse her and her second sight! She has me purposely trapped!
The witch appeared to enjoy his uneasiness as she played cat and mouse. She obviously delighted in being the predator, moving in just the right way to keep him cornered. Her siren voice with its otherworldly quality beckoned him as she spoke. Aye, she was just as much the devil's mistress as Genevieve.
"I ask you one more time, Hadrian Marias: Why should I release you?"
His pulse pounded in his ears. "It would be the honorable thing to do, milady. Seeing your family has held me prisoner for almost two millennia."
"I see." She dared to wink. "What's in it for me?"
His paranoia threatened his temper. He felt the sudden need to hide from this enchantress. He would not make the same mistake again and trust a witch. No matter how beautiful she was or innocent she appeared, she was evil. Genevieve's blood ran through her veins. "What do you want?" He finally managed to ask, hoping she didn't hear the apprehension in his tone.
She threw her sultry head back and her laughter floated on the air and teased his defenses.
Devil's Mistress...
She smirked. "In fourteen days, I will release you, but only if you become my sex slave and guarantee my satisfaction."

Ishabelle Torry is a full time mother, wife and student. She enjoys time with her family, and their plethora of pets on the farm. In her spare time, she is constantly dreaming of characters and the worlds they are found in. Occasionally, Ishabelle has been known to argue with her characters and bribe them with cookies when they have a wayward moment.