Review and Giveaway: WHEN ME MET by Susan Mallery 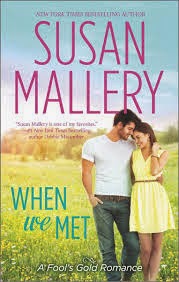 The small town of Fool’s Gold is not a place Taryn Crawford would have expected herself to live, but when her three copartners in a public relations company voted to move there, she had no choice. It still doesn’t stop her from wearing her designer clothing and high heeled shoes, though she does seem out of place. Taryn is aware of local resident Angel Whittaker, but her interest is definitely piqued one day when he informs her that “we both know where this is going.” Angel is a tough military vet and seems like the opposite of anyone Taryn should be attracted to, but there’s no denying opposites do attract. Despite Angel’s rough and tough exterior, he’s pretty darn good at wooing Taryn, or at least snagging her attention. But will it lead to anything more?

Bodyguard trainer Angel is interested in Taryn, yet he doesn’t know what is going to happen other than he can’t wait to be around her and hopes things go from there. He hasn’t forgotten losing his wife and child in a car accident, so he’s not looking for love and marriage, just someone who can excite him as he hasn’t been in the past few years. Meanwhile, Angel inadvertently agrees to lead a pack of “acorns,” a group of little girls much like girl scouts. How can a man who doesn’t know how to treat little girls be expected to help these children? He looks to Taryn to help him, which brings them closer together…and to so much more.

Taryn is a city loving girl who feels a little out of place in tiny town Fool’s Gold. But everyone has welcomed her and she makes do, including new friends Dellina, Noelle, Isabel, and of course, her coworker Larissa. Hulky Angel sends tingles up Taryn’s body, and while he does a great job of wooing her, he fails at completing the act—at first. It’s like he doesn’t know how to get around the bases. She knows he’s suffered a great loss, but is he too damaged to move on with his life? Meanwhile, Taryn and Angel get to know a fatherless little girl and her mother. Taryn wants to help the other woman out, but will she accept?

Angel enjoys his job and pursuing Taryn, but feels as if he hasn’t much to offer her. He feels lost trying to connect with little girls, but with her seemingly good knack at communicating on their level, Angel soon feels protective of his acorns. His interaction with the kids is cute and funny, and readers will surely have smiles on their faces. It also doesn’t take long before the sensual heat between Angel and Taryn is soaring as they finally act upon the lust that brought them together.

WHEN WE MET is part of the Fool’s Gold series, and readers will catch glimpses of several of the characters including Isabel, Noelle, and Patience, but to list them all would take too much time. Suffice to say, if you’ve read the twelve prior books in the series, then you know exactly who is who. However, if you haven’t, or got behind like I did, you could read WHEN WE MET without feeling lost.

Susan Mallery knows how to add heart to a romance and continues that with WHEN WE MET. Taryn might enjoy wearing her designer clothes, but deep down she is as practical and as vulnerable as they come. Will she lose her heart to Angel? Can he get past the tragedy from his past? Discover the answers for yourself in the heartwarming and cute WHEN WE MET.

Susan Mallery is a great author. Thanks for the chance to win!

Have enjoyed Susan's books for years. Thanks for telling us about her latest, and thanks for the chance to win it!

I enjoy Susan's Fool's Gold books. It's nice to see Angel getting his HEA. Thanks for the giveaway.

I'm really looking forward to reading another Fool's Gold book. Susan is such a fantastic author,I just adore her characters. Thanks for the giveaway, Patti!

I love Susan's books and this looks like another winner! Thanks for the chance to win it.

I love Susan's books and this looks like another winner! Thanks for the chance to win it.

Sure do. Love Susan's books.
Patoct

I'm behind on the Fool's Gold series I recently finished Ethan & Liz's story, ALMOST PERFECT and Nevada & Tucker's story, ONLY HIS. I enjoyed both of them. I must read the other books in this series.

I'd love to read Taryn & Angel's story, WHEN WE MET! Both characters are adapting to a lot of changes in their lives.

I love this series, I can't wait to catch up to the newest Fool's Gold. This is definitely one of the "can't miss" series for me!

Oh I love Susan Mallery! Haven't tried the series yet but would love the chance.