Thank you for having me today. If you make a comment, you'll be entered in a drawing for an e-Book from my romantic suspense series Tour Director Extraordinaire. Here's a question for you to think about.
If you were able to travel in time, where would you go and what 3 things would you take with you?

1.  Tell us about your newest release.
A Timeless Melody is a time travel romance (novella length) about a university student in 2500 AD at the University of Red Gulch, the Mineral Capital of the Solar System. A history student completing her master's thesis on the founder of Red Gulch, she illicitly uses the university time machine to go back to 1979 to research, first hand, the founder Brandon O'Donnell. There, she falls love with the topic of her thesis and plots to return to his time to spend the rest of her life with him.
But she quickly discovers, the task isn't that simple. To achieve her goal, she'll have to a secret that could destroy her plans.
2.  What was one of the most surprising things you learned in creating your story?
I initially wrote this as a short story, in the hero's first person view point. My editor asked that I consider putting it in 3rd person, giving both the hero and the heroine's view points. I agreed to try it and found a whole new dimension to the story. Things that the hero didn't know had to be addressed in the heroine's view point, and a lot of background and emotions had to be added. The original short story was about 10,000 words, but to adequately address it in third person, I had to add another 20,000 words.
In the future, even when I choose to write in first person, I will go through a different process to identify the other character's emotions, goals, and motivations, even if I'm not writing in that character's view point.
3.  Do you have any interesting quirks or rituals?
I don't think so. I used to, but 37 years working in urban planning and architecture got them out of my system. I'm pretty "vanilla" in my old age.
4.  What authors or friends influenced you in helping you become a writer?
My mother was a librarian, so I grew up with lots of books around. I think her love of reading rubbed off on me. In high school, I had an English teacher who encouraged me to write, but it never occurred to me that it could be a career.
Getting into the Palisades Critique Group, lead by Sid Stebel (USC) was the most influential step toward really learning to write a novel. I consider Sid my mentor, and all the rest of the group are "my family", although I don't see them often anymore. Joining RWA was the other most influential step in my writing career.
5.  What does your family think about your career as a published author?
Although they are very supportive and encouraging, I don't believe they take it seriously. My daughter is very proud of me, but for my husband and two sons, it's something for me to do now that I'm retired from my "real" career. [I think they're secretly proud of me, but they would never read anything I wrote...and I wouldn't want them to.]
6.  Besides writing, what other interests do you have?
I quilt, and I read. I used to play the piano and ride motorcycles, which I don't do anymore. I am also a member of the American Planning Association and the California Planning Roundtable, serve on the vestry of my church, and am a member of the charity Child Help USA.
7.  Can you tell us what is coming up next for you?
My next new project, after I finish editing an already-completed murder mystery, will be a historical WWII novel about the incarceration of the Japanese-Americans in the US. It's a shameful piece of our American history that I feel strongly about, and I have been wanting to attempt a mainstream novel about the topic for years.
In addition to that, I have far more ideas than I have time to write, so many of them may never see the light of day.
8.  How can readers connect with you online?
I love to hear from my readers. I can be reached through any of the following:
e-mail:                   punkyc@pacbell.net
Website/blog:       http://www.rannsiracusa.com/
Facebook:            http://www.facebook.com/pages/R-Ann-Siracusa/140519942680667
http://www.facebook.com/profile.php?id=1358230809&ref=ts
Twitter:                https://twitter.com/#!/AnnSiracusa
Google Circles:    https://plus.google.com/105467292422978603982/posts
□
A TIMELESS MELODY
by R. Ann Siracusa 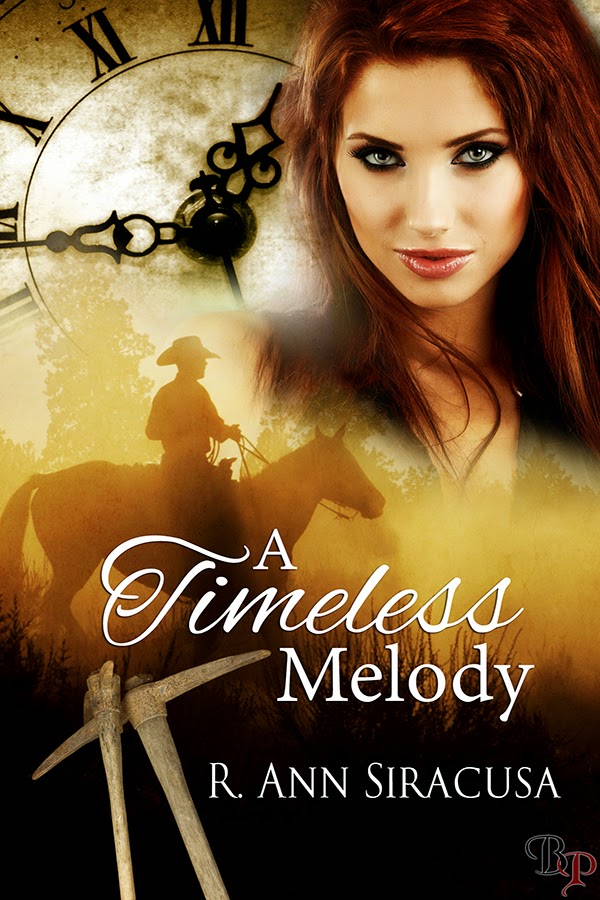 BLURB
Melody appeared out of nowhere, blown into of Red Gulch, a decaying mining town in the Mojave desert, on the crest of a desert breeze like the ever-present tumbleweeds that filled the empty streets in the blink of an eye.  Except everyone knew where tumbleweeds came from.
Brandon O’Donnell never figured out where Melody came from, but she captured his heart with her flaming red hair, hypnotic light-grey eyes, and intense but distant way of speaking...as though, Brandon had thought for years, she knew a lot more than she let on.
What will happen to their love when Brandon find out the secret Melody has been hiding from him all these years?
EXCERPT
Phantom fingers trailed along Brandon's back. The short hairs at the nape of his neck bristled, and a shiver slithered down his spine like a cube of ice. Startled, he turned and scanned the empty booths a second time.
"Well, I'll be darned." There, in the furthest cubicle, a woman's small frame hugged one corner, almost invisible, except her flame-red hair stood out against the muddy color of her surroundings. How'd I miss seeing her?
From across the room, her steady gaze reeled him in, a fish dangling helplessly on a line. He slid off the stool, picked up the mug, and walked to her table, almost unaware of moving.
Close, she appeared to be a few years younger than he—twentyish maybe—with delicate features and a near-translucent complexion that resembled smoky glass with light behind it. As he approached, her hypnotic light gray eyes seemed to grow bigger and bigger until they swallowed him. His stomach muscles tightened with growing awareness. His head spun as though he'd been sucker punched. He fought the sensation of wavering on a high precipice on the verge of falling into a bottomless abyss.
Without waiting for an invitation, he sat opposite her. "Hello. I'm Brandon. Brandon O'Donnell."
Her slight body stiffened, and she clenched her hands together. She gazed at him, her wide gray eyes seeming to grow even larger, as though he'd taken her totally by surprise, which didn't make any sense. She'd been staring at him all the way across the café.
The girl rolled her shoulders, apparently dispelling tension, and smiled shyly. Then, she slid out of the corner of the booth. "Ah, hello...Brandon. I'm...Melody."
Not Melody Somebody-or-other...just Melody. And that seemed enough. The way she spoke his name mesmerized him. He liked the way her silky red hair framed her sweet face and the floral-scented fragrance she wore. He liked the whole package.
AUTHOR BIO

R. Ann Siracusa is a California girl who earned her Bachelor of Architecture degree from UC Berkeley, then went immediately to Rome, Italy. On her first day there, she met an Italian policeman at the Fountain of Love, and the rest is history. Instead of a degree from the University of Rome, she got a husband, and they've been married going on fifty years. In Rome, she worked for as an architect and planner for a land development company for several years until she and her husband moved to the US.
Now retired, she combines her passions—world travel and writing—into novels which transport readers to exotic settings, immerse them in romance, intrigue, and foreign cultures, and make them laugh. Her first work (a mafia thriller) was published in 2008. Breathless Press has published a five-book romantic suspense series, three short stories, a sci fi romance, and a time travel novella.
She loves to hear from her readers
Website:             http://www.rannsiracusa.com/blog
Facebook:           http://www.facebook.com/ann.siracusa?ref=ts
Twitter:              https://twitter.com/AnnSiracusa
Google Circles:  https://plus.google.com/105467292422978603982/posts
Good Reads:      http://www.goodreads.com/author/show/2993012.R_Ann_Siracusa
References
http://en.wikipedia.org/wiki/Setting_%28narrative%29
http://www.rachellegardner.com/2012/06/using-setting-as-a-character-a-tip-for-novelists/
http://www.novelrocket.com/2011/10/make-your-setting-character-by-susan.html
http://www.julieleto.com/articles/where-am-i-the-importance-of-setting-to-your-romance-novel/
http://www.scribophile.com/blog/importance-of-setting-in-a-novel/
http://leaguewriters.blogspot.com/2010/05/making-of-world.html
http://blog.nathanbransford.com/2010/05/what-makes-great-setting.html
http://www.saint-petersburg.com/photo/index.asp\

I loved learning more about you! It's wonderful that your daughter reads the books and that your son and hubby are secretly supportive!