So what is a romance?
That's a bit like saying how long is a piece of string.
What is a m/m romance?
A romance. That same piece of string.
Because to me, a romance is a romance is a romance. It doesn't really matter who it is between. Men, women, both, either, several, whatever works.
Love is something that hits people without any rhyme or reason. And I don't put a tag onto it.
When my muse (translation-those voices that my characters bombard me with and shout loudly until I say okay, I'll write your story next) hits me, I know that those characters are ready to have their story told. Sometimes they are of the same sex. It doesn't matter, I'm still writing a romance. Their love story, with all its ups and down misunderstandings, rows, make-ups and hopefully hot sex and happy ever afters.
No, that's not quite right, it does matter. But only in that I get all the bits and pieces in the right places (if you get my drift).
Let's face it, whoever we are, or whoever we write about, some of the angst is the same, even if we have to translate it a bit differently. Does my bum look big in this? (does my belly stick out)? Is my dick big enough/too big/thin/ wide. (are my boobs too big/small/saggy)?
Will he/she like what they see/I do?
Will we fit?
All questions that can be something anyone worries about. 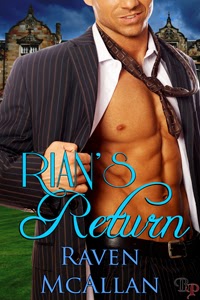 So when I write my m/m stories, I try to address those questions and write a love story between two people.
Do I succeed? I hope so. One thing that did give me heart though, was when a reviewer said that they were surprised I was a woman because I'd written the man's perspective, and understood his worries and insecurities so well.
That to me said it all.
Happy reading,
Love R x
Buy Link for Rian's Return

***Link to Rafflecopter for Giveaway:***
http://www.rafflecopter.com/rafl/display/05de020/


Raven lives in Scotland, along with her husband and their two cats—their children having flown the nest—surrounded by beautiful scenery, which inspires a lot of the settings in her books. She is used to sharing her life with the occasional deer, red squirrel, and lost tourist, to say nothing of the scourge of Scotland—the midge.
Her very understanding, and long-suffering DH, is used to his questions unanswered, the dust bunnies greeting him as he walks through the door, and rescuing burned offerings from the Aga. (And passing her a glass of wine as she types furiously.)

Four men or two couples. Sam, Rian, Ed, and Ali. Could they work it all out?

Sam knew it was time to move on. Ed seemed the very person to help him.
Would they manage to overcome the obstacle in their way? Namely Rian.

Rian is devastated. Just because he'd sent a Dear John email—or should that be a Dear Sam—did Sam have to accept it?

Ali couldn't believe his eyes when he saw the one guy he'd lusted after all those years earlier, walking along the street in the rain. Could he persuade Rian it was time to move on and get his reward for doing the right thing?

Sam watched as Ed stood frowning, looking at the washing machine.
"Can you run this empty?" Ed asked him.
"I guess so, that's how you clean it. Why?"
Ed didn't answer directly. "Just come over here a sec, will you. Nice, okay, my turn now? Yeah?" Sam nodded. "Great. So lean your front against the machine then—oh, yeah. Get that lovely cock right up against it."
Sam did as he was told, feeling the cold metal against his body, as the sensation of his robe falling to the floor left him exposed. Cool air feathered over his body. There was a shuddering motion as the machine began its cycle, sending pulsating sensations into his penis. His cock swelled, and hardened.
"Don't move," Ed warned. "It's going to get even better now. Trust me."
The machine rubbed and stimulated Sam as his lover opened and stretched his ass. The gel's cool sensation had him shuddering, and he pushed himself away from the tremors and into Ed's hands. He was firmly pushed back toward the metal, as pressure was applied to his behind. He could feel himself being stretched, felt Ed gently push his penis into his tight opening. Gradually, like a flower in bud, he felt himself opening ever wider as Ed moved deeper. With one fast push, Ed was in.
"Jes-us." He felt himself tighten, involuntarily trying to push Ed out, before he relaxed, rode with the pain and it became pleasure. He moved, pulled Ed in further, begged, sought, and asked for more.