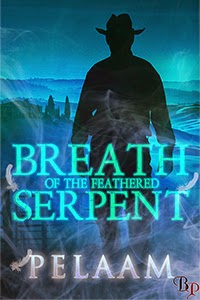 Breath of the Feathered Serpent is a cowboy, action, steampunk m/m romance. A mix of Federal Marshals, seasoned ranchers, Aztec warriors, and a mysterious artifact, with a smattering of steampunk.

Finding out more about the Aztecs, such as their love of poetry, but gory blood sacrifices. Their use of cosmetics, and their use of steam baths

When I first sit down to write, I like to have a favourite DVD playing in the background, as I can’t work in silence and music is too distracting. I also like to have a cup of New Zealand breakfast tea at hand. That may become a glass of chilled white or rose wine later in the evening.

My husband was and is my biggest influence, He couldn’t understood why I wrote, but didn’t post what I’d written anywhere. With his encouragement I posted my free reads on Literotica. I won Best Halloween Story with “A Call from the Heart” and Best Gay Male Author for “Opposites Attract”. I was approached to publish, and haven’t looked back.

Those I’m close to and know are all very excited. My cousins in the US are very supportive, too.

I’m a foodie and a wine buff. I love cooking, reading about cooking which includes its history and evolution as well as recipes, and eating out., of course.  I’m a member of a wine club, soon to be committee member. I also love to read, and sometimes paint.

I have several WIPs I’m working on, including fantasy, sci-fi and a YA. Fantasy/paranormal/sci-fi are my favourite genres, although I’ve developed an interest for steampunk. I’m working towards my next NaNo attempt with a steampunk time-travel theme. I’m particularly excited about this WIP.

I’m on Facebook. If people want to be friends, check out my wall, and contact me there. https://www.facebook.com/pamela.pelaamone


Adam's mission is to investigate the theft of an Aztec statue, but he falls for a suspect. Is Elijah innocent or a deadly thief?
When the theft of an Aztec statue threatens to destabilize the provinces on the Texas border, Federal Marshals Adam and Madison are called in to go undercover and investigate. The last thing Adam expects is to be attracted to a young man from one of the ranches they are investigating. With time running out, Adam must face his growing love for Elijah while keeping his true identity a secret and locating the Breath of the Feathered Serpent. But he and Madison are facing a thief as deadly as he is elusive and a statue with powers of its own.

Adam smirked and then looked at the other rider who'd dismounted. To Adam's surprise, it wasn't another woman as he'd assumed. The young man had the same lean build and auburn hair as his sister, but as he came closer, the masculine angles of his face were clearly visible, as were the lush, full lips that made Adam lick his own, suddenly dry ones.
He stared at the youth. In his time, Adam had bedded, or been bedded by, more men than he cared to count, let alone remember. He'd become jaded, and he knew it. But there was just something about this man that piqued his interest. Adam was quite certain that in a month, a year, or even a decade from now, if he lived that long, he would remember the plaid-shirted, beautiful young man.
The stranger came to stand by his sister. "That's Charlie. Or it was." He looked from Madison to Adam and back again. "You fellers find him?"
"That's right, Mister..." Madison waited for a name.
"Elijah. I'm Elijah."
"Did he discuss coming here with you?" Ellen asked, looking at Elijah. "I saw the two of you talking together."
"Nope. Not with me. He said he wanted to have a word with Uncle and see you about something. He never mentioned anything about riding out here."
Adam pursed his lips. It seemed to him that a whole heap of attention was focused on one dead cowpoke. But then again, not many ranch hands ended up dead from allegedly bad water on a supposedly deserted ranch. More surprisingly was the disappointment he felt realizing that Elijah might have been the last man to see Charlie alive. That made him a potential suspect.
"Well if it's all the same to you, Sheriff, Adam and me will be getting along and head into town. Maybe we'll see you tomorrow, Miss Ellen. We're short of funds right now and hoping to find some ranch work." Madison tipped his hat to Ellen, who remained stone-faced.
"Given we've lost Charlie, we could do with some help, Sis," Elijah said.
"Maybe. But the final say will be Uncle's. Don't forget that," Ellen said. "Let's go. We need to let him know what's happened. If you fellers are thinking of calling 'round, make it before noon. Uncle likes to take a nap in the afternoon, and we never disturb him when he's resting. I take it you'll take care of the remains, Sheriff? Or maybe you will, Mr. Carter. Another one of your charitable acts." Not waiting for a reply, Ellen headed toward her horse with Elijah a step behind.
Walking towards their own horses, Adam watched the twins from the corner of his eye.
"She's a fiery one," Madison muttered. "Must be the red hair. Pretty enough though."
"Yes, he was." Adam realized his slip too late to censure it.

Pelaam lives in clean, green New Zealand.  She is a published author of gay male romance and erotica across time and space. When not writing, she indulges in her other passions as a foodie and wine buff.
She can be found on Facebook, https://www.facebook.com/pamela.pelaamone and a full list of her published works are on Lazy Beagle Entertainment, http://www.lazybeagleentertainment.com.