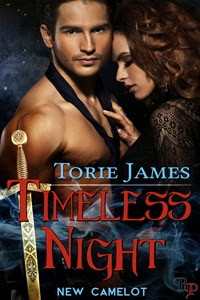 “Timeless Night” was my debut novel, originally released September 20th by the fab people at Breathless Press in Ebook form. And now it’s about to become available in PRINT! I am so excited! It’s the first book in my New Camelot series. I’ve taken the Arthurian Legends and given them my own spin, dragged them into the light of modern day Los Angeles. Timeless Night focuses on Alexander Lakeland (the Knight formerly known as Lancelot. Yes, that Lancelot!), an immortal Light Guardian, sworn to the service of Merlyn and the sassy, lively blunt Sabrina Foxworth. She isn’t what she seems either!

Buy a copy of Timeless Night.

That everything I thought I knew about Camelot, Arthur, Merlyn and the others was simply a smoke screen for what really happened. I started out in control but my characters quickly took over. It was a battle of wills. I lost.

I do! I have to shut out the world when I’m writing. So on go the earphones, boom goes the music. If I manage to meet my daily goal, no matter what it is, I reward myself with an ice cold Dr. Pepper and chocolate.

Johanna Lindsey is my all-time favorite romance writer. I read one of her books when I was scaling the crest of puberty and she ruined me for all future fictional boyfriends by setting the bar pretty high. Anne Rice, Sherrilyn Kenyon, Charlaine Harris round it out. And I’m blessed to have so many wonderful friends who have no idea how much of them resides in my characters.

Extremely happy and supportive. I spent the majority of my life saying “I’m going to do this”, followed up by heavily applied procrastination and stunning laziness. Which sounds far better than fear. Which is what stopped me before I’d even given myself a chance to start.

Reading junkie, as well as dabbling in photo shop. Bowling, which I’m pretty good at. And role playing on line. No shame in my game. I’m also trying to help my younger sister find her footing in the writing world.

So much! Gah! “My Bloody Valentine”, a dark anthology from Breathless Press just dropped on Feb. 14th. I was so thrilled to have a short story in that! I’m working on another series called The Cloie Chronicles and it’s based on Clotho, one of the Greek Fates of mythology. I’ve another idea about this character called Avan Noxturna, the devil’s only daughter. I’d like to eventually write a book about Henry VIII and his crew. March 21st, 2014 sees “Timeless Desire, Book Two of New Camelot” published and I’ve already begun working on Book 3!

I can always be found around at: FB: https://www.facebook.com/WriterGurl216

Thank you so much for having me today! Much love, magic and success to everyone!

If you could live forever, what would you choose to live for? I chose love...
A silent guardian, Alexander has walked the corridors of time in pursuit of an end to a haunting prophecy. Sabrina has lived a life surrounded by modern magic, unaware that the greatest and deadliest of powers reside within her own soul. If it only takes the light of love to ignite the stars, what of the decadent seduction of darkness? All roads don’t lead home and some myths only grow into legend.

"If you really want to read a book that hasn't been written yet, then you must write it" –Toni Morrison

Torie James has loved reading since she was old enough to hold a book in her lap. While her friends were out playing, she was generally curled up nearby, falling down rabbit holes, catching second stars to the right, and stepping through wardrobes into mysterious lands and countless adventures. When those stories ended, she made up her own and kept going. This later on translated into a strong passion for writing that has helped her keep her feet on the ground while her head stayed firmly in the clouds. Lover of Dr. Pepper, all things chocolate, and Duran Duran, her dreams finally became a reality recently, starting with the publication of co-authored poetry book titled Whispers in the Dark along with two contemporaries and friends, Ashley Nemer and Stacy Moran.
Timeless Night is her debut novel but she hopes to have many more forays into New Camelot where not everything remains myth.
Torie lives in Southern California with her family and a houseful of pets who rule the roost.

Thank you so much for having me today! It was a true honor!