Q & A with Brantwijn Serrah! 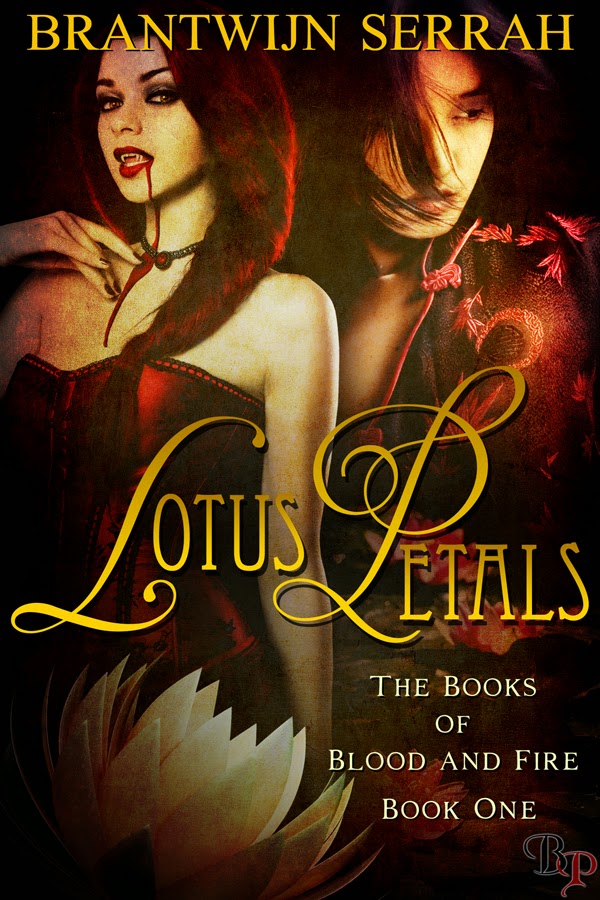 Lotus Petals is a story I've been hoping to share with readers for years. It's the story of a vampire's first love, in a world where demons are never meant to love, and humans are nothing but playthings and prey.  The characters—Rhiannon and Aijyn—have been with me more than a decade, and I'm so very, very excited to have them finally come to life for others, as well!

Well, there was a bit of a timing issue, when I looked into the history of Japan, the shogunate, the geisha, and the oiran.  First off, even though I'd been inspired by things I'd learned about geisha culture, I didn't want to make the mistake of casting geisha as prostitutes.  They're not, after all, and it’s a common misconception I didn't want to perpetuate. So looking into Japan's history I discovered the culture of the oiran, who were the forerunners to the geisha, and they were courtesans.  Looking at the rise and fall of the shogunate, I knew I wanted to place the novel in Edo-period Japan, but I originally set it in 1853, to be able to bring together all those elements—the shogunate, the geisha, and the oiran—at a time that would make sense. That wound up being a bit too late in the period to achieve some of the things I wanted. So I pulled it back 100 years, and then realized that one of the characters now had a background that didn't line up: originally she was meant to be a geisha who was turned into a vampire, but the novel's new timeline would mean she died before the geisha rose in society.  So I guess the surprising thing is that history hates me.

As for authors, I have to say that Jim Butcher, who writes The Dresden Files, is a huge influence and inspiration to me. I would say that even if all I knew of him was what I'd read through his books—they are terrific—but I actually had the pleasure of meeting him twice last year, and he just blew me away by being exceptionally open, friendly, and willing to talk shop. I thanked him for his books and told him what an inspiration to me they were, and he was very encouraging that I keep submitting my work, that it would be a success if I kept trying. So that was pretty amazing!

There's a sequel to Lotus Petals called Satin and Steel, which is written but needs a bit of pruning before I send it in to my editor for consideration.  I just sent off a new book, Goblin Fires, which is another lesbian love story, this one set in contemporary times and dealing with the faerie courts.  I'm hoping to hear back with good news on that one...

Three vampires rested in the room occupied by the captain of the daimyo's hunting party—all three of them awoke instantly when the little human oiran threw back the screen, shouting at them in furious Japanese. Without waiting for them to move, she strode boldly across the little space to come eye-to-eye with the captain himself as he struggled to come to his feet. At first they were so stunned by the mortal's appearance none of the three knew what to do: Kazuo, the captain, finally registered her shrill accusations.
"You would poison the daimyo's honored guest?" she shouted at him. "You would drug her with octopus venom and then humiliate her?"
Coming to his senses—they were slower in the daytime, vampires—Kazuo brought his hands down on her shoulders and lifted her off her feet. The sudden movement reminded her she had stepped into a tiger's den—she stiffened in his grasp and sucked in a fearful breath.
"Since when does the human come into my rooms uninvited?" he snarled. Fear shook her—she fully expected he would hurt her, and rightfully so—but she did not give off.
"Rhiannon Donovan has drunk the venom of the blue-ring octopus," she said, her voice quavering but still strong. "Your huntsmen use it to paralyze and kill—one of them drugged the human she hunted, and she swallowed it with his blood!"
"You dare charge my men with such a disgraceful act? And for a gaijin slut?"
"What's going on here?"
Kazuo looked up; his two servants followed his glance. In the doorway stood Nagisa, tall and elegant, wrapped in the gauzy silk of her azure sleeper's yukata—she, too, must have been roused by the sound of Aijyn's screams. Her cold eyes regarded each of them carefully.
"Aijyn," she said, the curiosity in her tone edged with danger. "What do you mean by disturbing the captain during his daytime rest?"
Kazuo shot a dangerous and warning glare at the human oiran, but Aijyn ignored it, desperate with fear.
"Nagisa-sama, the Councilwoman's noble emissary was betrayed last night during the hunt," she said quickly; she'd never imagined one day it might be Nagisa, of all people, to save her from the fangs of an angry vampire.
"Rhiannon drank the blood of a human poisoned with octopus venom, and now she lies in her rooms injured and sick. They took her hair, Nagisa-sama! They've shorn her like a...like a rag boy!"
Nagisa's poisonous eyes narrowed, her lips pressing into a thin line like the blade of a knife.
"Kazuo," she said the word like a stone dropping into an empty well. "Put Aijyn down."
Kazuo stared, incredulous, at the graceful tayu. When he did not immediately comply, Nagisa strode into the room and grabbed him by the throat.
"Why, Kazuo-san," she growled sweetly. "I had no idea you had already become so bored with immortality. Seventy-three years, if I recall, and already you wish for our master to release your soulless carcass into oblivion."
Amazingly, Kazuo slowly backed down, quietly letting Aijyn go while his eyes remained furiously on Nagisa. His servants watched with silent awe as Nagisa continued, never breaking her hold on the captain's neck.
"Aijyn-chan, you are surely aware you will suffer greatly, should this accusation prove false," the tayu said.
"I am quite sure of it, Nagisa-sama," Aijyn replied, bowing low. "I have heard the captain and his hunting party speak of the blow-darts they use to sting their human prey with the toxin. Kazuo-san has said the poison stings kin-born vampires as well; I am quite sure Rhiannon has swallowed it, and what reduced her to helplessness while her clothes were torn and her hair cut off."
"Please return to the rooms of our guest. Attend to her carefully—be sure these men did not force themselves on her body, as well. I will deal with Kazuo, and send word to the daimyo of this dishonorable conduct."
Aijyn felt cold all through her, and a dizzy giddiness swept through her mind. She had not even considered what she did—storming into one of the vampire's nests!—and now she felt weak in the stomach. How had she even survived it?
Nagisa's words echoed in her head: make sure the men had not forced themselves on Rhiannon's body. How could she not have considered it or checked for signs of it, to see if Rhiannon had also been raped by these monsters?
"Aijyn-chan," Nagisa said again. Shaken from her daze, she nodded. Then she slipped quickly out of the room and found herself running for Rhiannon.

Thank you so much for having me! I hope your readers enjoy the book!