Guest Blogger: Tawny Weber tells us about A SEAL's Salvation 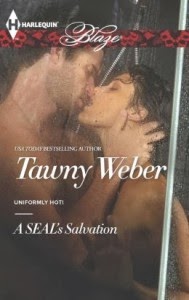 Subject: Navy SEAL Petty Officer Brody Lane
Current Status: On leave
Obstacle: The one girl who was off-limits...
Where Navy SEAL “Bad Ass” Brody Lane goes, trouble follows. Being run out of his hometown years ago for misbehaving with Genna Reilly—the sheriff’s daughter—was one thing. Now Brody is about to step into real danger. Not the suggestive letters he’s been exchanging with Genna, but the kind of trouble that can send a soldier home injured and broken inside...
Genna’s entire life has been orchestrated by her family.  The right job. The right friends. Enough! Brody’s return offers the promise of lust-filled pleasures. Of flesh teased and tasted. She’s not expecting to find a soldier with distant eyes who has secluded himself from the world. But this good girl knows exactly how to bring a bad boy back to life....
Uniformly Hot!  The Few. The Proud. The Sexy as Hell.

Excerpt:
Then she came to a letter with an APO postal cancellation. There was no name, nor an address, so there was no way to know who it was from.
But she did.
Hands shaking, Genna didn’t even notice dropping the rest of the mail on the counter as she held up the letter in both hands. Heart racing, she wet her lips, wanting to open it. Terrified to see what he’d said.
Ten years ago, Brody Lane had shown her an all-too-brief glimpse of awesome. In return, she’d landed him in the navy. She hadn’t known where he’d gone at first. Partly because she’d spent a month on in-house restriction, partly because nobody—not her parents, not anyone in town, nobody—was saying a word. It wasn’t until Joe had gotten out of the county lockup that he’d told her what Brody had done, had sacrificed. Because of her.
She stared at the letter, a little ragged and worn-looking against the soft pink of her manicure. She was the one who’d made this reconnection by writing him. She’d always wanted to. Always wished she’d had the nerve to tell him she was sorry for her part in landing him in the navy. But she’d been afraid. Afraid he’d hated her for it.
He was like the bridge between the two sides of her life. That side, fabulous and fun, filled with possibilities and excitement and wild times. And this side, with its day in and day out practicality, focused on doing what was smart, what was right, being perfect.
And she was scared that opening the envelope would somehow suck her right back to the other side of the bridge.
And even more terrified at how much she wanted to go there.
Figuring it’d be confetti soon the way she was shaking, she grabbed her brass letter opener, and with a deep breath, slit the envelope open. She gently pulled the thin paper out and without blinking, unfolded it.
And stared.
Frowned and blinked. Then stared harder.
“Is he kidding?” she asked the empty room in bafflement.
Then she looked at the paper again.
What are you wearing?
What was she wearing?
That was it?
She’d risked family disapproval, her father’s fury, and had sucked up every last bit of nerve she had to write to him. She’d sent horrible news, informing him of the downward spiral and death of a guy who’d once been his best friend.
And this was how he responded?
Grinding her teeth, Genna held the letter out at arm’s length, peering at it again. But the words didn’t change.
What was she freaking wearing?
Jaw set, more alive than she’d felt in forever, she stormed over to the small rolltop desk in the corner and grabbed her stationery box. She yanked out a sheet of paper, ripping it in the process. She snatched up another and let her pen fly across the page.
She’d show him.

USA TODAY Bestselling author of over twenty hot books, Tawny Weber has been writing sassy, sexy romances since her first Harlequin Blaze hit the shelves in 2007.  A fan of Johnny Depp, cupcakes and color coordination, she spends a lot of her time shopping for cute shoes, scrapbooking and hanging out on Facebook.

Readers can check out Tawny’s books at her website, www.tawnyweber.com, or join her Red Hot Readers Club for goodies like free reads, complete first chapter excerpts, recipes, insider story info and much more.