Guest Blogger: Jocelyn Leveret introduces us to her newest release THE PHANTOM 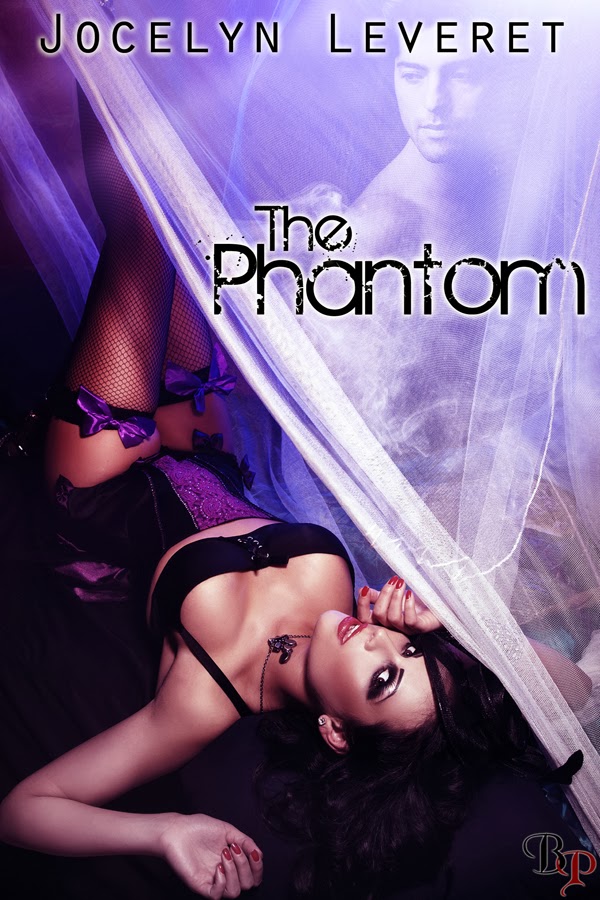 There is a legend known only to women. The Phantom, a ghostly lover, could one night creep into her bedroom and give her the pleasure her body craves. Sasha has been obsessed with him ever since she first heard his story in college. Ten years later, she still dreams of him coming to satisfy her needs. But is he even real?
As a journalist at a women's magazine, she manages to convince her boss to let her do an article about him. Despite a very unsupportive boyfriend and a disbelieving best friend, Sasha begins to interview women who have experienced The Phantom only to find more questions than answers.
Is he really the kind of lover that ties up his women? Could he have actually been around for thousands of years? Will she ever be lucky enough to experience him for herself? The questions only drive her need to know more.

Something watched her. Even in her sleep, the girl could feel it. Slowly, her eyes opened and adjusted to the dark.
No one was there. So where did that chuckle come from?
Her hand shot out for the bedside table, but the lamp seemed to have disappeared. All she felt were her glasses. Quickly, the girl put them on and pushed the frames back up her nose when they began to slip. ''Who's there?'' She called. ''If this is a joke, it isn't funny.''
Maybe it was just the breeze from the open window, or maybe, just maybe, someone moved somewhere in the dark.
At nineteen, the girl had still never been kissed. That all changed when warm, ghostly lips pressed against her own. She had certainly never had a hand on her breast or another slip beneath her simple baby blue nightgown and onto her thigh.  It was enough to raise excited goose bumps over her skin.
''Wh-who are you?'' She asked again, her voice little more than a whisper.
This time, the chuckle made her shiver. ''I am The Phantom of course, and I've come for you, my dear.''


Jocelyn Leveret was born in Abilene, Texas in 1984 and grew up just south of there in a tiny town called Winters that only had a population of about 3000. She discovered erotica at seventeen when she bought a copy of My Secret Garden on accident. Jocelyn was actually looking for The Secret Garden. It turned out to be a happy accident though, and soon she was exploring her own fantasies by writing little erotic scenes and short stories. A couple of years later, she was diagnosed with Partial Complex Epilepsy. Since then, erotica has helped keep her mind sharp despite the disability by constantly exercising her imagination. The result has been longer fantasies she cannot wait to share with her readers.
You can find her online at: https://www.facebook.com/JocelynLeveret

Buy Link for THE PHANTOM