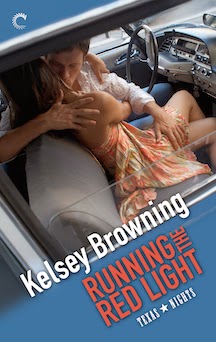 Hey, y’all! So glad to be at Romance Reviews Today! I was lucky enough to book a lunch date with Jamie Wright, the hero from my latest contemporary romance, Running the Red Light. I’m already seated at a booth in the back of the Skillet—an interstate truck stop outside Shelbyville, Texas—when when strolls in right on time.
Jamie resembles his older brother, but he’s more elegantly built than Cameron – probably three to four inches taller, body a combination of runner and basketball player, hair perfect. He’s dressed in a rust-colored polo, jeans, and loafers that look like they cost more than all my shoes put together. No one would mistake this man for just a good ole boy.
He slides into the other side of the booth and says, “Don’t tell me I’m late.”
“You know you’re not.” Lord, he smells good—expensive cologne and…engine grease?
Dolores, the Skillet’s long-time waitress, stops by. “What can I get y’all today?”
Jamie tells her, “We’ll have the seafood risotto, Caesar salads and a bottle of the Chateau St. Menton Pinot Grigio.”
She swats him hard on the shoulder with a menu. “How about tuna salad and iced tea?”
The grin he turns on Dolores is pure schoolboy-caught-smoking-in-the-bathroom. “That’ll work too.”
She flounces off, and he focuses on me. “So what are we chatting about today?”
“The Dangerous Darlings, the street team that helps spread the word about books by me and several other authors, have a few questions for you.”
“Dangerous—I like the sound of that.” Leaning back, he gets comfortable on his side of the booth.
“Amy wants to know what inspired you to go to law school.”
“My brother.”
“Seriously? Cameron wouldn’t touch that kind of career with a ten-foot pole.”
“But he sure as hell stepped up when…”
“When your dad left?”
His jaw tightens almost imperceptibly. Jamie’s much better at keeping his emotions off his face than Cameron is. “I was a skinny, useless little shit when my dad walked out on us. If it weren’t for Cameron dropping out of college, financing my education instead, I wouldn’t have been able to go to law school.”
“But why law?”
“I’ve been told I’m persuasive…and determined.”
I surreptitiously fan myself with my paper napkin. “Next question. Nancy asked what drink you when you go to a bar.”
“Are we talking Dirty Harry’s or some place where people use the indoor plumbing?”
“Your choice.”
“Dirty Harry’s—a long-neck with the top still firmly attached. Otherwise, I’ve been known to order a glass of Jameson on occasion, just to shoot the bird at my old man.”
“How’s that shooting the bird?”
“Because he was three sheets to the wind the night I was born. Got his hands on the birth certificate before my mom could and named me after booze he loved but could rarely afford—Jameson Irish Whiskey.”
A laugh slips out, but I try to hide it behind my tea glass. “Could’ve been worse. You could’ve ended up Wild Turkey.”
“Chick magnet, for sure.”
Lovely, he led himself exactly where I wanted him to go. “You certainly seemed to have attracted Roxanne Eberly. And I’ve seen the way you look at her.”
His gaze turns sharp. “You didn’t happen by Red Light one evening when the lights were still on inside, did you?”
“Why—what was going on?” I know perfectly well what happened on the red velvet chaise in Roxanne’s shop.
He takes a sip of tea from a plastic tumbler with a careless elegance that I expected in a Houston country club, not a small town diner. “Just a…fashion show.”
“Sounds romantic. Which reminds me, Amy also wants the inside deets on the most romantic thing you and Roxanne have done for one another.”
“Are we talking PG-13?”
“Hey, you’re the one who’s being cagey about what happened in Roxanne’s shop.”
“She’d probably say the most romantic thing I’ve ever done for her is relocate a rodent family from the Kilgore house’s pantry. Some women like flowers or jewelry. Roxanne likes me best when I’m fixing something inside that old Victorian.”
“And something she’s done for you?”
“She let me see, be with the real her. On the outside, she’s ballsy and confident. But like all of us, she’s got some scars underneath. The night she finally showed me those was one of the best and worst nights of my life.”
“Why worst?” I prop my chin in my palm to better hear—and let’s be honest—ogle him.
“Nope, not going there. It’s a spoiler.”
“Fine, if you want to be that way. I have one last question for you, and it’s a doozie.”
“Hit me with your best shot.”
“Your eggs—how do you like them cooked?”
He grins, his white teeth contrasting with his dark hair, and that second, I know exactly what’s he’s about to say. “Deviled, of course.”
I so love being right.
—
Readers, if you have any questions you’d like to ask Jamie, fire away. He’ll drop by a few times during the day!

Kelsey Browning writes sass kickin’ love stories and cozy Southern mysteries. Originally from a Texas town smaller than the ones she writes about, Kelsey has also lived in the Middle East and Los Angeles, proving she’s either adventurous or downright nuts. These days, she hangs out in northeast Georgia with Tech Guy, Smarty Boy, Bad Dog and Pharaoh, a Canine Companions for Independence puppy. She’s currently at work on the next book in her Texas Nights series and The Granny Series. Give her a shout at Kelsey@KelseyBrowning.com or drop by www.KelseyBrowning.com. For info on her upcoming releases, subscribe to her Sass Kickin’ News

Release Date: January 6, 2014
Genre: Contemporary Romance, Romantic Comedy
Format: e-book
Tags: Texas, sexy, small-town, contemporary romance, romantic comedy, southern, Kelsey Browning
After wearing a “Least Likely to Succeed” label all her life, Roxanne Eberly is hell-bent on making her Red Light Lingerie store successful. Although the residents of small-town Shelbyville, Texas, are a little…lingerie-resistant, she’ll win them over eventually. So when a former employer sues her, putting a major wrinkle in her careful plans, she reluctantly accepts help from hot-stuff Houston attorney Jamie Wright.
Jamie’s on track to become his firm’s youngest partner, but discovers an unwritten prerequisite—marriage. Turns out, the only woman he wants is Roxanne, but peddling thongs and sex toys isn’t a suitable career for the spouse of an up-and-coming attorney.
Jamie’s tangled up in Roxanne’s lawsuit, her life and her lingerie. But if they’re ever going to make it work, Roxanne’s big-city boy will have to decide what he values more: the career he always thought he wanted or the woman he never thought he’d fall for.
Buys Links:

I just wanted to pop in and say thank you for having me on Romance Reviews Today - so appreciate it!

Love this interview. Jamie is a hoot. My question for Jamie (now that I have read his story) - did it ever occur to him to start his own law practice in Shelbyville?

Hey, Amy - thanks for all your help getting mine and Roxanne's story on the front page of blogs like these!

As for a practice in my hometown...actually, no. Because by the time I'd figured out I didn't hate the place anymore, I already knew I loved Roxanne and the idea of teaching.

And teaching at the university means I get to buy some new jackets and loafers ;-).

I need this book!!! Sounds awesome. I really enjoyed the interview. Thanks for the giveaway.

Thanks for stopping by - best of luck!

Martha - Thanks so much. I really enjoyed writing Jamie & Roxanne's story.

love this interview on this blog. the books sounds very interesting; can't wait to read it!

The more I read about your book, the more I can't wait to read it!