Why Urban Fantasy, or The Writer/Hero’s Journey By Anton Strout 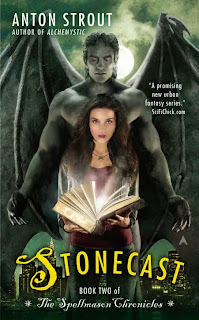 Not to start out on a downer, but the act of writing is a lonely business. Much of the process is done in solitude, and slowly, over the course of writing a book, more and more people become involved in the process.  By the time a reader gets to see the finished product, the author and they make a connection through time and space and there is finally a communion between us.

That’s pretty keen.  It’s a strange and wonderful job… but nothing could have prepared me for the fact that for the most part, authors are on their own until that much later reader connection.  It’s not something you really learn by taking a class on it, either, which, I suppose, is why the teacherless process appeals to me.

Some of the best lessons—in writing, and for the characters in my urban fantasy books—are those we come to without any teachers, without anyone to instruct us on how to do certain things.  It is in those moments that we learn the greatest lessons and find out just who we really are.

Which, I really why I love writing urban fantasy.  It’s a modern journey that I find interesting for myself as the writer because it’s the type of exploration I love to set in motion for my characters.  I do loves me some fishies out of water.

In both my urban fantasy series, our modern world is slowly coming to terms with the fact that the arcane and fantastical exist.    With the Simon Canderous paranormal detective series, our hero had to come to terms with policing the paranormal world.  These were not easy lessons for poor Simon, but I enjoyed the hell out of every twist, turn and lesson to be learned for him on his heroic journeys.

With my latest series, The Spellmason Chronicles, I decided to take that idea of a fish out of water, a student without a master world even further.  In Alchemystic, Alexandra Belarus discovered a family legacy of Spellmasonry—those who can work the arcane art of breathing life into creations of stone.  And while it has run in her family, that magic is all but forgotten, which means the road to learning it is difficult at best. With the just on sale follow up, Stonecast, I pull the camera back to reveal the repercussions of a masterless woman’s struggle to learn a dead arcane art and its effects on modern day Manhattan.  Let’s just say the with gargoyles involved the city will probably need to put up a few more “Falling Rock Zone” signs…

But let’s face it… if us authors made it easy on our heroes we wouldn’t be doing our job now, would we?

I love the beginnings of journeys.  It’s why The Fellowship of the Ring is my favorite of the Tolkien books.  I also love cheesy 80s TV like The Greatest American Hero, where an average guy gets a superhero suit from an alien ship, but is left without the instructions on how to use it.  Creating a modern world in my own work lets me mash up these kinds of tales, but by writing urban fantasy, I give you the reader modern touch points to further pull you into the tale.

How would you or I deal with the discovery of magic or the existence of gargoyles? There’s no on the job training and you can’t really Google it.  At best you could read the Dungeons & Dragons Player’s Handbook concerning spells and hope for the best, but there’s no instruction book, not for the writer or their characters.

And I do hope the readers come along for the journey, having that same sense of what would I do in a world that is slowly revealing the existence of magic, witches, warlocks and gargoyles… let us make that communion, completing the author’s journey as well as that of those in my urban fantasy.

Fantasy author Anton Strout was born in the Berkshire Hills mere miles from writing heavyweights Nathaniel Hawthorne and Herman Melville and currently lives in the haunted corn maze that is New Jersey (where nothing paranormal ever really happens, he assures you).

He is the author of the Simon Canderous urban fantasy series and Alchemystic, book one of the upcoming Spellmason Chronicles for Ace Books, a division of Penguin Group (USA).  Anton is also the author of many short tales published in anthologies by DAW Books.
The Once & Future Podcast is his latest project, where he endeavors as Curator of Content to bring authors and readers together through a weekly news show format.

He has been a featured author guest of honor, speaker and workshop leader at San Diego Comic-Con, Gencon, New York Comic-Con, the Brooklyn Book Festival and many other conventions.
In his scant spare time, his is a writer, a sometimes actor, sometimes musician, occasional RPGer, and the worlds most casual and controller smashing video gamer.  He currently works in the exciting world of publishing and yes, it is as glamorous as it sounds.

Google can tell you a lot, but not everything. Love hearing your view point on writing! And your series sound great, I have to check them out.