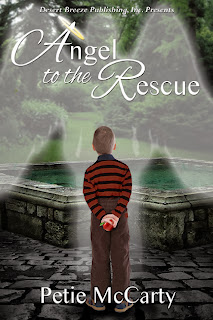 1. Tell us about your release. Give us a blurb to tease us!

Thank you for allowing me to spend time with your Romance Reviews Today readers! I'm Petie McCarty, and I write contemporary romances tinged with action-adventure or elements of suspense. My December release Angel tothe Rescue is the second of the Rescue Angel Romances -- love stories with an angel hidden in the plot. The angel's identity isn't revealed until the finale unless you figure it out first.  :)
The first Rescue Angel Romance -- No Going Back -- was recently selected as an EPIC eBook Award finalist.
In Angel to the Rescue, child psychologist Rachel Kelly isn't quite sure how to handle the situation with her newest client -- a six-year-old boy who says he can talk to angels and one is coming to help Rachel. She already has her hands full of trouble this Christmas season, and things quickly take a turn for the worse when a stalker crashes Rachel's Christmas party and takes her young clients hostage.

Police negotiator, Lt. Jake Dillon, walked away from his fiancée Rachel when she suddenly balked at having kids. His kids. Yet when the hostage crisis erupts, Rachel calls Jake first. Now he has a choice to make -- stand back and wait for the cavalry to save Rachel or step in and try to save her himself. Time is running out, and Jake may be their only chance for rescue.

Unless Rachel's little angel-spying client is telling the truth…

2. Name five things (not research notes) that are on your desk right now.

Wow! Five things. Hmm...
I am looking at:  1) review request spreadsheets [since I had a release this month]; 2) dozens of index cards with plot points or dialogue; 3) at least 5 ballpoint pens; 4) two steno pads [first drafts are always in longhand -- yikes!]; and 5) six angel figurines [given to me as gifts by my sweetheart or family].

The best writing advice I ever received came from my younger sister, Katy, who more than once said, "Don't quit. You've worked too hard and too long to give up now." This usually came after a particularly painful rejection when I insisted I was going to quit writing. The advice sounds so simple, but when followed, makes a life-changing difference in a writing career.
The great Stephen King once said, "The only difference between published and unpublished writers is the published writers never gave up." So I didn't. If you write… don't.

I have two kinds:  weekday writing days and weekend writing days. A weekday writing day has me off to my day job as a biologist at "The Most Magical Place on Earth." When that fun is over, I head home, hug my bird [yes, you can hug a bird] and my dog, run two miles on my treadmill, have dinner with my sweetheart, and spend anywhere from two to five hours on either marketing, editing, or writing a new story. And no, I don't sleep much.
My weekend writing day usually involves ten to twelve hours of everything above except the day job. I'm just getting started with my writing career -- only four published novels -- so I don't often take a day off.

That's a hard question. There are so many I would love to have cocktails or dinner with, but if I have to pick only five, they would be the following: 1) James Patterson; 2) Monica McCarty; 3) Suzanne Brockmann; 4) Margaret Mitchell; and 5) Jennifer Crusie.

Well, you already know about my biologist career, so if I could pick a new one, it would be as a Champion Barrel Racer on the rodeo circuit. Now that would require some serious skill.
I know... go figure.

Thanks again for letting me spend time with the RRT readers. If ya'll find time to read over the holidays, please give one of my books a try. Visit my web site at http://www.petiemccarty.com/   or my Facebook page at https://www.facebook.com/petie.mccarty 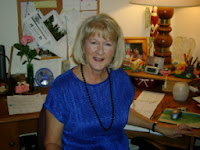 Petie earned a zoology degree from the University of Central Florida and has worked as an aquatic biologist for most of her career. She even spent two years surveying Florida lakes and streams by airboat. Petie is a member of Romance Writers of America, and she shares homes in Tennessee and Florida with her horticulturist husband, a spoiled-rotten English Springer spaniel, and a noisy Nanday conure named Sassy who made a cameo appearance in Angel to the Rescue.

Enjoyed your interview about your newest release. I'd pick Margaret Mitchell, too. I loved Gone with the Wind and have just recently released a novel in that time period. Ever since I read her book, I've loved Civil War or plantation novels. Blessings for success with your angel series. They sound like great books. Author BJ Robinson

I like the idea of a hidden angel. Will have to try this series.

Gmapeony, send your address to petiemccarty@aol.com and I'll mail you an autographed book cover.