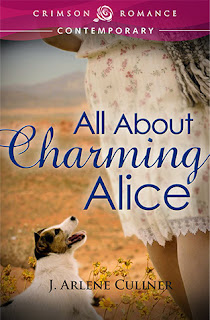 My newest romance, All About Charming Alice, is, quite simply, a love story. Both my main characters are kind, generous and intelligent – in other words, well suited to each other. When they first meet, however, neither thinks they’ll ever have a relationship. Their interests are so different: Jace is an historian; Alice is a herpetologist (she studies and protects snakes). Jace, a city boy, loves living in Chicago, whereas Alice hates cities and needs the vast expanse of the Nevada desert. But their attraction is so immediate, so intense, they have to find common ground.

In writing, All About Charming Alice, I wanted to present two very interesting, passionate people who have great conversations and a purpose in life as well as sexual attraction. In other words, Alice and Jace have a chance of making a long-term success of their relationship despite their differences. I am so often frustrated by romance books where the hero and heroine seem to have little in common other than sex, having a baby together, or surviving some danger. What will happen, I always wonder, when a few years go by? Will they be bored silly with one another and dreaming of some other, more perfect romance?

I have lots of favorite scenes. I love it when Alice is threatened by a drunken snake hater and Jace comes to her defense (although he’s terrified of those creatures). I love the local dance scene where the Old Boy’s Band bashes away with great incompetence, and Alice admits she invented a love story with a local rancher just to protect herself from Jace. I also love the scene where Alice finally decides she wants Jace in her life and in her bed but can’t actually come out and tell him (discouraged by her, he’s been playing it cool). Unable to sleep, she lurks in the corridor outside his room, not daring to knock, terrified he’ll wake up and find her there, and forbidding herself to tell him how much she wants him. And then, when he does find her there, she tells him after all.

I’ve been a writer (although not a professional one) since my early schooldays when, instead of doing homework or paying attention to the teacher or participating in class, I passed my time writing out stories. Needless to say, I was always a bad student — perhaps the worst student in the entire school. I once received an astonishing -4 out of 100 on my report card. To this day, I wonder how the teacher arrived at that number.

I try to stick to keeping an appointment with my computer every afternoon from around two or three until seven. Of course, there are days when I’ll go to a local café to write (I’m sitting in a very noisy one at the moment) or I’ll write on the train, or I’ll wake up at five in the morning and start taping away – but that’s when I’m particularly inspired, or when stories wake me up.

Not that I can think of. Of course, I’m happier and perhaps more successful when I have a few dogs snoring at my feet and a cat or two slyly watching from some corner.

That the publishers, the editors, the secretaries, the publicity people, the printers, the cleaning staff, the designers, the illustrators, the distributors and all the other people involved in producing a book can make a living whereas the writer (on whom all those people depend) usually doesn’t.

Quite frankly, there are so many incredibly talented writers in the world, I feel it’s extremely pretentious of me to dare join their ranks.

Some members find it interesting, some are indifferent and one or two are nasty and jealous.

My great passion is music. I play the oboe, English horn, oboe d’amore, flute and piccolo, and spend three hours every morning practicing. Strictly as an amateur, I play in two symphony orchestras, two bands and a chamber music group. From time to time, I also travel to other parts of the country (France) to play with other groups.

They can visit my site: www.j-arleneculiner.com


They can come visit my blog: http://j-arleneculiner.over-blog.com


They can write to me at: romance@j-arleneculiner.com and I’ll always answer.


All About Charming Alice, (published by Crimson Romance) can be bought at:


And thank you everyone for inviting me to Romance Reviews Today.


Alice Treemont has given up hope of meeting the right man and falling in love. Living in depopulated Blake’s Folly, a quirky community of rusting cars, old trailers, clapboard shacks and thirsty weeds, she spends her time cooking vegetarian meals, rescuing unwanted dogs and protecting the most unloved creatures on earth: snakes. What man would share those interests? Certainly not Jace Constant whose life in Chicago includes elegant women, fine dining and contemporary art.

Jace has come to Nevada to research the new book he’s writing, but he won’t be staying; as far as he’s concerned, Blake’s Folly is hell on earth. He’s disgusted by desert dust on his fine Italian shoes, dog hair on his cashmere sweaters and by desert bleakness. As for snakes, he doesn’t only despise them: they terrify him.

So how is it possible that each time Alice and Jace meet, the air sizzles? That she’s as fascinated by him as he is by her? That they know their feelings go deeper than raw desire?

Still, it looks like this relationship is doomed before it starts: Jace won’t be around for long, and Alice wants to avoid the heartbreak of a short fling.

In need of some juicy romantic gossip, the other 52 residents of Blake's Folly have decided Alice has been alone for long enough. The attraction between her and Jace is obvious to everyone, so why worry about essential differences? If you trust in love, solutions do appear.

But don’t those solutions call for too many compromises, too much self-sacrifice?
at December 05, 2013

Any book cover that has a dog on it is worth me picking it up. Nice interview, J. Arlene. I agree with you about the family support. I have one who is jealous, extremely so, and she's the one who lives closest.

Lovely excerpt. I have your novel on my Kindle and I can't wait to read it. Oh, and a novel about Hungary? Sign me up! Best of luck with all of your future endeavors.

Wow, Arlene. You couldn't have picked two more opposite people to fall in love. Should be interesting to see how they work that all out. Great interview with unique questions and answers!

Nice cover! I agree with carolrittensmith, should be interesting...can't wait to read.

Great interview! My hubby would envy you, living in France; he spent a lot of summers in Brittany as a kid with his mother's family. Your book sounds so interesting!

I love to read about other writers and their novels. You bring up a vary valid point about most romance novels being only about chemistry and sex, which is unrealistic. True love is based on more than physical attraction. Being attracted to another's intellect and interests is equally as more important for a relationship to last. Your novel sounds like an interesting and unique read.

Thanks to everyone for coming in to visit. It's so nice to have feedback!

Great to hear about the characters in your story and had a good chuckle at your statement that everyone except the writer makes a living off our books! So true! Good luck with your lovely book.