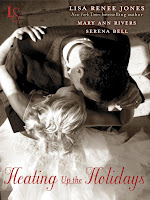 The holidays are coming: Thanksgiving, Christmas, and the New Year. Here are three hot tales to help celebrate the season.

After a devastating incident involving her lover and made worse by her father (her only family), Kali Miller leaves her job writing fluff pieces for Texas Star and moves to Las Vegas. But when she arrives, the reporter job she was to start there has fallen through. She's broke and desperate, but determined to toughen up and make a new life for herself. She lands a temp job as secretary for the CEO of the Vantage Hotel and Casino group. When she meets Damion Ward, she has mixed feelings. The totally handsome man gives her immediate tingles, but the last thing she needs is another powerful, arrogant man in her life. A crisis is brewing within the corporation Damion recently took over and he needs a capable secretary. He's impressed with Kali's skills—and with her looks and personality—and although she stands up to him and sparks fly between them, he likes that. However, this is a workplace and lines must not be crossed . . .

With lively and sensuous interaction between two well crafted characters, Play With Me packs a lot of story into just under 100 pages.

Jenny Wright's single mother raised her, and they are best friends. But a time comes when Jenny needs to go out into the world to put her doctorate in microbiology to good use. She wins a research position at the Lakeview State University in Ohio. About the same time she realizes she's losing her peripheral vision and is diagnosed with retinitis pigmentosa. She will most likely one day lose all her vision.

Snowfall is a most unusual, yet strangely riveting tale in spite of the serious theme. The whole is narrated by Jenny, dialogue and all. Other characters are few. Besides her mother, the most important are C Ford, whose house she moves into after he moved out. They only meet on line, but he's most important during the time when she becomes almost a hermit except for her lab on campus. Then there is her occupational therapist who tries to prepare her to function when the unthinkable happens. We watch as Jenny comes to terms with life's changes. We are privy to her joys and fears and very much so to her sex life.

Miles Shepard is in Boston to get away from the uncomfortable—and unfair—suspicion he's under for embezzling a fortune from the non-profit organization he founded to feed hungry children. On top of it all, his fiancée dumped him. He came to Boston to visit his best—and seemingly only—friend Owen. It's New Year's Eve and Owen dragged him to a posh party, but he's not enjoying it…until his eye is caught by stunning and vibrant woman! To synopsize: the two meet and make an immediate connection. They kiss at midnight, and are unfortunately separated before learning each other's name. Miles returns to Cleveland believing he will never see her again, but what has he to offer a woman anyway? Miles is reckoning without Nora Hart's determination to see the man again no matter how long it takes . . .

With a super pair of characters, sensuous love scenes, and gripping dialogue, After Midnight will have readers racing to get to the next page.

I had no idea Loveswept has a whole line of digital books, did you? Check outhttp://www.readloveswept.com to see the variety they have to offer.