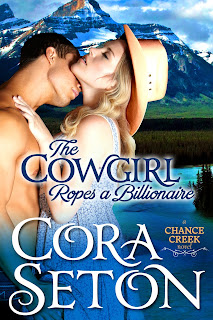 The Cowgirl Ropes a Billionaire is the fourth book in The Cowboys of Chance Creek series but it’s a complete standalone novel in its own right. The novel stars Bella Chatham, a veterinarian who owns the Chance Creek Pet Clinic and Shelter. Bella has a problem—she’s being eaten out of house and home by the stray animals who end up in her shelter. Too tender-hearted to put down those that don’t find homes, she’s in danger of losing her business. Her friend and receptionist, Hannah, decides enough is enough and gets her on the new reality television show, Can You Beat a Billionaire? If she wins, she’ll get 5 million dollars. If she loses, she’ll have to marry Evan Mortimer, her billionaire opponent.

My favorite scene is when Evan betrays his interest in Bella. Each of the main characters has important reasons to come on the show and win it, so when they find themselves attracted to each other, it’s not a good thing. If they were smart, neither one of them would expose their feelings to the other for the duration of the show, but Madelyn Framingham, the director, only gives them one tent to share each night. As the contest progresses, the tent keeps getting smaller, so after competing all day Evan and Bella have to sleep in close contact each night. And it’s harder and harder for them to hide anything from each other. Evan can’t use words to let Bella know what he’s feeling—there are cameras on them at all times, even at night—so he just gives her a little touch, but oh what a touch. It changes everything.

I wanted to be a writer as a child, but I had absorbed the idea by the time I was a teenager that it wasn’t possible for “normal” people to be writers and I didn’t expect to be one of the lucky ones. While I was an English major in college, it never crossed my mind to publish fiction. All the essays and descriptive papers I did for my classes killed any joy in the writing process, so I let it all go for years until I had children and reading out loud to them rekindled my love of the written word. When they all got out of diapers I began to write young adult novels, but it wasn’t until I turned to romance that things took off for me.

I get up and walk my daughter to school, then head upstairs to my attic office to write. I generally take care of emails and journaling first, hit a couple of forums, then get right to it. If I’m doing a first draft, I aim for 5,000 words. Sometimes I do this by noon, other times it takes an additional hour. Then I switch to editing and other tasks for the rest of the day. Writing is my full-time job, but since I’m my own boss and work from home, it’s really flexible. During first draft weeks I try not to do anything else until I’ve written those 5,000 words. Otherwise I might go to lunch with a friend or run errands for a few hours mid-day, and then work into the evening to meet my goals.

I think my only real quirk is that I write first drafts so fast—a 50,000 word manuscript in two weeks—and because I go so fast I’m kind of a mess by the end of the second week. I tend to get weepy around Wednesday or Thursday of week 2, but my family knows that and they ply me with Diet Coke, chocolate and television until I’m better.

How much fun it is to control your own career. And how much I love writing. I used to think I could only write when I was in the mood. Now I’m always in the mood.

All of the authors at Romance Divas. They are an amazing bunch of women (and men!) who share everything they learn about the craft and business with each other. I couldn’t have gotten as far as I have without them.

My family loves it! They’re all so proud of me. I had a hard time showing my first book to my mother because of the spicy bits it contains. Both of my parents are very literary people, so I was afraid I’d hear about how un-literary my novel was. My mother really surprised me—she loved the book and was genuinely interested in the characters. She had questions about what would happen to them in the future…I was blown away.

My husband and I are also in the process of turning a one acre property into an urban hobby farm. He’s the mainstay of the operation and I pitch in when I can. We’re focusing on strawberries, raspberries and fruit trees, but do salad veggies, etc., too. We have three hens who are more pets than anything else, but we do get three eggs a day out of them. Otherwise, I love all the girly, creative arts—sewing, embroidery, art journaling, collages, making costumes and so on. The other half of my writing office is all shelves of paints, beads, pencil crayons, collage materials, fabric, sewing supplies, journals and more. When people tour our house for the first time they never want to leave my office, which is a little embarrassing because it’s a fairly private space. Once they start reading my whiteboard lists or looking too closely at my latest collage I have to urge them toward the door.

I will release the final book in The Cowboys of Chance Creek series in January – The Sheriff Catches a Bride. After that I have a new trilogy coming out, The Mathesons of Chance Creek. It’s also set in the fictional town of Chance Creek and revolves around three brothers who share a ranch. Readers of the first series will recognize the Matheson boys and their father, Holt, who has already played some tricks to get one of his sons married.
Now Holt’s turning his attention to Jake, Ned and Luke Matheson. No longer willing to let his sons choose their own brides, he’s decided to pick them out for them…with some disastrous results.

The Mathesons of Chance Creek novels will come out early in 2014. After that, I have so many ideas, I’m not sure what I’ll pick first. I’m far from tired of Chance Creek, Montana, so while future series will focus on new characters, reader can rest assured they’ll be able to visit old friends again.

Sign up for my newsletter and read my blog at www.coraseton.com
Chat with me on Facebook at https://www.facebook.com/CoraSeton
a Rafflecopter giveaway < script src="//d12vno17mo87cx.cloudfront.net/embed/rafl/cptr.js">


Bella Chatham will lose everything – her veterinary practice, her animal shelter, and even her home –
if she can’t find another source of income, fast. So when her best friend signs her up for the hot new
reality television show, Can You Beat a Billionaire, Bella accepts the challenge and hopes against hope
she can win the ten million dollar prize. If she doesn’t, it’s bye-bye pet clinic and shelter, bye-bye Chance
Creek, Montana, and hello to marriage to the billionaire for a year!
Evan Mortimer, billionaire, can’t believe he’s reduced to competing in a television contest to win a wife.
Unfortunately, it’s the only foolproof way to secure his position as head of Mortimer Innovations. At
least he’ll be able to dump his “spouse” at the end of the year. He has no intention of getting hitched for
life.
Bella doesn’t expect her adversary to be handsome – or funny, or compassionate – but Evan’s all three,
and he’s proving a tough competitor, too. When they end up sharing a tent – and a sleeping-bag – her
body betrays her with a longing so deep it cuts her to the core. Still, this cowgirl must stay strong. If Evan
uncovers her secret fears, he’ll use them to win the contest – and then he’ll own her for a year. She’ll be
out of luck, out of cash, and stuck being Mrs. Mortimer until he kicks her to the curb. Too bad she can’t
decide which is worse – winning the show and losing Evan forever, or losing the show and only being his
temporary wife.
Evan can’t believe he’s falling for the one woman who doesn’t want him. This cowgirl’s not impressed
by his money, his name, or his inability to sleep in a tent with her for an entire night, but every look
and touch she gives him sends his desire through the roof. With a director determined to use his
claustrophobia to make him look like a fool, and an adversary so sexy he can hardly see straight, he’ll
need all his savvy to come out on top. Too bad he’s going to lose no matter how this show turns out.
If he beats Bella, he’ll destroy the first woman he’s ever loved. If he doesn’t beat her, it’s bye-bye
Mortimer Innovations.
Will either of them remember in time that it’s not who wins or who loses – it’s how they play the game
that really counts?
AUTHOR BIO: 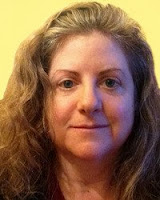 Cora Seton loves cowboys, country life, gardening, bike-riding, and lazing around
with a good book. Mother of four, wife to a computer programmer/eco-farmer, she ditched her
California lifestyle eight years ago and moved to a remote logging town in northwestern British
Columbia.
Like the characters in her novels, Cora enjoys old-fashioned pursuits and modern
technology, spending mornings transforming a neglected one-acre lot into a paradise of orchards,
berry bushes and market gardens, and afternoons writing the latest Chance Creek romance
novel on her iPad mini. Visit http://www.coraseton.com to read about new releases, learn about
contests and other cool events!
Buy links:
Amazon (ebook) http://www.amazon.com/Cowgirl-Ropes-Billionaire-Cowboys-Chance-ebook/dp/B00GFZRFKM/ref=sr_1_1?s=digital-text&ie=UTF8&qid=1383678590&sr=1-1&keywords=the+cowgirl+ropes+a+billionaire

Congratulations to Cora on her new book! I enjoy reality show competitions and this sounds like an interesting one.

I love finding new authors and their books! This one sounds really good. Thanks for the chance to win.

Love the tie in to today's TV reality shows. I'd love to read how desperate Bella and wealthy Evan interact! It's hard to picture Evan enjoying camping in a tent. I guess he surprises Bella too.