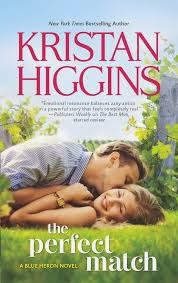 Honor Holland feels her biological clock ticking at the age of thirty five, so turns to the man who not only has been her best friend since childhood, but her on and off again lover—Brogan. But instead of his agreeing to marry Honor, he breaks things off. She is devastated, but even more so weeks later when she finds out her best friend, Dana, is now romantically involved with Brogan. Already desperate for fear that she’ll never have a baby, Honor agrees to a blind date…who turns out to be Englishman Tom Barlow, who needs a green card so that he can stay in the US to be close to his almost stepson, Charlie.

But Honor and Tom don’t exactly hit it off. He mocks her feelings for Brogan, which are still raw, and she thinks he is a stuffy professor. Yet, in order to get what they both want, they have no choice but to try to make it work. Tom thinks Honor is lost in a hopeless cause continuing to love Brogan, while she watches helpless as Dana becomes pregnant with Brogan’s child. The one constant in her life is her dog, Spike, a runt of a spitfire who snarls whenever Tom is nearby. Add in Charlie, who’s moody, and it’s going to be a miracle if Honor and Tom can ever make it to the altar.

I must admit that in THE PERFECT MATCH I wondered if there would be a happily-ever-after ending because of the many issues between our couple. Tom and Honor quarrel and quibble over the littlest things. Tom is still hung up on the past with Charlie’s mother, a woman who died while on a weekend tryst with Charlie’s father. Honor devoted many years of her life to a man who treated her like a sex buddy when someone else wasn’t available. Honor also thinks more of her dog than she does Tom. Love me, love my dog. But their plan to marry for convenience—so Honor could have a baby and Tom could get his green card—may ultimately doom them if they can’t even live together in harmony. But in the end, obstacles are removed, but will it too late for them to make a future together?

Honor’s family plays a large part in THE PERFECT MATCH. She discovers her father and their longtime housekeeper, known as Mrs. J throughout the story, have fallen in love. I don’t recall that we did ever learn what Mrs. J’s first name is, but this is part of the quirkiness of THE PERFECT MATCH. Honor’s sister, Faith, is a happy newlywed and her story can be found in THE BEST MAN. Then there are the grandparents—feisty and stubborn, they give Honor fits as she tries to convince them to move to a retirement complex. Tom has his own problems as Charlie remains unresponsive to furthering a relationship at first, but is finally drawn out a bit. Can Tom win the battle at gaining Charlie’s affections?

THE PERFECT MATCH is more like a Women’s Fiction tale than a Contemporary Romance, as the fights between Tom and Honor, as well as their trying to avoid any romance is pretty much the main theme. But bear with THE PERFECT MATCH, because by the end, you’ll be smiling. Kristan Higgins knows how to deliver the final punch in a story and keep readers happy, and this tale is no exception.

With its quirky characters and offbeat plot, readers are in for a fun treat with THE PERFECT MATCH.

What if the perfect match is a perfect surprise?

Honor Holland has just been unceremoniously rejected by her lifelong crush. And now—a mere three weeks later— Mr. Perfect is engaged to her best friend. But resilient, reliable Honor is going to pick herself up, dust herself off and get back out there...or she would if dating in Manningsport, NY, population 715, wasn’t easier said than done.

Charming, handsome British professor Tom Barlow just wants to do right by his unofficial stepson, Charlie, but his visa is about to expire. Now Tom must either get a green card or leave the States—and leave Charlie behind.

In a moment of impulsiveness, Honor agrees to help Tom with a marriage of convenience—and make her ex jealous in the process. But juggling a fiancé, hiding out from her former best friend and managing her job at the family vineyard isn’t easy. And as sparks start to fly between Honor and Tom, they might discover that their pretend relationship is far too perfect to be anything but true love...


ENTER TO WIN A COPY OF THE PERFECT MATCH!

Thanks for the giveaway! I love Kristan Higgins stories and this looks like another one filled with laughter and love.

Count me in. Thanks for the chance.

I've read wonderful things about THE PERFECT MATCH. I do like the marriage of convenience theme plus quirky characters...Yes Please! I'd love to win and to read THE PERFECT MATCH, Honor and Tom's love story!

The Perfect Match sounds great. I love the cover. Thanks for the giveaway.

This sounds like a really good book! I'd love to be entered to win it. Thanks for the chance.

I enjoy reading Kristan Higgins books and this one sounds like fun, too!