Q & A with Pamela Sherwood! 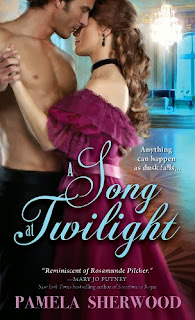 Set in late Victorian England, A Song at Twilight is a second chance at love story about a professional singer, a rising star of the opera and concert stage, and the man she has never been able to forget. Four years before the story begins, Sophie Tresilian and Robin Pendarvis were deeply in love and tentatively planning a future, only to have their dreams shattered by the emergence of secrets from his past. Since then, Sophie’s become the darling of the music world, celebrated and courted--and then Robin walks back into her life, with news that could make all the difference to them both. Will she risk her heart again and fight for the happy ending they were denied the first time around?

Writing has been a part of my life since I was a kid, actually. I became a voracious reader early, and from that point, it was a natural step to making up my own stories and entertaining myself with them during boring classes and long car trips. I knew early on that I wanted to be a writer, but it was some years before I committed to it full-time. I worked in academia for a number of years, earned a couple of degrees, taught literature and wrote reference articles--and then hit one of those pivotal birthdays that end in a 5 or a 0, and realized that if I ever wanted to see any of my own works published, I needed to commit to that goal. So by the following year, I had a completed manuscript to work with, and the quest to find an agent and then a publisher began.

Well, reading is always a keen source of pleasure for me--losing myself in other authors’ worlds and enjoying their characters’ adventures. But I also cook. There’s something oddly reassuring about handling concrete things like utensils and appliances, and combining ingredients to make something delicious. It’s still a creative process, like writing, but the results are much more immediate.

I’m usually at my most productive in the morning, so that’s when I try to write. And I set myself a goal--usually, 1000 words a day. Once my story is well and truly launched, I generally don’t have a problem meeting that quota. During the afternoon, I take a break. I handle social media and correspondence, and sometimes get away from the computer to give my eyes a rest. I’ll listen to music, or read one of the countless research books I have lying around. If I’m feeling “blocked,” I’ll go mess around in the kitchen for a while. In the evening, I’ll sometimes get a second wind and write a bit more. I like to leave myself a hook or an opening to whet my appetite for the next day.

I’m not a particularly quirky writer, but I have been known either to stay up very late or get up very early when inspiration strikes. Because you can’t count on ideas to show up only when it’s convenient. They come when they come, and you have to be open to them when they do. My nearest and dearest make disapproving noises about my occasionally erratic schedule, but they understand that’s not about to change!

I have several projects in development, awaiting the “green light.” The one most likely to be finished first is “Dance Among the Stars,” a novella featuring Thomas Sheridan and Amy Newbold, the secondary couple from Waltz with a Stranger. They travel to Newport, Rhode Island, for the summer season, where they find romance, adventure, and intrigue. I’m also plotting a book about Sophie’s brother, Sir Harry Tresilian, who falls in love with the beautiful but mysterious tenant renting his family’s summer cottage.

I can be found at several places, and I do respond to blog comments, emails, tweets, and Facebook notifications. And I always enjoy hearing from readers, so please, don’t be a stranger!

Thank you for hosting me on Romance Reviews Today!

(The moment when the hero and heroine first meet is often a magical one, ripe with unspoken possibilities. Here, seventeen-year-old Sophie Tresilian unknowingly comes face to face with the man who will be her destiny.)

She’d never been the belle of the ball before, Sophie reflected bemusedly, and while it certainly was gratifying, it was unsettling too. Young men who wouldn’t have spared her a glance last year crowded around her now, all lavish in their praise of her performance and eager to claim her dances.
Summoning a smile, she set down their names on her dance card, secretly astonished at how fast her waltzes, polkas, and even quadrilles were going. She sensed rather than saw a slight opening in the throng and turned toward it with relief, only to come face to face with…
Oh, my.
A man she’d never seen before stood watching her with an intensity that unsettled her more than the most fulsome compliments she’d received tonight. A tall, lean man, with dark hair and the bluest eyes she’d ever seen. Eyes that made her think of sapphires or midnight skies…
“Good evening, Mr.—?” Sophie let the last word trail off questioningly, hoping she didn’t sound as flustered as his unwavering regard made her feel.
“Pendarvis.” His deep voice held only a trace of a Cornish accent. “Robin Pendarvis. Your brother invited me here tonight.”
Recognition sparked at the name. “Oh, then you must be related to Simon Pendarvis?”
“His grandnephew,” he confirmed with a slight bow. “May I compliment you on how well you sang tonight, Miss Tresilian?”
She felt herself flushing as she had not done after far more extravagant praise. “Thank you, Mr. Pendarvis. I was in good company—there are some wonderfully talented musicians in the county.”
“So I’ve discovered.” He paused. “I was wondering if I might have the pleasure of a dance with you? The first waltz, perhaps?”
Sophie glanced at her card, experiencing a pang of regret when she saw the name already beside it. “I’m afraid the first waltz is claimed. But the supper dance is free, and it is also a waltz—if you’re still interested.” Please be interested, she thought with an urgency that surprised her. But this mysterious man with his unquiet eyes drew her as irresistibly as the moon drew the tides. If he would just partner her in this dance, take her into supper afterward…
He smiled, the expression transforming his angular face, and for just a moment, she forgot how to breathe. “I am indeed. Please put me down for that, Miss Tresilian.”