Q & A with Lauren Linwood! 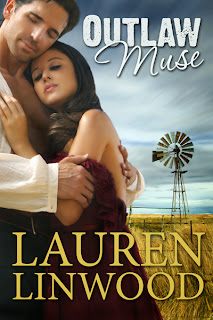 Outlaw Muse brings Daman Rutledge and Serena Sullivan together on the Great Plains in the 1870s. Daman is an English playwright who’s lost his muse and beloved brother to untimely deaths and is struggling–not only in getting words down for a new play but simply in wanting to live. His step-brother, the family earl, has invested in American cattle and wants to add land there to his holdings, which many English and Scots noblemen did after the Civil War. He sends Daman to the American West to shake him up and give him a new purpose in life. Daman, who hates to ride, winds up going on a cattle drive and arrives in Abilene, Kansas, a famous railhead.

When he arrives, he witnesses a woman about to be executed (for a murder she didn’t commit) and does the unthinkable! He rescues the beautiful stranger and they take off with a crooked sheriff  in hot pursuit. A schoolmarm, Serena came out west on the Orphan Trains and was separated from her twin brother at one of the selection stops. She’s never given up on finding him one day. As they try to escape the long arm of the law, Daman seeks to prove Serena’s innocence before it’s too late. They find love—and the truth—on a journey that changes their lives.

Can you tell us a little about your favorite scene in the story?

Picking a favorite scene is like picking a favorite child! Several I enjoy would actually give away some key ingredients that factor into the end of the book, so I’ll go with an earlier scene. Daman wants to throw the authorities off their trail, so he instructs Serena to buy a ticket on a train. Once it leaves the station, he wants her to jump from it and double back to where he’ll be waiting for her. She thinks he’s insane to have her attempt to do something so crazy, and their ensuing conversation is very interesting.

I was an only child for almost six years before my sister and brother came along, and I entertained myself by making up stories for my dolls and stuffed animals to act out. When I finally learned to read and write, I wanted to capture those stories on paper.

Typical means there’s no routine! Some days I might write for twenty minutes; other days when I’m in the groove I might look up and see I’ve been cranking things out for four hours. I do have a typical pattern for starting a book, though. My first goal is to hit upon the perfect names for my hero and heroine. Once I have these, I begin to see them physically and then I create a character sketch, which has their personality traits and background and back story.

After I know my characters well, I think of situations and eras to place them in. What follows is a brief outline (and I do mean brief, so I-and my characters-have lots of flexibility!) to give me some direction of the plot.

Do you have an interesting writing habit or quirk?

I love to chew gum when I write. I don’t know if it stimulates my thought process, but when I really get involved in a scene and I’m banging away on the computer keys, I’ve caught myself chomping away, chewing faster and faster as I write. Other than that, I simply like to have my laptop while seated in my Writing Chair (with an optional afghan if the weather’s cold). Music distracts me from my characters, but I do put on a noise machine every now and then and write to waves coming in and out or an afternoon shower coming down.

What was one of the most surprising things you learned as a published author?

The biggest surprise is how much time the business end takes away from the creative writing process. I thought landing a contract and beginning to publish would be my focus, yet suddenly social media is something that eats up too much time. I found it was a necessity in this day and age for an author to have a website, to blog (which is really pretty fun), a Facebook page, and a Twitter account. All this makes my head spin! My web designer put my Twitter box on my author site and told me to start tweeting so he could see if it was working. I told him I wasn’t interesting enough to tweet! He insisted, so I gave in and actually do tweet. And Facebook. And blog…sigh…

I always enjoyed reading romances, but especially ones by historical authors such as Amanda Quick, Julie Garwood, and Mary Jo Putney. Those authors told such great stories with interesting characters against varying historical backdrops. When the burning desire to write and become published became overwhelming, I know those women and the standard they set were in the back of my mind. I also give credit to Stephen King. I think he creates such believable characters. He puts them in extraordinary circumstances, but his readers buy into the plot because the characters are so relatable.

My biggest influence has been my incredible critique group. They are my writing partners and my dear friends.  I can’t give enough thanks and praise to Lynn McKade and Aven Ellis and their insight over the past few years. We meet twice a month, and these ladies have been my cheerleaders as well as the sources of great advice as far as where I’m taking my characters and what I need to do to make my writing sing.

They are so supportive and truly happy for me. They know I’ve wanted to share the stories in my head and my incredible people for a long time. I couldn’t ask for a better fan base than my family.

Like every writer, I’m also a voracious reader. Some of my favorite authors include Victoria Thompson, Steve Berry, Brad Meltzer, and Karen Robards. I walk four to five miles every morning. It not only allows me to indulge in Mexican food and ice cream, but I love being outside and doing something healthy that helps stress melt away. I’m an avid moviegoer, sports fan, and I can’t get enough of House Hunters or MasterChef (although Jr. MasterChef is quickly becoming my new fav).

Can you tell us about what’s coming up next for you writing wise?

A Game of Chance will be released January 8. It’s a fun western historical romance that’s full of twin separated at birth and mistaken identities that lead to some interesting twists. It’s not a typical western in that it takes place in the very cosmopolitan city of San Francisco, which rivaled European cities at that time with its culture. A Change of Plans will be released next, and it’s the story of Maggie Rutherford, who writes dime novels under a man’s pen name. She leaves New York City and heads west to experience firsthand what she’s been writing about. Of course, she meets a cowboy (who’s really a gambler running from a vengeful gunslinger) and love blossoms. And yes, she even gets a new book out of the adventure!

I can be found at:

Thanks for hosting me today and letting me share a little about myself and my books!

Lauren, thank you for the kind words about your critique group partners. WE LOVE YOU! And I NEVER knew that about you chewing gum when you write! How did I not know that???

I suppose I can bring a pack of gum tomorrow night. We can chew the fat, so to speak! Loved what you sent, BTW!!