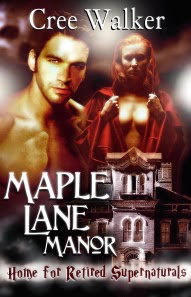 Maple Lane Manor, Home for Retired Supernaturals is a paranormal romantic comedy. I know the genre sounds like a mouthful but it truly is the best way to describe this story. It a about a girl named Maple Lane, who was named after the family run retirement home she was raised in. After years of avoiding becoming an adult, she’s forced to face the music, when her vampire grandmother mysteriously dies and leaves the Manor to Maple. Maple accepts the challenge, knowing that if she doesn’t step up to the plate the quirky group of elderly supernaturals she was raised with will be plugged into the nearest nursing homes and her family home will be sold to the highest bidder.

Maple faces several challenges along the way, including trying to ignore a growing attraction between herself and her newly hired handyman/incubus/part-time male stripper, Derek Hoyt and facing her lifelong arch nemesis, Stacy Three Names.

It is a story about life, love and family, filled with a little magic, bad luck and finding faith in oneself.

I love this question! Okay, I would honestly have to say that the one scene I love best would probably have to be when Maple rescues Derek from falling off a ladder by pulling him through her bedroom window. In an effort to prevent himself from falling on top of Maple he grabs her underwear drawer and rips it out of its slot. In the end, he still falls on Maple and makes the tantalizing discovery that she has a very extensive collection of expensive underwear and sexy lingerie.

That would have to be that I’ve finally begun to believe in my ability to be a writer. Before I kind of treated my writing as more of a hobby but after writing Maple Lane, I feel as though I do indeed have the ability to write and create amazing stories.

I’ve always been a big reader and some hidden part of me always dreamed of becoming a writer one day but I was scared. I’m not much of a risk taker but when my boyfriend asked me why I didn’t at least try… “I don’t know,” wasn’t a good enough answer.

Stunned. Recently one of my brothers found out and he just sat there shaking his head in amazement and repeating how cool it was.

Well, I also work full time so at the end of the day if I’m not writing, working or sleeping, I’m probably out hiking with my dog. I love just being outside.

I have a blog… http://www.creewalker.wordpress.com There they can find a list of my published books as well as the buy links. I have weekly updates, excerpts of published works as well as works in progress and any news pertaining to reviews and upcoming releases.


Post a comment and your name will be entered into Cree's blog tour contest to win a Maple Lane Manor tote bag.

Maple Lane returns to the retirement home where she grew up, after ten years away, and must face the music. How can she rebuild the dilapidated building, repay a massive mortgage, and restore her residents’ faith in her with her arch-nemesis – Stacy Three Names – breathing down her neck, hungry for an artifact said to grant immortality? As Stacy sabotages Maple’s efforts, the gorgeous new handyman Derek complicates matters with his demon blood and hot attraction.
How can Maple and her residents fight Stacy, find the artifact, and save their home with the rich and powerful of the town arrayed against them?
…And can she trust a demon to help her?
If you love paranormal books, then this one is perfect.
~ Linda Tonis, Paranormal Romance Guild

A comical paranormal story with a hint of romance for good measure.
~ Author Abby Hayes

What I like…
Red
Maple Lane Manor, Home for Retired Supernaturals
Hanging out with Corey and Titan
Memoirs of a Geisha
Molly Harper
Favorite Saying, Reality TV kills brain cells faster than crystal meth.
Autumn time
Football
Dogs
Jack Coon
Things I dislike,
Reality Television
The words, I can’t
Skinny jeans on adult men
Books or movies with talking animals unless it’s a cartoon…don’t ask me why
Hard Candy
Dusting
The fact the pretty much anything that’s ever been FDA approved can give you cancer.
blatantly rude people
People who hate other people based on physical appearance, sexuality or creed.
Dieting

How fun--thanks for sharing, Cree!