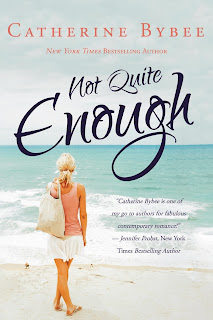 Behind the Scenes of Not Quit Enough

I have lived in Southern California for over twenty-five years. I’ve had my fair share of earthquakes that have bumped me out of bed, and some that had me running for cover. Add to that the years of working in the ER and watching my share of tragedy…and then add to that the stories the doctors, nurses, and firemen would come back with after helping with a relief effort after floods, hurricanes, tsunamis… the setting for this book worked really well for me. It’s been years since I visited Jamaica, but I remember some of the impoverished towns and the kind people I met when I was there.

So the stage was set for this book, now all I needed was two unassuming characters who are not looking for love to find it in the most unusual place and time. Enter Trent and Monica. Both of them have reservations about love and relationships yet neither of them can deny the sparks between them.

Throw all that in a pot, give it a good stir or in the case of this book, lift it into the sky with a helicopter, and you’ve got yourself a killer idea for a love story. That’s what I think in any event.


New York Times & USA Today bestselling author Catherine Bybee was raised in Washington State, but after graduating high school, she moved to Southern California in hopes of becoming a movie star. After growing bored with waiting tables, she returned to school and became a registered nurse, spending most of her career in urban emergency rooms. She now writes full-time and has penned novels Wife by Wednesday, Married by Monday, and Not Quite Dating. Bybee lives with her husband and two teenage sons in Southern California.

Monica Mann has made it her life’s work to save lives. After an earthquake and tsunami hit the shores of Jamaica, she volunteers her trauma skills with Borderless Nurses. Calculating and methodical, Monica creates order out of whatever chaos she finds.

Until she finds the perpetually barefoot, impossibly masculine Trent Fairchild. No one can pin him down. No, really. He’s a pilot and manages a small fleet of choppers on his adopted island home. Hopelessly drawn to one another, they manage to slip away from the wreckage to get a little closer. And they get a lot closer than expected when aftershocks from the earthquake trap them in their own life-or-death scenario. Paradise has brought them together. Now will it tear them apart?

I just got your book in my Amazon order...can't wait to read it

Always love your books, and I can't wait to read this one..

You're a new author to me. Thanks for blogging (as how else would I hear about you?).