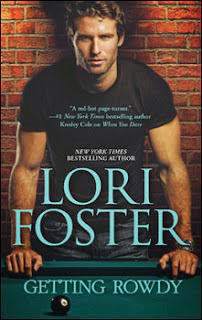 After spending most of his life protecting his sister, Pepper, then watching her settle down with a cop (see Logan and Pepper’s tale in RUN THE RISK), Rowdy Yates purchased a bar, yet he’s still feeling restless. His business is booming, especially due to the topnotch bartender he hired, Avery Mullins, but he can’t stop thinking about her. Of course, the fact that women come into the bar in hopes of a sexual fling with him only enhances his womanizer image.

Avery is determined to not be another notch on Rowdy’s proverbial bedpost. She also doesn’t want to get too close to him for fear that he will discover her secret, one that she prefers to keep deeply buried. But when Rowdy is injured one night while taking her home and he’s attacked by some thugs, Avery repays him by taking care of him, which includes spending the night with him at his apartment. Rowdy makes it clear to Avery that he wants her—and he plans to act upon it as soon as he is able to. And now Avery can’t wait for that to happen…

Yet, becoming closer means both Rowdy and Avery need to open up about their pasts—his being on the run while protecting his sister, and hers from an incident that left her afraid to even go home. After a figure from her past comes back to haunt her, leaving her feeling vulnerable, Avery is going to have to trust Rowdy to help her. If she doesn’t, her life may be in danger. Rowdy’s raw sexuality scares Avery at first, but soon she’s ready to meet him head on. Before long, their scorching attraction begins to feel a lot like love…and they might be able to think about a future if Rowdy can get rid of the threat against Avery.

Readers first met Rowdy in RUN THE RISK as the gallant renegade who would do anything to protect his sister from the bad guys who were after them and the cops determined to find her. With the threat gone, Rowdy’s life has moved on, including his buying a bar and renaming it Getting Rowdy, which just might define the way women seem to flock to the sexy bar owner. Avery pretends she’s not interested, but after Rowdy’s protective instincts kick in, the two grow closer. She resists at first—but soon can’t deny there is a serious case of sexual attraction between them. He has to pull the truth out of her, as she doesn’t want to get him in danger, yet by not telling Rowdy everything she just may endanger his life.

Lori Foster’s recent books have featured human trafficking, but in GETTING ROWDY the tale centers on the peril against Avery and Rowdy’s aim to stop the threat. Their chemistry sizzles right from the start in GETTING ROWDY as Avery catches Rowdy in a compromising position. Her interruption makes Rowdy even hornier…for Avery. Can he become a one-woman man if he wins her trust—and affections? Can there be any future for them if Avery has to continue to look over her shoulder for the rest of her life? Action packed and steamy, GETTING ROWDY sizzles with heat and soul as readers will enjoy Rowdy with his vigilante actions and Avery with her stand tough attitude.

It’s the smoking hot sex that finally brings together Rowdy and Avery, but add in some riveting suspense and readers will be unable to put down GETTING ROWDY.


Learn more about Lori and her books by visiting  http://lorifoster.com/

I definitely want to read it after that great review.

Great peek. Would love to read it. I do like Lori's books.

would love a chance to read this, the review made it sound pretty good :)

I would love to GET ROWDY. Couldn't resist. Count me in.
Thanks.

Getting Rowdy sounds awesome. Love the cover. Thanks for the giveaway.

I love Lori's books! Thanks for the review, can't wait to read Rowdy's story!

Looking forward to reading this one! Thanks for the giveaway!

Would love to read this book. Thanks for the contest.
Patty B Coral

I'm a huge fan of Lori Foster, love reading all her books. Rowdy's definitely on my TBR list, can't wait to get a copy :) Thanks for the chance to win!!

I love Lori's books and can't wait to read this one too.

Hot cover! Thanks for a fabulous review and for putting this book on my radar. Gotta love Lori Foster!