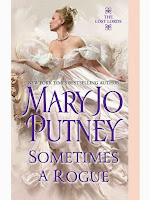 The very pregnant Mariah, Duchess of Ashton woke up feeling restless this morning, so she talked her twin sister Sarah into going for a dawn carriage ride. The two ladies and their driver make it up a hill to an old church. From inside, they hear a group of men planning to kidnap the duchess. Sarah hides Mariah and claims to be the duchess. Once the villains are gone with Sarah, the Ashton driver is able to get away to fetch the help Mariah needs.

Rob Carmichael, estranged from his noble family, is a Bow Street Runner noted for his uncanny ability to find and return treasures, be they goods or young maidens. On this fateful day, he happens to be in the neighborhood and planning to avail himself of his old school friend Ashton's open invitation. When Rob arrives at Ralston Abbey, he finds chaos. The duchess is in labor, and her sister has been spirited away. Before long he rides away on a fresh horse to find and bring Sarah home.

Two things will seem obvious to discerning readers: Rob will eventually find and free Sarah, though not without effort and dangers. (And much surprise on his part. Miss Sarah Clarke-Townsend may look like a tiny golden chick, but she has the heart of a lion.) Thus far SOMETIMES A ROGUE is already a stirring and very suspenseful story, but there is much more to come, and that takes us to the second thing alert readers will note.

SOMETIMES A ROGUE is the fifth in a series about lost lords . Surely that must refer to Rob also…and it does. Rob and Sarah are literally washed ashore into the last place he wishes to be, the place he grew up. However, he learns his father and brother are dead (good riddance!) and that he is the new Earl of Killington. As such, he faces the enmity of his fierce grandmother, a depleted purse, and several run-down estates.

The heroes of this series were lucky to be educated at Westerfield Academy, which is run by a forward thinking lady. It has been dubbed a school for bad boys of good family , but Lady Agnes is capable of turning boys around. And six of them are friends for life. In this fifth Lost Lords tale, we meet many of the people from the past, one of them the lost lord of the next novel, NOT QUITE A WIFE, coming in May.

Mary Jo Putney writes stories that will grip you and stay with you long after you turn the last page! Her plots are never simple, and the heroes and heroines are complex but honorable with lively personalities and wit, as well as good hearts. Ms. Putney plumbs their depths until we know them well, and she puts them into varied predicaments that call on all their talents, even ones they don't know they have. (Can you tell she's one of my favorite authors?)