Q & A with Melissa Bourbon Ramirez! 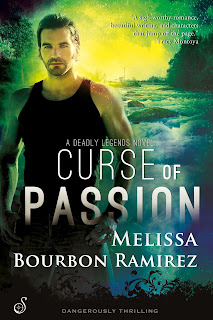 Curse of Passion is the story of Johanna Rios, who’s been haunted by the legend of la Llorona her entire life.  Here’s the blurb:

The ghost of la Llorona is said to haunt the riverbanks, always searching for her drowned child. She also haunts high school teacher Johanna Rios, whose own mother believed so deeply in the legend she tried to drown her daughters. And now the ghost has become real, a young woman murdered, and the safe world Jo created is falling apart.

Since returning home from his last tour of duty to become a school principal, Ray Vargas has fought his attraction for his employee, the sensual woman who’d once been the girl next door. But the Llorona Killer will not stop until he claims his final victim—Johanna—and Ray will do anything to protect the woman he’s come to love.

With a serial killer out to prove the curse is real, will Ray and Johanna’s future be drowned in the ghostly waters of the past? Or will the power of their love give them the strength to stop a killer...and heal their wounded hearts...?

I think the most interesting thing was that the story of la Llorona, which is the Mexican legend at the core of Curse of Passion, has four different versions.  I had no idea this was the case, nor did my husband who grew up with the story.  I was fascinated by the different versions and that became a key element in the book.

I’ve been writing seriously now for about 10 years.  Before that I taught middle and high school English/Language Arts.  I’m lucky enough to be fully immersed in the publishing world now, which I love.

I joined a writing organization ten years ago and met people with whom I began critiquing.  Since then, I’ve moved to Texas and have a new critique group.  Those people have all been instrumental in my success through their support.  Wendy Lyn Watson, Marty Tidwell (Molly Cannon), Kym Roberts, Tracy Ward… these are just a few of the people who continue to support me and I’ll always be grateful to them.  My family, of course, has always been instrumental and I couldn’t do any of what I do without them.

They love it!  They think I’m on the computer way too much, but my kids think it’s very cool that I followed my dream and am a successful writer.

The fourth book in my bestselling cozy mystery series, A Magical Dressmaking mystery, A Custom-Fit Crime, came out in July.  A Killing Notion comes out this winter.  Right now I’m working on the 6th book in this series, Grave Designs, which will be out in 2014.  I’m also developing another series for my editor.

Melissa Bourbon, who sometimes answers to her Latina-by-marriage name Misa Ramirez, gave up teaching middle and high school kids in Northern California to write full-time amidst horses and Longhorns in North Texas.  She fantasizes about spending summers writing in quaint, cozy locales, has a love/hate relationship with yoga and chocolate, is devoted to her family, and can’t believe she’s lucky enough to be living the life of her dreams.
She is the founder of Books on the House, the co-founder of The Naked Hero, and is the author of the Lola Cruz Mystery series with St. Martin’s Minotaur and Entangled Publishing, and A Magical Dressmaking Mystery series with NAL.  She also has two romantic suspense novels, and is the co-author of The Tricked-out Toolbox, all to be released in 2012/2013.