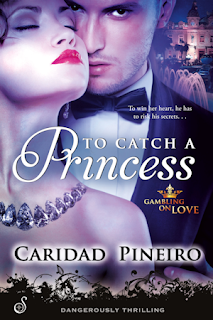 1. In To Catch a Princess you draw the reader into the lives of modern day Royals who battle age-old
traditions. What made you tackle the topic of arranged marriages?

I think that we are so free today to do as we wish, especially when it comes to marriage, that it’s hard to imagine being told who you will marry and going along with it. Tatiana has grown up with some of those Old World restrictions on her life, but has been trying to move away from them and be her own woman. It’s a big part of the reason why she and her brother Alexander live in the United States: for freedom. So I wanted her to be forced to battle for that freedom she wants so badly to show that she is strong enough to buck tradition and follow her own path. I try to show women in positive roles like that so that if there is someone who thinks she is not free to do what she wants, she may draw strength from the story I write and decide to follow her own way.

Purchase on Amazon
2. There have been several high profile jewelry heists in Europe, did these modern day thieves inspire your story?

I did do research into the jewelry heists before I wrote the story and was amazed at how many were unsolved and one in particular where they still had no idea how the theft had been done (although they suspected it might have been an inside job!). It was amazing to see a series of heists that happened right around the time that the story was released!

3. What inspired you to bring the Royals to America?

Why not write the story in a European setting? My original goal in bringing the Royals to the U.S. was to allow them more freedom to choose their own lives and to also avoid the paparazzi and how crazy they can be in Europe. That was especially true for Peter’s story line since his family had suffered the most because of gossips and tabloids. But since the first book was in Atlantic City, I wanted a change of pace for the second and I wanted an over-the-top glamorous setting as the backdrop for Tatiana’s and Peter’s story. Plus, I wanted to add the pressure of not only the heist, but the constant attention of the press. Because of that, I chose Monaco as the main location for TO CATCH A PRINCESS. In the third book, the story will return to Atlantic City.

4. Who inspired your character Peter Roman as the hero in To Catch a Princess?

There wasn’t really any inspiration, but if I had to choose someone, it might be Princess Diana and the many issues she faced with the press and sadly, her death because of the paparazzi. Although Peter’s story is very different, ultimately his family was affected by the attention that his mother was unable to face and Peter has to deal with whether he could handle that kind of scrutiny if he got involved with Tatiana.

5. On a personal note, who's your favorite modern day Royal and why?

That’s a tough one! My mom and I got up at an insane hour to watch Charles and Di get married and my daughter and I repeated that craziness by recording Kate and William’s wedding and having our own special High Tea to celebrate. So, I’d have to say that right now, it’s Kate and Will, although Prince Harry is a cutie. 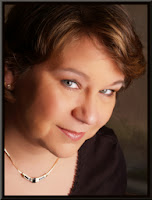 New York Times and USA Today bestselling paranormal and romantic suspense author Caridad Pineiro wrote her first novel in the fifth grade when her teacher assigned a project – to write a book for a class lending library. Bitten by the writing bug, Caridad continued with her passion for the written word and in 1999, Caridad’s first novel was released. Over a decade later, Caridad is the author of more than thirty published novels and novellas. When not writing, Caridad is an attorney, wife and mother to an aspiring writer and fashionista.

Thank you so much for letting me visit with you! I appreciate it.