Q & A with Susan Mallery...plus a contest to win a prize! 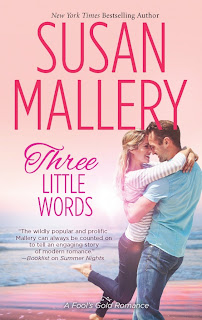 1.      Three Little Words and the previous books in this series, Just One Kiss, and Two of a Kind were instant bestsellers. What do you think it is about these stories that make them such a hit with your readers?
I’ve been very honored by reader reaction to the Fool’s Gold romances. Every Fool’s Gold paperback has debuted on the New York Times and the USA Today bestsellers list, almost all of them in the top 10, and sales just keep getting better and better as more readers discover the quirky small town. Just One Kiss has received over 1,100 ratings on Goodreads with an average of 4.06 out of 5. Two of a Kind has received almost 800 ratings, with an average of 4.21 out of 5. I’m writing this prior to the release of Three Little Words, but early reviews look pretty spectacular. 153 ratings with an average of 4.3.
Readers love that the Fool’s Gold books are more than just the romance (not that there’s anything “just” about falling in love!) They love the strong sense of community. They come to know the people in town, and they love catching up with them with each new book. They get to see who got married, who had babies. As women, we need to feel connected to something larger than ourselves, and the Fool’s Gold books provide that. They go beyond the happily ever after.
Plus, the sex is pretty hot! (wink, wink)
Even if you haven’t read any of the other Fool’s Gold books, you can jump in and start with Three Little Words without feeling lost or confused. I have a free excerpt available on my website, plus a $1.00 off coupon (expires August 9): http://www.susanmallery.com/excerpt_august2013.php
2.      What do you think it is about the heroine in Three Little Words, Isabel,  that women find so relatable?
When Isabel was 14, she had a passionate crush on her older sister’s boyfriend. Then her sister broke up with Ford, and he left town to join the Navy. Isabel wrote to him for years, confessing her deepest feelings, telling him more than any man should know about a woman who isn’t his wife. She stopped writing to him when she got married. Three Little Words takes place years later, and they’re both back in Fool’s Gold, both single. I think readers relate to Isabel’s almost comical feelings of mortification. Here’s this sexy guy – even sexier than he was back then – and he knows not only when she lost her virginity, but where and with whom. Can you imagine running into him in town and having to pretend that you didn’t tell him all those embarrassing things when you were young? Wouldn’t you always wonder what he was thinking about when he looked at you?
Isabel is ambitious, too, which I love. She’s back in Fool’s Gold to help her parents sell the family business, a bridal salon. She plans to use her share of the proceeds to open a high-end boutique in New York City. Love has a way of changing your plans!
3.      Where did you get the inspiration for the town of Fool’s Gold, California? Is it based on a real place?
Fool’s Gold isn’t based on a real place, though I grew up in California and have visited many charming Gold Country towns. The truth is, my good friend Debbie Macomber inspired the Fool’s Gold series. You know she’s brilliant, right? One day, Debbie advised me to stop writing trilogies about families, and to write about a town instead, a place. That way, the series could continue past three or four books. It’s the best writing advice I’ve ever received, and I’ll always be grateful.
4.      In this new Fool’s Gold trilogy, what inspired you to make the heroes bodyguards? Of the three men, which was your favorite to write?
Each year, I come up with a different hook to keep things fresh and fun. This year, a group of military buddies decide to open an elite defense academy on the outskirts of Fool’s Gold, which the locals refer to as a “bodyguard school.” The women in town are pretty excited about the prospect of all that testosterone!
What inspired the bodyguards? Okay, this is a little embarrassing to admit, but we’re all friends here, right? There’s a gym across the street from my building. It’s a manly-man gym, where guys go to sweat and swear. They’re not there to show off, they’re there to work out. One day, there were five guys pumping iron in the window, muscles glistening in the rare Seattle sunlight. They were very… inspirational. Even more so the second time, after I circled the block.
The books were a lot of fun to write. I’d have to say Ford Hendrix, the hero of THREE LITTLE WORDS, is my favorite of the bodyguards. He’s a Navy SEAL, and the things he’s seen and done have changed him. When he moves back to Fool’s Gold, he’s not sure he’ll fit in anymore in the town where he grew up, especially with a matchmaking mother determined to see him fall in love with a local girl. At heart, Ford is a good guy. He doesn’t want to get married, but he doesn’t want to hurt his mother’s feelings, either. So he decides he needs a fake girlfriend for a couple months, just to give his mom time to calm down and back off a bit. Isabel is perfect. She’s adorable, fun, and she’s planning to leave town after she sells her family’s bridal boutique.
5.      In any way, are your female heroines an extension of yourself?
All of my heroines are women I’d want as friends – after all, I spend months with them in my head, so I have to like them – but they are not me. I write four or five books every year, and it would get pretty boring to write about the same woman over and over again. But I certainly do relate to each of them, and if I’ve done my job, readers will, as well.

Susan Mallery is giving away a fabulous prize to one lucky winner as part of her blog tour.
The Susan Mallery Foolproof Bridal Kit includes:

Winner will be announced later in the week.

Can first love turn into the real deal?

Isabel Beebe thinks she’s cursed in the romance department. Her teenage crush, Ford Hendrix, ignored all her letters. Her husband left her for another…man. So Isabel has come home to dust off her passion for fashion and run the family bridal shop until her parents are ready to sell it. Then she’ll pursue her real dreams. At least, that’s the plan, until sexy, charming Ford returns and leaves her feeling fourteen all over again….

Seeing Isabel all grown up hits bodyguard trainer Ford like a sucker punch. Back when heartbreak made him join the military, her sweet letters kept him sane. Now he can’t take his eyes—or his lips—off her. The man who gave up on love has a reason to stay in Fool’s Gold forever—if three little words can convince Isabel to do the same….


#####
Be sure to follow Susan's Three Little Words blog tour:

I finished reading TO LOVE AND PROTECT last night; loved it; the story whipped right by because I was turning pages so quickly; was on the edge of my seat waiting for the conclusion. Thank you!

I enjoyed SWEET SPOT, SWEET TROUBLE, and THE SASSY ONE trilogy (and have read them twice so far), so I'm REALLY looking forward to reading LOTS more Susan Mallery books. Thank you again!
6:11 AM

CrystalGB said…
Three Little Words sounds wonderful. I love the cover. I am a big fan of Ms. Mallery's books.
6:20 AM

Maureen said…
It looks like another great story by Susan Mallery.
6:26 AM

Fedora said…
How fun! I'm behind with Ms. Mallery's books--looks like some fun ahead to get caught up :D
7:15 AM

Kathleen O said…
I always love reading about Fool's Gold and all it's quirky inhabitants.
10:09 AM

LSUReader said…
Thanks for an interesting post and great contest.
11:12 AM

Jane said…
Congrats to Susan on the new release. I love the Fool's Gold books.
11:30 AM

Martha Lawson said…
I really want to read this one, it sounds really great! Thanks for this awesome giveaway.
8:22 PM

Laurie G said…
I started reading Susan's sheikh books back in the early 90's. I've started her Fool's Gold series, recently purchased JUST ONE KISS. I enjoyed her family winery series and the family bakery series too.
4:50 AM

Kristy said…
I've already read this one and loved it! Can't wait to read Noelle's story when it's released!
9:09 PM