Q & A with Kevin Symmons! 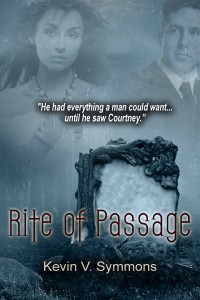 1. Tell us about your latest release:

Rite of Passage, a paranormal romantic thriller has been on the street for several months. Published by the award-winning Wild Rose Press in New York, it’s done very well since its release.
It has garnered dozens of four and five star reviews and was a finalist for this year’s RomCon Reader’s Crown Award (paranormal category). It describes the relationship between Courtney Wellington, the embodiment of 1000 year-old Goddess and Robert McGregor, a Harvard Law student. It is set in 1947 in locales in New England and the British Isles. Robert meets Courtney at a reunion, unaware of the fact that he has been chosen by her powerful Wiccan family to join with her on the night of the summer solstice. Their union will keep mankind safe from the horrors that have befallen it since the beginning of the 20th Century. Without giving away too many surprises and plot twists, it is both a passionate romance and an edge of your seat thriller!

I wanted to be rich and famous

Actually many of the things I have incorporated into my novels. Reading of course… anything and everything I can find. I LOVE history! I have been around boats and the water since my infancy. We have a cruiser, live on the water on Cape Cod, and spend many hours enjoying Nantucket Sound and the exquisite scenery that surrounds us. Also love music… studied at New England Conservatory and also have a minor in music. I have been a professional musician and still am active, singing, and playing piano and guitar. Also love listening to all types of music from opera to rock. Favorite group all time: the Eagles… no doubt. Love a variety of physical activities, puttering around the yard, and more than anything spending time with my family and great friends!

4. What is a typical writing day like for you?

As I mentioned earlier I have several writing related activities (teaching and the Writers Center) which take up time during my days. I also enjoy meeting readers and doing events. My writing days are really writing nights—not by accident. I am nocturnal by nature so my writing usually begins early to mid-evening and lasts till the early morning (~2 a.m.). The demands of social media (FB, twitter, website, blogging, publicity, promotion, etc) can take up an hour, sometimes many more during my days. I have to confess… I love my job!

I mentioned earlier that my writing is generally done into the wee hours. And I also mentioned my lifelong love of music so I generally listen to music on my TV music channels or my IPod when I’m writing. I write commercial fiction… lots of intrigue and romance, so I pick something that will help put me in the mood. Other than that… do I write in the bathtub or lying on the lawn? No. I have been known to take my laptop to my boat and sit on the river communing with nature while I let the ideas and the breeze wash over me!

I told you that Out of the Storm, my latest will be out this fall. It’s a contemporary romantic thriller set on Cape Cod. It center’s around Eric Montgomery, an Iraq war hero who resigns his commission to come home and marry his high-school sweetheart. When she and their unborn child die in a tragic accident he loses himself in drink and self-pity. Suddenly a young woman he’s met only once and her daughter arrive at his home one stormy night. Is this mysterious and unexpected arrival the answer to a prayer, the beginning of a new life… or another nightmare? Plot twists and duplicitous characters abound. The answer’s are in the novel!

Voices, a complex women’s fiction work that deals with a beautiful young singer trying to escape the privation and tragedy of her past. Jessie (my heroine) is faced with a life-changing decision. Will she chose the right path. Tag line (credit Oscar Wilde) “When the gods want to punish us they let or dreams come true!”  Should be out next year. I have been tweaking it for a long time and it may be my favorite to date!

Several other projects include Chrysalis, a contemporary NA novel about two talented young people whose magical relationship seems star-crossed, and I have begun research on an historical. Something I always wanted to write. With a working title of “A Line in the Sand” this one is a romance set against the backdrop of the Battle of the Alamo in 1836 San Antonio, Texas!

As you can tell I love to do more than one thing!

I love to connect with readers. Please check out my website @ www.ksymmons.com , which contains my blog, FB page @ https://www.facebook.com/kevinsymmonswriter?ref=ts,  my twitter feed @kevinsymmons, and on my Amazon or Goodreads author pages.