Guest Blogger: Kat Martin on The World of Art

The intriguing world of art is the setting for my newest book, AGAINST THE MARK.  When private investigator Tyler Brodie agrees to help hot little blond, Haley Warren, find out the truth about her father’s death, he doesn’t realize the danger he and Haley are going to find themselves in.   After all, tens of millions of dollars worth of stolen art is plenty of motive for murder.

Art is a world I know something about.  In the mid-nineteen eighties, my husband and I owned a gallery called Wildfire.  The gallery specialized in Western art, from impressionist landscapes, to more realistic pieces: scenes of ranch life, cattle drives, winter in the mountains or any of a dozen other western subjects.

We didn’t handle hundred million dollar Rembrandt’s but we visited dozens of galleries all over the world and got to see paintings by all sorts of different artists. 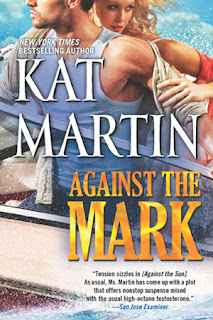 As with everything a writer experiences, the knowledge I gained was invaluable in writing AGAINST THE MARK.  In the book, Ty Brodie’s investigation leads him to the discovery of the theft of millions of dollars worth of valuable art.

Was Haley’s late father involved?  Or before he died, was he about to make the same discovery Ty and Haley have made--a discovery that might get them killed.

I loved writing this book.  In the story, Haley is the child of a broken home, a young woman who doesn’t believe in romance, marriage, or happy endings.

But Ty is a hard man to resist.  Carefree and fun-loving on the surface, Ty is ex-military, a man who knows how to handle himself in a tough situation.  A man nearly irresistible to women.  Ty wants Haley, and it doesn’t take long for her to realize that she wants him.

But Haley is afraid to risk her heart.  It takes nearly getting killed before Haley realizes love is worth the risk.

I hope you’ll watch for AGAINST THE MARK, the ninth book in my AGAINST Series.  And that next year, you’ll look for Ty’s cousins, the Brodie brothers, starting with sexy, ruggedly handsome Dylan Brodie in AGAINST THE WILD.

Till then happy reading and have a great summer.   Kat

Blurb for AGAINST THE MARK:

The perfect murder is a work of art ...

In one catastrophic instant, Haley Warren's estranged father was taken from her. She never got the chance to reconnect with him, so now she's doing it the only way she's got left: by proving the explosion that killed him was no accident.

When Tyler Brodie, the provocative and handsome P.I. hired by Haley, discovers that her father was investigating a suspected art theft, he knows his death is no coincidence. After all, tens of millions of dollars worth of stolen art could motivate a thief to go to any lengths including getting rid of anyone poking around where they don't belong.

As Haley and Ty get closer to the truth, the truth gets ugly: Did Haley's dad know too much …or was he in on the take? And although Ty's a consummate professional, he's having trouble focusing on the facts of the case, and not the figure of his gorgeous client. The two are determined to get to the bottom of the case, even if it means they die trying.


Excerpt from AGAINST THE MARK:

Excerpt #1
Against the Mark, by Kat Martin
Words 712
“I’ve got another client for you.  Tyler Brodie, I’d like you to meet my grandniece, Haley Warren.  Haley’s out here from Chicago.  Her grandmother was my sister.”
Just to regain a little of his dignity, Ty let his gaze roam over her, starting at the frosted-pink toenails peeking out of strappy high-heeled, open-toed sandals, sliding up a pair of long legs in snug fitting jeans, across that bare midriff with its glittering bellybutton ring over a set of nicely rounded breasts to a pretty face framed by long, softly curling honey blond hair.
She had big blue eyes, and an Angelina Jolie mouth that made him think of dirty sex.  Maybe she read his thoughts for a faint blush rose in her cheeks.
Good.  A little payback only seemed fair.
Besides, she was a real pleasure to look at.  Not beautiful in the classic sense like some of the women he knew, but with those dimples and big blue eyes, she was way beyond cute.
“Nice to meet you, Ms. Warren.”
The smile was gone and she assessed him coolly.  “Aunt Ellie tells me you’re a friend, as well as an investigator.”
“I like to think that’s true.”
“Of course it’s true,” Ellie said.  “That’s why I know we can count on Ty to help us.”
Wariness slid through him.  Ellie had a way of bringing him clients who were nothing but trouble.  “How’s that?”
“Well, you see, three months ago Haley’s father died when his power boat exploded.”
“I’m sorry for your loss,” he said to her.
Grief flashed in her eyes an instant before she glanced away.  “Thank you.”
“At the time everyone thought it was an accident,” Ellie continued, “a gas leak of some kind that turned deadly.  Haley’s stepmother doesn’t believe it.  About a month ago, Betty Jean started emailing Haley, trying to convince her to come to Los Angeles and help her find out the truth.”
Ty focused on the leggy blonde.  “And you think she’s right because...?”
“I don’t know if she’s right or not.  I’ve never met her.  Before he died, my father and I had been estranged for nearly five years, ever since he left my mother and ran off with another woman.”
“Betty Jean,” he said, just to make sure he was getting this straight.
“That’s right.  After he moved to L.A., Dad tried to mend our relationship, but I just...I couldn’t get past his desertion.”  She glanced down and her eyes misted.  “Now my father’s gone.”
Ty nodded, beginning to get the picture.  “So your dad’s dead and you regret not mending your fences.”
“Yes, I do.  Very much.  But the thing is, some of the things Betty Jean says make sense.  I owe it to my father to find out what really happened.”
He flicked a glance at Ellie, whose features looked a little too bland to suit him.  “I take it you’re here to convince me to help her.”
“That’s right.  You know how good you are at these things, Tyler.  Johnnie’s out of town on some case or other.  And Haley will be helping you.  That’ll save you from having to do everything by yourself.”
Haley would be helping him.  He could think of any number of things he’d like her to do for him, but none of them had anything to do with business.  The fact was Haley Warren was Ellie’s niece.  Seducing her probably wasn’t a good idea.
“Have you talked to the police?”
“Betty Jean has,” Haley answered.  “The police said there was nothing to indicate any sort of foul play.  But my stepmother isn’t convinced and if she’s right--“
“I’ll tell you what.  I’ll look into the circumstances of the accident, see if anything looks suspicious.  I’ve got friends in the department.  If something’s not right, I’ll talk to them myself.”
Haley reached over and caught his arm.  He felt a little zing of awareness and figured she must have felt it too since she stepped back as if she’d been burned.
She glanced away, took a deep breath and forced her eyes back to his face.  “I want to be involved in this, Mr. Brodie.  I need to find out for myself.  I owe it to my father to find out the truth.”

With fifty five novels to her credit and more than fifteen million copies of her books in print, Ms. Martin has been published in twenty-one foreign countries including France, Japan, Greece, Argentina, Russia, Sweden, Turkey, China, and Spain.

The Metropolitan Museum of Art is my favorite although I haven't been there for many years. We don't live far from Princeton University but I had no idea until recently what a wonderful museum they had.

Monet. And I have not been to MOMA in awhile either.

Georgia O'Keefe is one of my favorite artists.

We have visited many art museums in our travels. Our favorites have been Rijksmuseum in Amsterdam, the Louvre and the Musee d'Orsay in Paris, and the Metropolitan Museum of Art in NYC.

got some art lovers-- we have some nice art in our house, fairly eclectic. I particularly love western art. fits our montana home and is fun to look at. hope you enjoy Ty and Haley in Against the Mark