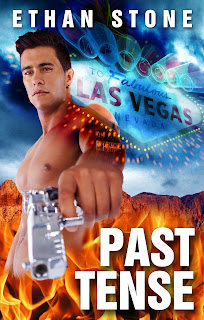 The excerpt is one of my favorites in the book because it’s the first paranormal scene in Past Tense. It’s the introduction to the supernatural world not just for the reader, but also for Jason.

In the earlier parts of the book there are clues that it’s more than just a regular thriller story. Nothing completely obvious, but the clues are there if the readers wanted to find them.

But as far as shock value goes, I like the scene with crocutta. Despite what he saw with his very own eyes, Jason doesn’t want to believe he just had an encounter with an honest to goodness monster. How would you feel in a similar situation?

It’s also the beginning of the second phase of Jason and Quinn’s relationship. It’s one of the last big secrets Quinn keeps from Jason. He can’t fully admit his own feelings while still keeping so many secrets. Until he can admit that he’s a monster hunter he can’t be totally open to Jason.

The scene is also fairly tame compared to some of the other paranormal action later in the book. The crocutta is dispatched fairly easily, but later monsters most definitely are not.

Far from the only surprise in Past Tense, the crocutta is one of my favorites.

Jason Holt was a young man when he lost everything; his family, his boyfriend, and his safety. He’s been on the run since, hiding from an evil man bent on revenge. Las Vegas was supposed to just be another pit stop in his travels but when he learns the very man he’s hiding from is in Sin City Jason decides it’s time to stop hiding.

Private detective Quinn Reynolds lost the man he loved several years ago and since then he has been hiding from life. He can’t move on and is obsessed with making the man responsible for his lover’s death pay for the crime.

When Jason comes to Quinn for help, Quinn finds a reason to move on. The dangerous situation around them quickly escalates and together they face an unimaginable evil. Can they survive the darkness and make it through to the light on the other side?

We rode in silence for a bit while I absorbed the beauty of the trees around and the magnificence of the man I was touching. I felt a connection to Quinn, both sexual and emotional, and I wondered if he felt the same thing.
“We going anywhere in specific?” I asked.
“One of my favorite places,” he replied. “We're almost there.”
We rode into a clearing through which a small creek flowed. He stopped the horse, climbed off and helped me down.
“I need to piss,” he said. “Stay here. I'll be back in a few minutes.”
Nodding, I took the reins of the horse, led him to water, tied the lead around a tree and looked around.
“Come to me.” A voice startled me. I looked around and saw Quinn across the creek. He was shirtless and had his hand outstretched.
“Why are you over there?” I asked.
“Come to me,” he repeated. His voice was different, more neutral than normal.
I laughed. “Quit fucking around, Quinn.”
“Come to me, Jason. I want you.”
“Are you serious?”
“Come to me.”
The situation was weird, but I wanted Quinn so bad I couldn’t turn him down. Somewhere along the line I’d gone from wanting to desire Quinn to actually desiring him. I stepped into the water and crossed the creek. The water was cold, but it didn't stop me.
“Stop!” I heard Quinn call out. The sound didn't come from in front of me, though. It came from behind me. I turned and saw Quinn running to me. Confused, I turned to the Quinn who had been beckoning for, then I turned back to the Quinn behind me just as he reached me.
He grabbed my arm and pulled me back across the creek.
“What the fuck is going on?” I demanded.
“Stay behind me,” he ordered. I looked back to the Quinn across the water, and he opened his mouth wider than humanly possible, baring a dozen long teeth as he did so.
“Jesus motherfucking Christ!” I cried out and fell to the ground.
Quinn pulled a knife from a sheath strapped to his right ankle and threw it in one smooth motion. The knife embedded into the creature Quinn's chest, and it let out a high pitched, bloodcurdling scream that forced me to cover my ears. The creature scratched at his own face, peeling away skin and tissue. All resemblance to Quinn disappeared and its true self became visible. Its skin was a purple-gray color and its eyes were as large as baseballs. Were its eyes always like that or was it an effect of dying? There wasn't a doubt in my mind it was dying, or that it had been intent on killing me.
The creature fell to the ground and lay still and quiet. I uncovered my ears and saw Quinn standing over me in a protective stance, his cell in his hand.
“Kearney, I need you at the creek.” He pressed end call, squatted down and wrapped his arms around my shoulders.
“Jay, are you okay?” I barely registered that he’d used my real name. He rubbed my back, comforting and calming me almost instantly. “Lord, I am so sorry you had to see that.”
“What the hell was that?” I asked as I stood. Quinn didn't pull away from me; in fact he turned me so we faced each other.
“Jason, are you okay?” He cupped my face in his hands. I wasn't sure if the gesture was protective, emotional or both.
“Didn’t you already ask me that?” My ears were ringing loudly.
“Yes, I did and you still haven’t answered. Are you okay?”
“Yeah, I guess. What the fuck was that thing?” He pulled me close and held me instead of answering. I wanted to know what that thing was, but I also liked the security of his arms around me. I stood there just breathing as he protected me. Five minutes later, I was about to ask my question again when I heard the unmistakable sound of four wheelers. Kearney and Lee pulled up, carrying an old two-barreled shotgun and a spear, respectively.
They were off the ATVs in an instant and Kearney was at our side. Lee splashed across the water with the spear in one hand and a gas can in the other. I watched in fascination as Lee took the spear and stabbed it through the creature's brain. I wanted to tell him the thing was dead, but I figured he knew what he was doing. He poured gas on the monster, stepped back, lit a match and threw it. The creature burst into flames. Amazingly, the ear-piercing screaming began again but only for a few seconds. A loud explosion followed and suddenly the noise was gone.
I realized Kearney and Quinn were speaking, and I heard the last of Quinn's sentence.
“...was a crocotta.”
“A cro-what-a?”
“Crocotta,” Kearney answered. “They feed on human souls.”
“Geez, Da,” Quinn interrupted. He looked me in the eyes, and I knew my world was about to change again. “I'll explain...everything. You guys have everything under control?” he asked. “I want to get Jason back to the cabin.”
Kearney nodded. “Take the ATV, we'll come get it tomorrow.”
Quinn took my hand, and we walked to the vehicle. We didn't speak on the ride home, not that it was possible over the noise of the four-wheeler. Even at the cabin, we didn't talk until we were inside and sitting on the couch.
“You okay, Jason?” He ran his fingers through my hair.
“Will you please stop asking me that? And would you please tell me what the fucking hell just happened?”


Ethan Stone has recently returned to Oregon after 12 years in Nevada and is working on re-growing his webbed feet. He has been obsessed with two things in his life: books and all things gay. After spending years trying to ignore the voices in his head, he finally decided to sit down and listen to them. What he discovered was a perfect union of his two obsessions.
Link: https://www.wildecity.com/books/gay-mainstream/past-tense/#.UbEdjJxyXFI

Thank you for having me here.

This title is very appropriate for our recent weather! Would like to read this one.