A Perfect 10: IN THE ARMS OF THE HEIRESS by Maggie Robinson 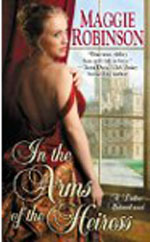 Heiress Louisa Stratton is having to come to terms with her independence, and her visit home to Rosemont for Christmas is the cause. She has written to her Aunt Grace that she met and married the man of her dreams, Maximillian Norwich. There's only one problem; he doesn't exist. And knowing she will have to answer to the exacting questions of the woman who raised her, Louisa is on the hunt for a Maximillian stand-in. She's gone to the Evensong Agency for help. Mrs. Evensong has the reputation of “getting things done", and she finds the man she hopes will be the perfect Max to assist Louisa, and to possibly help him at the same time.

Captain Charles Cooper, veteran of the Boer War, is hardly of Louisa's class, but as a child he was taken under the wing of his father's employer who sent him to Harrow for a good education. Charles is back in England after witnessing firsthand the horrors of war, and he's not handling the memories too well. On the verge of suicide, he's been drinking himself into oblivion, so when Mrs. Evensong appears at his unkempt room, he isn't all that receptive. And then she mentions the money he will make, and Charles thinks of his hardworking older brothers and their families and how he can help them before he does away with himself. The fact that Maximillian is an art expert and Charles certainly isn't, doesn't bother him. It's a thirty day commitment, and Charles is sure he can handle anything for thirty days.

What Charles doesn't plan on is his immediate attraction to the feisty, outgoing and outspoken Louisa. She has been touring the Continent for the past year with her maid, and she's made it very clear that she cherishes her independence and has no interest whatsoever in being tied down to a husband. No one will ever again tell her what to do after growing up in the cruel atmosphere of Rosemont with her domineering, icy cold aunt. Love has not been a part of Louisa's life, and she doesn't expect it to ever come along.

The couple arrives at Rosemont, and within hours Charles is in danger. Who wants him out of the picture? That is, besides Aunt Grace who starts off her interview with him by offering him a bribe to leave the marriage?

IN THE ARMS OF THE HEIRESS is nonstop wonderful! The immediate interaction between Louisa and Charles sets the tone for this delightful tale. Humor is a huge part of the story despite the mysterious problems that crop up for Charles. Some discourse is laugh out loud funny, and intimate thoughts of both characters are, at times, hysterical. But both Louisa and Charles have memories they need to control before life goes on, and being at Rosemont hasn't helped Louisa so far, although Charles is coming out of his funk as he begins to understand his "wife" more.

Fast paced, well written, and absolutely terrific well rounded characters make IN THE ARMS OF THE HEIRESS a Perfect 10 for me.