Q & A and giveaway with Ariel Tachna!! 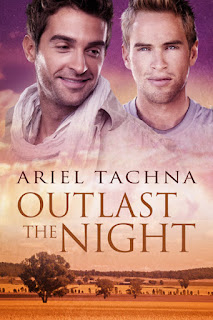 1.      Tell us about your newest release.
My newest release is called Outlast the Night. It’s the third in a series of loosely related books set on Lang Downs, a sheep station in New South Wales, Australia. In this book, we meet Sam and Jeremy, two new characters, although we’ve met their brothers in previous books. Sam comes to live on the station after he loses his job and his wife asks for a divorce. Jeremy comes there after he has a falling out with his homophobic brother, and Lang Downs is the closest place he can go. Neither comes to the station expecting to stay, but they meet each other and suddenly Lang Downs seems a little like paradise.
2.      Can you tell us a little about your favorite scene in the story?
I have two favorite scenes. The first involves Sam rescuing and then adopting the kitten of one of the barn cats that’s been attacked by a hawk. Jeremy helps him take care of the kitten and before long, Jeremy’s dog Arrow has adopted the kitten as well, carrying her around on his back and actually saving her later when the hawk comes back for another try at the cat. It’s a fun, lighthearted scene that breaks some of the tension between Sam and Jeremy.
The other favorite scene involves Kami, the station’s cook, who is an irascible old man who snaps at everyone and then occasionally dispenses nuggets of great wisdom. Kami corners Sam at lunch one day when the other jackaroos are all out at work and starts probing at Sam’s sore spots because Kami’s always been one to lance the wound rather than let it fester. When Sam protests, Kami lays it all out on the table and gives one of the most powerful descriptions of Lang Downs in any of the books: “Michael Lang started taking in strays from the moment he founded this station seventy years ago. Macklin, your brother, me… we’re the latest in a long line of people who came here to lick our wounds and realized this was the Promised Land.”
3.      When did you first realize you wanted to be a writer?

I started writing when I was twelve. I won’t tell you how many years ago that was. I’d written five novels by the time I graduated from high school, although I’m not sure anyone would want to read them. I decided to seriously pursue it as a career about seven years ago.
4.      What is a typical writing day like?
Ideally, I get up, get the kids to school, grab breakfast and tea, and then start writing by around 8:30. I write better in the morning, so I push pretty hard for anywhere from two to four hours, depending on what else I have going on and how cooperative the muses are being. Then it’s a quick lunch and my work for Dreamspinner Press or promotional work for my own books before the kids come home. If I’m lucky, I’ll get a little more done in the evening, but that’s hit or miss. The muses really like the early hours of the day.
5.      Do you have an interesting writing quirk or habit?
Probably the most interesting quirk I have where writing is concerned is that some of my characters are technophobes, and when they are, I can’t write at a computer. I end up having to write longhand and then transcribe the text later. Macklin from Inherit the Sky and Ian, whose story I’m writing now, both refuse to have anything to do with the computer.
6.      What was one of the most surprising things you learned as a published author?
This is going to sound naïve, but how careful you have to be about trusting people. It hasn’t happened to me, fortunately, but I’ve watched friends be taken advantage of by unscrupulous publishers and agents. It’s driven home to me the old adage: If it seems too good to be true, it probably is.
7.      What authors or friends influenced you in helping you become a writer?


As a teenager, the first romance I read was Destiny’s Temptress by Janelle Taylor. I thought it was brilliant! (I haven’t read it again as an adult, so I have no idea if it stands the test of time.) I read it until it fell apart. I also went in at times and studied the way she’d created certain scenes or emotions or tension and tried to use those skills in my own writing. As an aside, I got to meet Janelle Taylor three weeks ago at Romantic Times, and she is as lovely as could be. We spent three wonderful hours discussing writing and publishing, and she was incredibly supportive of me, my career, and my choice to write gay romance.
Beyond that, I was involved with a very active online author community when I started trying to get published, and they gave—and still give—me tons of support. I would never have gotten up the nerve to submit that first book if it weren’t for Connie Bailey, Rhianne Aile, Nicki Bennett, and Madeleine Urban.

8.      What does your family think about your career as a published author?
My husband is a little baffled by my choice of writing interests, but he’s incredibly supportive of my decision to pursue a career as a published author. My kids are young and have no real sense of what I write, but they proudly tell anyone who will listen that I’m a “famous author,” which came from overhearing a story from an event I attended where a fan came up and was all excited to meet me.
9.      Besides writing, what other interests do you have?
I knit and crochet. I love to ride horses, although that’s not something I’ve had a lot of time for recently. I love anything French: books, movies, etc, so I’m always looking for a chance to use my French.
10.  Can you tell us about what’s coming up next for you writing wise?
That’s a bit of a sore spot at the moment. It was supposed to be a book about two waiters in Montréal, Canada, but Pascal and Mathias stopped cooperating, so I switched gears two weeks ago and started working on Conquer the Flames, the fourth Lang Downs book. I’ve got it about halfway done. Thorne and Ian are playing nice with me. Thorne is retired Australian Special Forces, currently working as a volunteer firefighter combatting the grassfires that are burning at the height of a dry Australian summer. Ian is one of the year-round employees at Lang Downs. We’ve gotten glimpses of him in the first three books, but this is his chance to step into the limelight. He’s not happy about that. He’d much rather go back to his quiet house and his private workshop and make more furniture, cabinets, or whatever else, for everyone on the station. Thorne, however, took one look at the valley and then one look at Ian and realized he’d just found everything he’d ever wanted.
11.  How can readers connect with you online?
I’m in lots of places. Of course there’s my web site, http://www.arieltachna.com. I’m also on Facebook, https://www.facebook.com/ArielTachna, and Twitter https://twitter.com/arieltachna, or I can be reached by email, arieltachna at gmail dot com.

Post a comment and leave your email address for a chance to win a copy of Ariel's book!


Ariel Tachna lives outside of Houston with her husband, her daughter and son, and their cat.  Before moving there, she traveled all over the world, having fallen in love with France, where she met her husband, and India, where she hopes to retire some day.  She’s bilingual with snippets of four other languages to her credit and is as in love with languages as she is with writing.

To purchase my books, you can always go to Dreamspinner’s web site, http://www.dreamspinnerpress.com  or you can go to Amazon, Barnes & Noble, All Romance eBooks, Fictionwise, or Rainbow eBooks, http://www.rainbowebooks.com/store/.  I’m sure there are probably other eBook outlets as well, but I don’t go searching for them.  Also, if you want to buy the book in print, any bookstore that allows special orders can order the book for you with the title and my name.

I enjoyed the interviewed and this sounds like a very good book.
sstrode at scrtc dot com