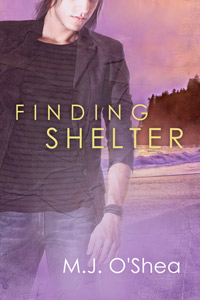 Finding Shelter is my third book set in Rock Bay, a fictional small town on the Washington coast. This one features Logan, who moved to town to live with his best friend and forget the girl who broke his heart, and Justin who's bruised and a little broken and came to Rock Bay looking for a place to heal.

One of my favorite scenes in any of my books is that scene where the tension between the two characters nearly explodes but doesn't quite yet, that one that leaves the readers (hopefully) saying Come ON and kiss already!! In this book, the two of them are playing a teasing game of frisbee on the beach and there's a rather painfully awkward near kiss. I love torturing them!

I think the desire was always there, but it just seemed like something that would never actually happen! Sometimes I still can't believe that I get to do it every day. I wrote for fun and even entered a few writing contests with successful results, but decided somewhere in 2009 to really go for it.

I start writing when I get home from my day job at about three. I work on whatever small bits and pieces need to get done that day, catch up on social networks, and then get going on the writing. I write usually on and off until about midnight. Sometimes even later if I'm really on a roll.

You know, Probably haha. I think one of them is that I hate writing wearing normal shoes. I have to take them off and put on my flip flops in the summer or my uggs in the winter. I can't really relax and get into it unless I get rid of my work clothes and get comfortable.

I think it really was just how many people's work went into a single book coming out. Editors, formatters, artists … a lot of people's hands have to be on the book before it's ready for readers to see.

You know, it's something that I always wanted to do on my own. There are authors that I'd love to say influenced my writing style (but they didn't, I wish!!) Writers like JK Rowling, Dan Brown, Lois Lowry, Neil Gaiman and Orson Scott Card are the ones who made me say 'I want to do this' back when it was just a pipe dream for the future. I'd love to be able to write like any of them someday:)

Haha, they're both proud of me for doing it, but not so happy about the amount of time it takes up. I think the pride dominates most of the time. At least I can hope it does!

Tons! I'm really into music, I've played the piano for years and a few other instruments. I like to paint and draw, I love to dance, I was a swimmer and a rower in high school and college. I could go on forever, haha...

Yes:) I have a book coming out with Dreamspinner Press in early summer called Catch My Breath.

Danny Bright knows he was born to entertain people, he just needs his big break. So when he hears that Blue Horizon records is holding auditions looking for the next big thing, Danny jumps at the chance. It doesn’t turn out exactly as he’d imagined though. Instead of getting a solo contract, Danny is put with four other guys — into a boyband. Elliot Price thinks he’s headed for college. An impulsive decision to sing in the local talent search changes all that. Big wig producer Sasha Pulaski happens to see him, hands him a business card, and turns Elliot’s life upside down.
Elliot and Danny are close from the very beginning. They love all the guys, but it’s different with each other. Soon, their friendship turns into feelings more intense than either one of them can ignore, as much as they know they should. The other three boys only want Danny and Elliot to be happy, but when their management team and record label find out two of their biggest tween heartthrobs are in a relationship with each other, they’re far less than pleased. Danny and Elliot find themselves in the middle of a circle of lies and coverups all with one bottom line — Money. They have to stay strong and stick together if they don’t want to lose themselves…and each other.
I also have a few more in planning for this year with no concrete release date:
Rising Sun, a sci fi sequel to my 2011 title Dark Sun
a paranormal rom-com called A Little Taste of Magic in the same world as A Little Bite of Magic (which will be re-released April 30th),
a contemporary novel in the fall called Newton's Laws of Attraction about teenage sweethearts with a rocky past who find each other again:)

Justin Foster has nineteen years of nothing but trouble behind him. After escaping his abusive father, he finds himself in Rock Bay, Washington, with his cousin Travis. Justin is bruised and has a hard time trusting, but with the help of his family and the small town, he might be able to heal.

Logan O’Brien is also new in town, hoping he can finally get away from his past and the memories of the girlfriend who shattered his heart. It doesn’t take him long to realize Rock Bay can be more than safe harbor: it can also be home. And for the first time in his life, he finds himself captivated by a man—by Justin.

Justin is attracted to Logan too, but he’s also wary. Physically, Logan reminds him a bit too much of the closeted jerks who used to beat him up after school. But after one awkwardly amazing kiss, he’s smitten, despite how his past and insecurities continue to haunt him. Logan’s love, faith, and stubbornness are just what Justin needs to believe their love is worth fighting for.