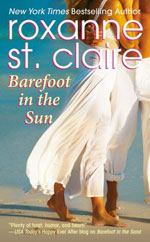 Zoe Tamarin's best friends, Lacey, Jocelyn, and Tessa, no doubt see her as fun loving and carefree, but they don't know that in reality she's scared and ready to run whenever the truth is about to be revealed. Zoe is poised to run again when a man from her past, Dr. Oliver Bradbury, shows up unexpectedly at a function she's attending. During the ensuing madness after he delivers Lacey's baby, who decides to make its appearance, Zoe and Oliver didn't talk. But now she's made her way to his medical practice, pushing away her fears, because she has something she needs from him. Her Great-Aunt Pasha has untreated cancer, and she wants Oliver to take Pasha on as a patient—without asking for personal identifying information.

Of course, Oliver has a ton of questions. He moved to Florida after his divorce to start over, though he didn't expect he'd have his son, Evan, living with him for the summer while the ex tromps off on an adventure with her new boyfriend. Oliver is stunned to come face to face with Zoe again, especially after her mysterious disappearance nine years ago, just as he was about to propose to her and she'd revealed that her real name wasn't Zoe and that Pasha had kidnapped her—willingly—and that they were on the run still, despite Zoe now being an adult. Now she's living in Barefoot Bay and needs his assistance. Pasha can't get regular medical assistance because the first thing they'd ask for is her identification; she has fake ID and if her DNA is tested, the authorities might be alerted. Oliver balks at first, but there's no denying he still has feelings for Zoe. Yet will the old hurts come back to haunt them both, or will they get the time to heal their wounds?

Zoe never forgot Oliver—he was the one man she's ever loved, but when she revealed the truth about her past, he couldn't promise Pasha's safety and anonymity. Zoe is grateful to Pasha for saving her from a hideous foster parent and protecting her as the two began a life on the run. Now it's Zoe's turn to save and protect Pasha, but is it too late? Oliver is part of a clinic that is using groundbreaking methods to fight cancer, but could he be breaking the law if he takes on a patient who refuses to reveal possibly incriminating identification? Yet Oliver finds he can't say no to Zoe, though he counteroffers her request by asking her to watch his son while he works. Evan is a cute, adorable boy with an IQ to rival Einstein, and just like his father, he's attracted to Zoe. But Oliver's attraction to Zoe is of the grownup variety, and there's no denying the chemistry between the two.

Zoe is torn between keeping Pasha safe and falling for Oliver again. She felt he once rejected her when she told him parts of her past, and she's now determined to keep things between them strictly businesslike. For Oliver, his son comes first, and getting stuck in the middle of Pasha and Zoe's murky pasts could hurt his son and his medical integrity. But as Zoe and Oliver are thrown together, neither can deny the sizzling passion that soon has them unable to resist each other. Zoe quickly realizes that she is going to have to tell Oliver and her best friends the whole truth, but will the revelation bring up more questions than answers, especially about Pasha's role in it all?

BAREFOOT IN THE SUN is a compelling tale that sucks in readers with its emotional conflict of Zoe's past, including that of her beloved Pasha, and the smoking hot chemistry between Oliver and Zoe. Secrets are never gone, only simmering below the surface, and this proves true in BAREFOOT IN THE SUN. It's a romance that readers will adore from the talented pen of Roxanne St. Claire and one I highly recommend. With the poignancy of Pasha's cancer to the rekindled romance of Oliver and Zoe, all wrapped around the secrets of the past, BAREFOOT IN THE SUN delivers a topnotch tale and deserves a Perfect 10 from Romance Reviews Today.