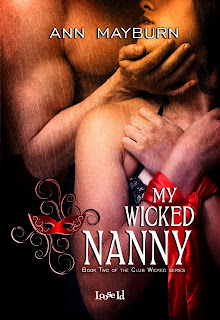 My Wicked Nanny, book 2 in my Club Wicked series, is a fun and steamy story that plays with one of my favorite tropes, the older man/younger woman and boss/employee stories. You know, that fun and forbidden love between two people that shouldn’t be attracted to each other, but are helpless to resist. In My Wicked Nanny we get to meet Jesse, a widowed father of two young boys, and Anya, his young nanny. Anya gets a part time job at Club Wicked, an exclusive BDSM club outside of Washington DC, as a server, not knowing that her boss is also a member of the club. When she runs into him while working at Wicked, wearing a mask and scandalous outfit that is her work uniform, she is torn between throwing herself into his arms and running the other way as fast as she can.

How much the people in my head run the show. :P I had a nice story all planned out in my head, then I started writing it and the characters immediately did a 360 and demanded something entirely different than what I’d originally planned. Oh, and the things they wanted to do were much kinker than I’d envisioned. Like go call a priest and schedule a confession kinky. ;)

How long have you been writing?

I’ve been writing for almost two years now. :)  My two year anniversary is coming up in May and it seems like I’ve been both doing this forever and just started. Weird, I know.

My greatest influence had to come from author Kim Harrison. I read an interview/article about her Hollows series where she said that the idea for the story came to her when she decided to group together the weirdest characters and storyline she could think of, then made them work. Reading that opened my mind to the possibility that well, really anything is possible as long as you can make it work. That freed me to let my muse do whatever the hell she wanted with a story and somehow, I’d make it work.

Thankfully they support me 100%, especially my husband and I love him to bits for it. My mom has been a labor and delivery nurse for 30+ years, so she is pretty open about sex and sexuality. She likes to joke that the other nurses and midwives she works with are an earthy bunch, and they often share tales that would make my ears turn red. That said, I never, ever want to know that my mom or my brothers read one of my erotica works. Why? Uh, ‘cause she’s my mom and they’re my brothers. That would just weird me out.  My sisters have read my books and I love them for their willingness to try new things.

I’m a super crafty type person so I’m always finding something new to make. My current hobby of the hour is making glass tile pendants with my book covers on them. I plan on giving them out at the conferences I’m attending this year (AAD, RT, Romanticon) and sending them out in swag bags to my Street Team. You can see an example of them here: http://pinterest.com/pin/83949980525970793/
How can readers connect with you online?