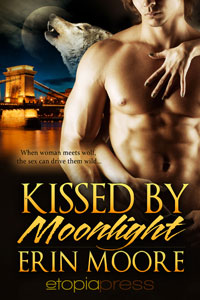 Why do we like werewolves in our romance novels?  It’s undeniable that werewolves sell; see Christine Warren’s The Others series, Kelly Armstrong’s Bitten, Nalini Singh’s Changeling/Psy series, to name just a few.

Yet it is seemingly incongruous to have a werewolf – what was once regarded as a fearsome, non-sentient monster of the darkest imaginations – as the love interest in a romance.  No longer relegated to the shadows, our werewolves now take center stage as hero (and heroine) in many paranormal romances.

So what does this say about the times we live in that we view a monstrous beast as a familiar and sympathetic character, worthy of not only our compassion, but our love?

In order to answer that, first, a little history:

As most of us werewolf lovers already know, the lycanthrope was the subject of nightmares for most of history, with its first appearances in written literature occurring in classical Greek mythology.  Lycaon’s transformation into a wolf was retribution for offering his son as a meal to Zeus.  Other werewolves in poetry and song also represented the idea of the werewolf as something to be feared – much like witches.  With the major exception of the Breton/French story of Bisclavret, (memorialized in written form from oral traditions in the 12th century) in which he is a noble beast, werewolves were most assuredly creatures of fantasy and fear, men turned into wolves either as divine punishment or as collusion with Satan.  Other “werewolf” sightings center around serial killers during the Middle Ages. Not a good start for our heroes.

In fact, it wasn’t until the 1970’s and the rise of the fantasy novels that werewolves started to be seen as sympathetic characters, transforming into the now-familiar sentient beings with an awareness of their humanity during shifting.  This gave rise to lycans in romance novels, where the pack-like nature and loyalty of wolves provides ample plot points for romantic interests.

But why do we now allow ourselves this sympathetic view of the human to animal transition?  Is it because we’ve broken all other barriers down, and now the only frontier left for us is that of the animal?  We openly discuss most aspects of our lives with friends and even neighbors now, so perhaps we are searching for something deep within our subconscious.  We are no longer content to keep these creatures as part of a dark nightmare; they are part of us, and we them.

This brings me back to my original question:  why do we like the concept of the werewolf in romance, particularly?  This deserves a look into why we read romance to begin with:  we like fantasies.  We want to be transported to a world that we know isn’t real, a world in which there is no laundry to fold, no dinner to cook, no chores to be done.  A world in which we know that the man will not ask for directions, will always be in control, and will never (well, usually not) look to us for help.  We are free, in these worlds, to be wholly female, wholly primal.  We are not looking for the “safe” man in these novels; we are looking for the most feared or alpha-dominant in his pack.  The werewolf (along with other fantasy heroes and heroines) helps us to truly feel part of another world, one in which we are free to explore our wilder, more animal nature, and one in which the sensuality and sexuality are our primary drivers.

That, dear readers, is why we love our werewolves – they express the deepest desires of ourselves in a fully contained, safe, fantasy world. We love you, lycans, you hairy beasts.