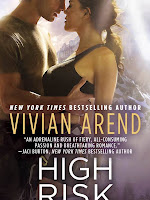 Eight months after a rock climbing accident that caused the death of her boyfriend Dane, Becki James is going to start a new position at David Landers's prestigious mountain climbing rescue training center. David's brother Marcus also has a climbing rescue group in Banff called Lifeline that has received much publicity lately, being called the “best of the best”. Only David doesn't know that years ago when Becki was in the training center as a student, she and Marcus had a steamy three day affair. Marcus lived many years saving the world in its hot zones, and only quit when an accident ended up with his losing about half of his left arm. Marcus's life is still filled with episodes of nightmares where he spends several days sleeping and fighting his inner demons. Despite his reservations, Marcus asks Becki if she will help his team with rope training during their upcoming boot camp. Marcus feels all the heat he remembers from their hot weekend, and it doesn't seem to have cooled down over the years. Despite that he feels he is damaged, Marcus decides Becki is worth trying to rekindle a relationship with.

After eight months, Becki still can't remember what happened during her last climb when Dane died. They still have not found his body, and her dreams will only take her so far. She hasn't climbed since then, but fortunately teaching is right up her alley. She vividly remembers her three day affair with Marcus, yet soon realizes they both have a lot of troubles they are still trying to deal with.

Becky and Marcus love training the Lifeline crew together before her job with the rescue training center starts, and she loves how Marcus takes such care of her when her nightmares overtake her. Working with the crew is exciting and lots of hard work, and soon everyone can tell something special is happening between them.

Vivian Arend is introducing us to the world of mountain climbing and rescues. If you don't know anything about rock climbing, as I don't, you will learn some of the basic terms and the excitement of a climbing rescue. I have read several of Ms. Arend's paranormal stories, and HIGH RISK is totally different, more modern, and with a much longer storyline. With both Marcus and Becki battling their demons and absent memories, they both have to deal with themselves and also the budding romantic relationship that cannot be ignored between them.

Secondary characters are David, Marcus's brother, and also all the members of Lifeline, all younger climbers who train constantly for saving someone in life-or-death situations.

HIGH RISK is the first in the Adrenaline series, and it is easy to see it is a high impact, action-packed series. Coming in September is HIGH PASSION, featuring Alisha and Devon, also members of Lifeline. The excitement of mountain rescues and the troubles that Marcus and Becki must overcome in their personal lives might be just what you're looking for this month.