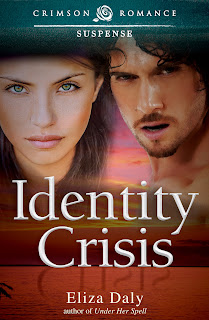 To celebrate the March 4 release of Identity Crisis, Eliza will be awarding one $20 gift certificate, and two $10 gift certificates, for either Amazon or Barnes & Noble to three randomly drawn commenters during her excerpt reveal tour March 4. Please include your e-mail address with your comment. Winners will be contacted on March 8. Good luck everyone!

When Olivia Doyle’s father dies under suspicious circumstances, rather than inheriting a family fortune, she inherits a new identity. She learns they were placed in the Federal Witness Protection Program when she was five years old. Her father was involved in an art forgery ring and testified against the mob. Brought up not to trust anyone, Olivia has a difficult time relying on U.S. Marshal Ethan Ryder to protect her, and to keep her secret. She fears her father may have continued his life of crime through her art gallery. She has little choice but to depend on Ethan when she realizes someone is now after her. Olivia’s search for the truth leads her and Ethan across country to a family and past she doesn’t remember.
At the age of ten, Ethan witnessed a brutal murder. He vowed when he grew up, he’d protect people in danger. Protecting Olivia is difficult when she won’t trust him. He soon realizes his desire to protect her goes beyond doing his job, but if his judgment becomes clouded by emotions, her safety could be jeopardized.
Can Ethan and Olivia learn to trust each other when they uncover secrets that will change their lives forever?
Identity Crisis is available at Amazon, Barnes & Noble, iTunes, All Romance, eBooks.com, and Kobo.

Father Clifford slipped a yellowed envelope from the side pocket of his vestment. “Your father gave this to me many years ago. Asked that I give it to you upon his death.”
She took the envelope from his hand. The organ music faded and a desolate, eerie stillness fell over the church, raising the hairs on the back of her neck. She tightened the shawl around her shoulders. She opened the envelope to find a letter and a newspaper clipping. She started with the letter.
Dear Livvy,
First, know that I loved you more than anything in this world. That’s why I hope someday you’ll forgive me for what I’ve done. Telling you the truth while I was alive could have put your life in danger. Now that I’m gone, I no longer fear for your safety. They would only have hurt you to get to me.
The only way to keep us safe was to enter the Witness Protection Program when you were five. Leaving our friends and family was the hardest thing I’ve ever had to do. I can’t stand the thought of you now being alone. I hope you’ll go back to our family, in the town where I grew up, Five Lakes, Wisconsin. I’d like to be laid to rest there, next to your mother. Please forgive me enough to grant me this one last wish. If you should ever encounter any problems, contact Roy Howard, the U.S. Marshal who relocated us, at 415-334-9076. I’m so sorry. Please believe you were the most important thing to me. You were my life. My Livvy.
Love, Dad
Olivia stood paralyzed, her mind racing, trying to comprehend the letter. Was this some kind of sick joke? For the past twenty-four years her dad had lived in fear that somebody would hurt them? What had forced him to leave behind everyone he’d loved? Everyone she’d probably loved, but obviously couldn’t remember. And if her mom wasn’t buried in San Francisco, whose grave had Olivia been visiting here all these years? She tried to hold the letter steady in her trembling hands. Of course it was vague. Her dad had been a man of few words. However, these few words expressed a lot of emotion, something he’d never been good at doing.
“Is everything all right?” Father Clifford’s voice penetrated her thoughts.
Concern creased the older man’s brow and from the curiosity filling his gray eyes, he had no clue what the envelope contained. Her dad hadn’t even trusted a priest with his secret. Her dad had been the only person she’d ever really trusted, and it turned out she hadn’t truly known him.
She merely nodded, unable to find her voice. She inhaled a deep breath. The scent of beeswax candles and incense did little to calm the panic racing through her veins. She unfolded a clipping from a Chicago newspaper, dated twenty-four years ago. The headline read Art Dealer in Bed with Mob Blows Whistle on Forgery Ring and Vinnie Carlucci. The article included a photo of police officers escorting her dad. She started reading the article.Prominent Chicago art dealer Andrew Donovan confesses to having sold more than a hundred forgeries …
Her stomach dropped. She slapped a hand over her mouth, certain she was about to vomit right there on the pew.
Her dad had been a criminal.
The nature of his crime made it all the more surreal.
She stared in disbelief at the papers in her hand. His name had been Andrew Donovan, not Alex Doyle. Her last name was Donovan. Was her first name actually Olivia? Instead of inheriting a family fortune, she’d inherited a new identity.
Or rather, an old one.


Eliza Daly’s first attempt at creative writing was in fourth grade. She and her friends were huge Charlie’s Angels fans and she would sit in her bedroom at night writing scripts for them to act out at recess the following day. She was Kelly Garrett. Fast forward to the present, she’s still writing stories about beautiful women who always get their men. The journey from fourth grade script writer to published author wasn’t an easy one, but it was always an adventure and the final destination was well worth it.


When Eliza isn’t traveling for her job as an event planner, or tracing her ancestry roots through Ireland, she’s at home in Milwaukee working on her next novel, bouncing ideas off her husband Mark, and her cats Quigley, Frankie, and Sammy.

WOW! I found the excerpt to be quite intriguing and informative. I want to know more! IDENTITY CRISIS sounds like an exciting read. Congrats on your debut!

My first job was in Milwaukee, Children's Hospital 16th & Wisconsin near Marquette University. I loved visiting the lakefront, concerts at Summerfest and Germanfest.

Thanks so much for having me at Romance Reviews Today to celebrate the release of Identity Crisis. I'm so excited the day is finally here!

Laurie--Thanks so much for reading the excerpt and for the congrats. My entire family invades my home every August for Irish Fest. I love the ethnic festivals. Milwaukee is a great place to be in the summer. However, I wish winter was over. :-) Thanks for stopping by!

Great excerpt! It really grabs your interest and makes you want to know more.
castings at mindspring dot com

Hi! You are a new to me author, which I love finding! Your book sounds really great. Look forward to reading it.

Thanks so much for popping by everyone and reading the excerpt for Identity Crisis. I had a great time here celebrating the release. Wooohoo!