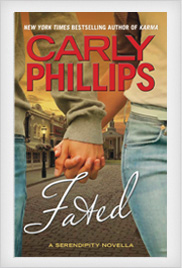 Kate Andrews has been asked out several times by Nick Mancini, but each time she’s turned him down because everyone in town knows that he’s not over Faith, her best friend. Kate has no intention of being Nick’s rebound woman, even though she has been in love with him for a long time. But Nick is persistent…

Nick was crushed when Faith spurned him, but he’s gotten over it. Since then, he can’t help but notice Kate, yet she continues to rebuff him. How can he convince Kate that he’s ready to move on…with her?

One initially can’t blame Kate for being leery of getting involved with Nick on the rebound. The months have come and gone, with Nick asking her out from time to time. To their friends it’s evident this couple has chemistry that is off the charts, but Kate has trust issues, and Nick wasn’t sure at first that he was up to getting involved with another woman. Yet the more he gets frustrated by Kate’s rejections, the more he is determined. With a little help from Faith, he finally hopes to get a chance to be alone with Kate and prove that she’s the one he wants. Will he succeed?

It’s a return to Serendipity for readers in FATED. Nick had famously been rejected by Faith for the man who is now her husband (SERENDIPITY released Sept 2011), and months later, he realizes it is Kate he’s now attracted to. While a short story, FATED still sizzles with the very much apparent chemistry between Nick and Kate. But how can he convince her to take him seriously when she won’t even be alone in the same room with him?

FATED leads into the next set of the Serendipity series from Carly Phillips, with PERFECT FIT out within the next month. FATED is a taste of what readers can expect, and it’s a delectable treat I highly recommend.