Q & A with Loucinda McGary...and a contest!! 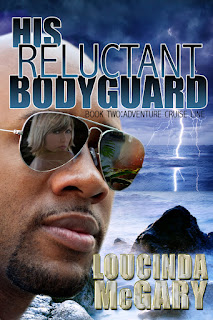 Thank you for having me as a guest on your blog today. I'm excited to be here and talk about my newest ebook release!

His Reluctant Bodyguard is the second book in my Adventure Cruise Line series. This book and my previous one, High Seas Deception are romantic suspense/thrillers set (at least partially) on fictitious cruise ships. I love cruising and thought readers might enjoy stories that use a cruise as a backdrop.

This is a reunion story, which I've never written before. The heroine, Avery Knox and the hero, Rip Pollendene knew each other in college ten years before His Reluctant Bodyguard opens. Neither of them ever acted on their attraction and they both regretted it. Fate seems to have thrown them back together, only to tear them apart. Rip has been summoned back to his birthplace, the Caribbean island of Benezet, which is on the brink of a civil war. Avery has just started her new assignment as cruise director of the Valiant, and has familial responsibilities of her own. But the two of them can't deny the potent allure of the other. Nor can they ignore the fact that someone is out to kill Rip!

I learned that voodoo is still common in the Caribbean islands.
I also learned that I have more difficulty coming up with French names than Celtic names. Deciding on names for secondary characters in His Reluctant Bodyguard was a real challenge for me.

Since I was nine years old, before that, I printed. But seriously, I started writing stories as a kid. However, I did not take my writing seriously until many years later. Finally, at the end of 2003, I quit my day job to pursue my dream of writing and publishing novels. My first sale to a publisher happened four years later in Sept. 2007, though the book wasn’t released until Oct. 2008.
His Reluctant Bodyguard is my 5th published novel and 6th published work.

When I sold and released my first novel (The Wild Sight) back in 2007 and 2008, most of my friends and acquaintances were quite surprised. Very few people outside my immediate family knew that I wrote anything besides memos and business letters.

As for authors, some of my early favorites were Phyllis A. Whitney, Victoria Holt, and Mary Stewart. Reading their books instilled my love of romantic suspense. I also loved Terry Brooks’ early work (the Sword of Shannara Series), and it inspired me to add elements of fantasy in my work. I was also (and still am) a huge fan of Diana Gabaldon’s Outlander series.

My DH and son are very supportive even though neither of them read fiction. They have both talked my books up to co-workers and friends, and helped me with speaking engagements and book signings. Several of my nieces and even a couple of their husbands have enthusiastically read my books. I have actually named characters after several of them.

My other great passion is travel. My DH and I have thus far visited 47 of the 50 states, and been to 34 foreign countries. We’ve been to Europe, Asia, Central America, Australia and New Zealand. Technically, we were also on the African continent once when we took a day trip to Morocco, and we’ve been close enough to see South America (Venezuela) though we haven’t set foot there yet.

I’d love for you to visit my newly updated website: www.LoucindaMcgary.com

Finally, you can see some of my travel pictures on my personal blog, Aunty Cindy Explains It All: www.auntycindy.blogspot.com
I LOVE to hear from readers! Please stop by and say hi.

Today, I am giving away a free download (either Kindle or Nook) of His Reluctant Bodyguard to one randomly selected commenter. Plus, everyone who comments will be in a drawing for a $20 gift card which will be given away at the end of my blog tour (Dec.5th).

The last person cruise director Avery Knox expected to see aboard her very first trip out on Valiant is former college football star, Rip Pollendene. A decade ago, she had turned down his advances at the University of Miami and lived to regret her decision. Why is she so reluctant to take the second chance she’s been handed?

Rip Pollendene is the heir apparent to a beautiful island nation. But it’s a heritage Rip has ignored and rejected for twenty years. Now his homeland is on the brink of a bloody civil war with outside forces trying to manipulate the outcome. Is that why someone wants him dead?
How much should Rip sacrifice for a country he hardly knows? And is it sheer coincidence that has thrown golden girl Avery Knox back into his life? Can they stay alive long enough to find out if their love really is meant to be?

Blessed with the gift of “Irish Blarney” Loucinda McGary (everyone calls her Cindy) became a storyteller shortly after she learned to read. If she didn’t like the way a story ended, she made up her own ending.

A long-time reader of romances, Cindy discovered and joined Romance Writers of America in 2001. But her stressful career as the manager of a multi-million dollar State and Federally funded program prevented her from doing much writing or traveling. She still managed to squeeze in a little of both, but not enough of either to be truly satisfying. Finally, at the end of 2003 she decided to take an early retirement from her career to fully pursue her twin passions of travel and writing.

On Sept. 14, 2007 Cindy received “the call” from an editor that changed her life, and she sold her first book (actually the third book she’d written since she left her job four years earlier). The Wild Sight was released Oct. 2008 and received a rare and coveted starred review from Publishers Weekly magazine. It also went on to win the “Best First Book” category in the More Than Magic contest. In 2010, the electronic version of Wild Sight became an Amazon bestseller in their Top 100 of all books.

In Sept. 2009, her second published novel, The Treasures of Venice was released. This story previously finaled in the prestigious Golden Heart contest in 2006 under the title Jewels of the Madonna. Treasures of Venice went on to win the Judge a Book By Its Cover contest and to final in several other regional contests.

Cindy likes to set her novels of romance and suspense in some of the fascinating places she has visited. To date, she has visited 47 states and 32 foreign countries.

I love Lucinda's books... I have a few more downloaded on my Kindle to read.. She was one of my fav finds this year..

HUGS, Kathleen!
So happy to see you here on my blog tour! Your support means so very much to me, and I hope you enjoy His Reluctant Bodyguard.

Ah, AC! SO exciting to be celebrating His Reluctant Bodyguard with you! Can you remind me how the Adventure Cruise Line stories are connected?

Also, out of curiosity, which 3 states have you yet to visit? And which countries are at the top of your wishlist to see next? :)

HUGS, Fedora!
So happy to have you here helping me celebrate!
My newest heroine, Avery Knox was the roommate and best friend of Skylar Davidson in the first ACL book, High Seas Deception. Avery was such a fun character! I hope you enjoy her adventures in His Reluctant Bodyguard.

The states I haven't visited yet are West Virginia, Connecticut, and Rhode Island. Hope to get there VERY SOON! As for the top of my wishlist to visit -- the pyramids in Egypt. Yet another reason to pray for peace in the Middle East! ;-)

I very rarely read romance novels, but I read the first in this series and gave it a high review. What strikes me about it is how well I remember it, and for someone who averages a book a day, that is quite an endorsement of Cindy's work. What surprised me was her ability to balance the female and male main character in a manner that allowed each to be a champion of the reader.

Hi Loucinda, Nice interview. I had a tough time finding French names too. Have you looked here? http://www.20000-names.com/
It's a great resource.
Rose

Congrats on the release, Aunty Cindy. You need to take me with you on your next cruise.

Hi Linda!
Thank you so much for the endorsement and the great review of High Seas Deception! Since you worked with law enforcement, it means a lot that you enjoyed the story! I hope you like His Reluctant Bodyguard too. ;-)

Appreciate you taking the time to visit here today.

Hi Rose,
Thanx a BUNCH for the resource! I'll definitely use it for future secondary characters. It's funny, but my main characters always appear to me with their full names intact!

Appreciate you dropping by today and hope you enjoy His Reluctant Bodyguard.

Jane!
HUGS! I hope you and your family didn't suffer too much in that horrible Hurricane Sandy.

Thanx so much for dropping by today. I'd LOVE to take you on my next cruise... What are you doing in about 2 weeks? ;-)

Hope you enjoy His Reluctant Bodyguard!

Thanx a bunch for stopping by, Patricia!

I really appreciate all your support and am so glad you enjoyed His Reluctant Bodyguard!

All the best,
AC

Another new to me author! I love finding them and their books. This one looks really great. Thanks for the chance.

bn100,
Thanks for stopping by. Glad you enjoyed the interview and hope you like His Reluctant Bodyguard!

Hi Martha,
Appreciate you stopping by to comment. Hope you enjoy His Reluctant Bodyguard!

I like how you are able to incorporate your love of travel into this cruise line series. Wow! I hope you do get to the last 3 states and to see the PYRAMIDS.

HIS RELUCTANT BODYGUARD - thriller set in the Caribbean... sounds exciting!

Thanks for dropping by, Laurie G!

I'm sure I'll get to the 3 states fairly soon, but I'm not so confident about the pyramids. :-( I've been to a few dangerous places in the past (but never when I felt in danger -- BIG difference), but right now all of the Middle East is off my travel docket.

Hope you enjoy my book.

Since I can't actually go on a cruise anytime soon, I love that I can pretend I am. Congrats on all of your wonderful work!